Zuccotti Park, the base of the Occupy Wall Street protests, has emerged as a dramatic contrast to the everyday tourist bustle and business suits of lower Manhattan. A palpable energy radiates from the encampment, and its borders are brimming with its charge: the edges of tarp tents, protestors with rallying cries, cardboard signs pasted to wooden paint stirrers.

Anger and frustration are the fabric of this movement, and within the park so many protestors tell stories of financial hardships, both their own and those of their friends and family. Many in Zuccotti Park are the direct victims of this current economic instability – the unemployed, the uninsured, the homeless, and a cross-section of the city’s residents just trying to make ends meet. All are fed up with the systemic inequities that drive the ever-widening income gap in New York City.

In support of these men and women, the Coalition’s mobile soup kitchen has begun taking a small detour on its lower Manhattan route to serve warm, nutritious meals to homeless and hungry protestors. Many of the street homeless normally lining up at our South Ferry stop have migrated to Zuccotti Park, finding solidarity and safety in the encampment. Our Mobile Outreach workers continue to reach out to these individuals and other protestors, referring those in need to free food assistance, free showers, medical care or public benefits help, both at the Coalition and at other organizations.

Coalition volunteers also distributed spare blankets to protestors, many of whom are without sleeping bags, tents or extra clothing. Protestors have occupied Zuccotti Park for over three weeks, and more are arriving as the protest’s message resonates throughout New York City and across the country. As fall weather sets in and the days become colder, the blankets and food, as well as other necessities such as clothing, medical supplies, and utensils are the rudimentary – but requisite – fuel to the movement’s growing momentum.

By delivering meals to the homeless and hungry people who have joined the protest, and through our small blanket donation, the Coalition has offered much needed support to the struggling individuals and families who demand their voices be heard.

[Note: None of the support offered to the protest impacts the Coalition’s daily direct service programs for homeless and at-risk men, women, and children.]

Yesterday, the Coalition for the Homeless joined hundreds of people from community organizations, unions, and Occupy Wall Street on a tour of the homes of some of New York’s billionaires. Rupert Murdoch, David Koch, and JPMorgan CEO Jamie Dimon were among those visited (all conveniently located on the Upper East Side). 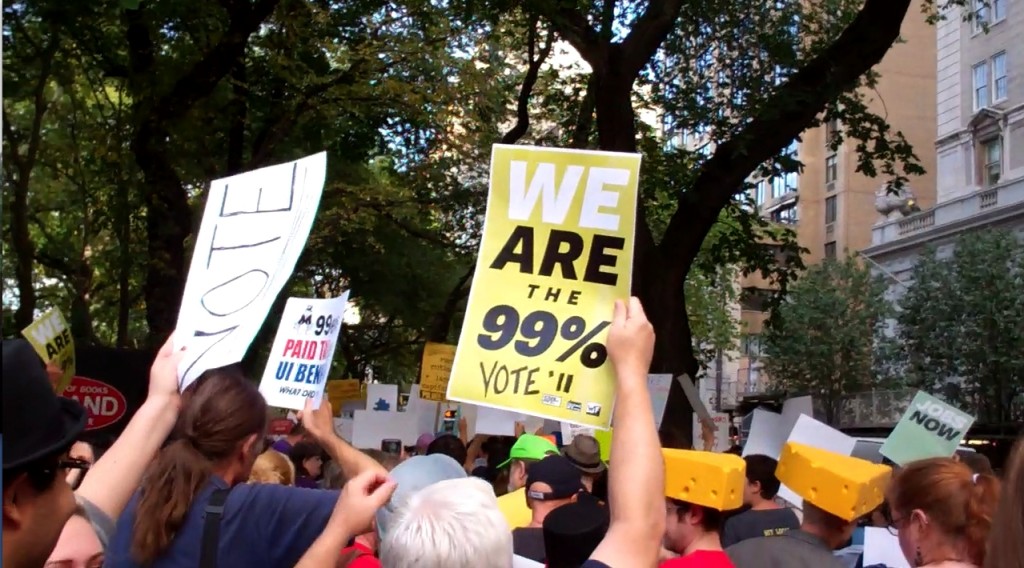 They were paid a visit because at the end of this year, the State millionaire’s tax is set to expire, essentially giving New York’s wealthiest a major tax break, while income inequality is at the highest level since the Great Depression and services for New York’s most vulnerable citizens are being cut left and right. So far, Governor Cuomo has expressed no willingness to renew the millionaire’s tax.

While we didn’t get to see the insides of their apartments, we did make our message known on the streets and outside their buildings: Now is not the time for billionaires and millionaires to be getting a tax break, while the rest of New York is suffering under service cuts to homeless kids, increased hunger and poverty, teacher layoffs, and massive unemployment.

Coalition for the Homeless will continue to push the Governor and the State to renew the millionaire’s tax and implement fair-share fiscal policies that benefit all New Yorkers, including our most vulnerable.

Yesterday Coalition for the Homeless joined organized labor, community groups, and thousands of New Yorkers for an historic march and rally to support the Occupy Wall Street protesters, who are in their third week encamped at Zuccotti Park in the heart of Manhattan’s Financial District.

The march began in Foley Square, where #OccupyWalStreet members marched to join thousands of people representing the city’s largest labor unions, community-based organizations, advocacy groups, and service providers. We all then marched down to Zuccotti Park, at Broadway and Liberty Street, for an early evening rally. 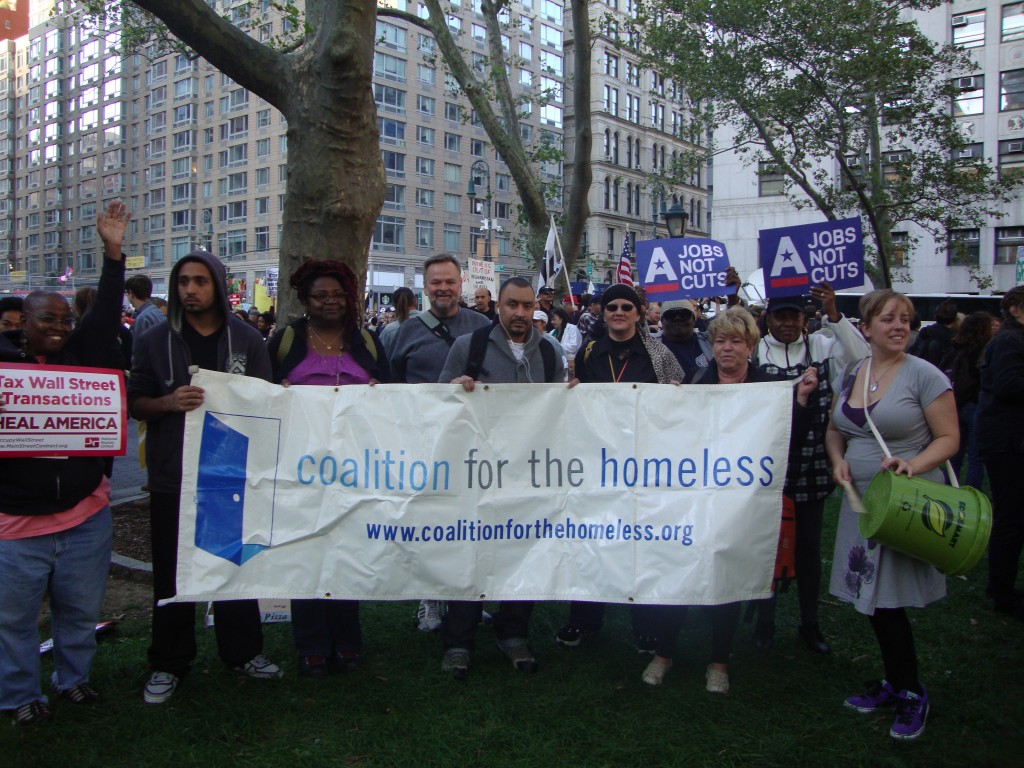 Unionized teachers, janitors, health care, transit and communications workers will join advocates for the homeless and immigrants and students from across the city (who are walking out of classes) in a surge that could provide a boost to a fledgling movement that has widely exceeded the expectations of most observers.

“I’m just looking at it as the possibility for the movement to shift into a higher gear,” said Mary Brosnahan, executive director of the Coalition for the Homeless. “The taking over of Zuccotti Park has really captured the attention and imagination of America, and we want to get behind that in a tangible way.”

The Coalition joined many of the groups involved in the May 12th Wall Street protests to deliver the message that banks and the wealthy need to pay their fair share instead of more cutbacks to vital services for homeless and low-income people. Most important, in the midst of record homelessness, high unemployment, and State and City budget deficits, New York should not be cutting taxes for the wealthiest households. Michael Kink, executive director of the Strong Economy for All Coalition, makes the case against eliminating the “millionaires tax” in an Albany Times Union op-ed:

It’s not right to cut taxes on the well-off during a fiscal crisis, particularly when we’re cutting aid to schools, seniors and survival services for homeless children. If poor and working people are going to take a hit in tough economic times, it shouldn’t be to pay for more tax cuts for millionaires and billionaires.

We need the same thing in New York.

Right now we’re scheduled to give a $5 billion tax cut to the richest New Yorkers on Dec. 31. We’ll revert to a single 6.85 percent tax rate on marginal income for all households making more than $40,000 a year.

As a result, we’ll lose the progressive, fair-share tax rates implemented after the economy collapsed and state deficits exploded in 2008.

Coalition for the Homeless will continue to fight for a balanced approach to New York’s fiscal constraints, and to protect the most vulnerable New Yorkers. And we’ll continue to work with the Beyond May 12th Coalition and to support the Occupy Wall Street protesters as we demand that banks and the wealth pay their fair share. As the Crain’s New York article noted:

Ms. Brosnahan, of the Coalition for the Homeless, said that the labor and community support could help push the protest to new heights.

“There is genuine, palpable anger out there,” she said. “It’s not in isolated pockets. People are fed up. I doubt this group wants to remain there forever saying they’re angry. At some point it needs to be funneled into constructive steps. That’s what I hope will happen.” 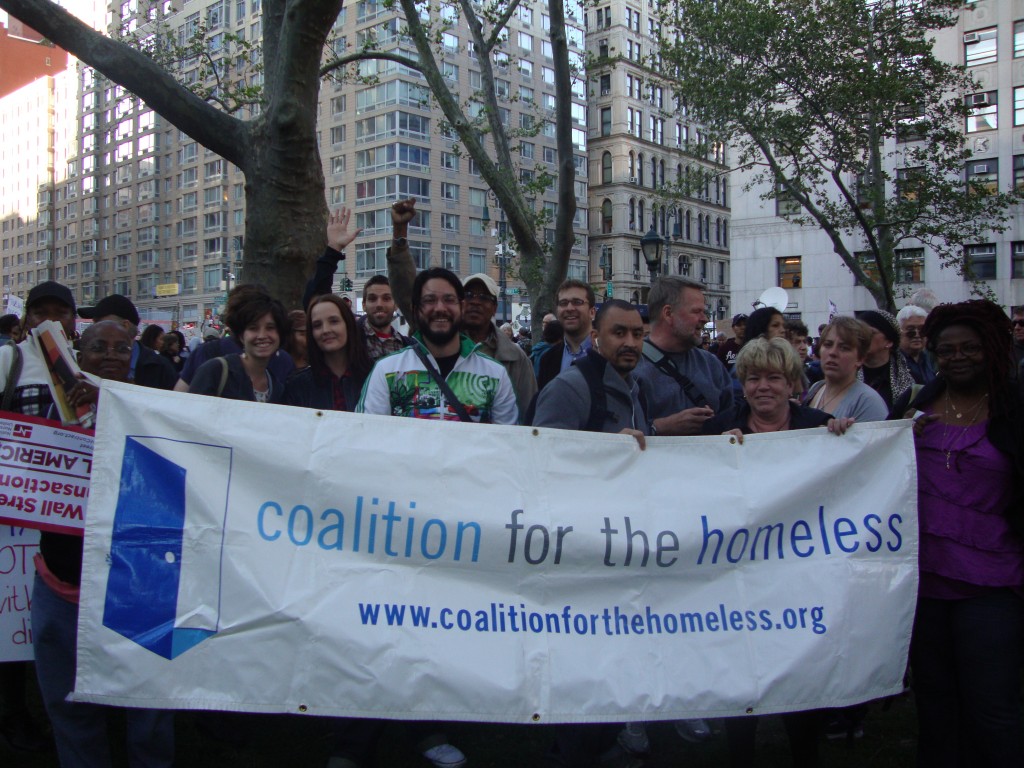