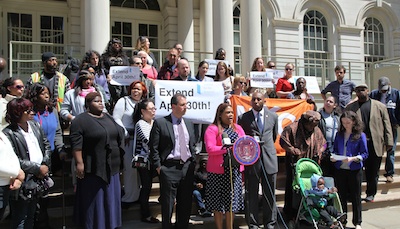 The Coalition joined with Annabel Palma, Donovan Richards, Brad Lander and Stephen Levin on the steps of City Hall today to fight for an extension in the April 30th deadline for Hurricane Sandy victims currently staying in hotels.

For six months, thousands of Sandy survivors have been scattered across the city, sleeping in hotels after one of the worst storms in history destroyed their homes. After months of delay City officials finally drafted a permanent housing plan for these families, but for many it will come too late.

That’s because Bloomberg officials announced that this Tuesday, the City will stop paying for the hotels sheltering hundreds of Sandy families — even if a family has no other housing option.

With a record 50,000 New Yorkers already jammed into NYC homeless shelters, this is the worst possible moment to make even more families homeless.

The Coalition drafted this petition to Mayor Bloomberg, which we will deliver on Monday, asking the Mayor to please extend this arbitrary deadline to keep Sandy victims safe and off the streets until the housing he promised is ready for them.

Here is the press release for the event:

THE COUNCIL OF THE CITY OF NEW YORK

COUNCIL MEMBERS, ADVOCATES, AND OTHERS RALLIED AGAINST THE MAYOR’S PLAN TO END THE CITY HOTEL PROGRAM FOR VICTIMS OF SUPERSTORM SANDY

Council Member Annabel Palma, Chair of the City Council’s General Welfare Committee, along with her colleagues in the City Council, advocates, and others rallied today on the steps of City Hall to demand that Mayor Bloomberg extend a temporary housing program for Superstorm Sandy victims until they can return to their homes or move in to other permanent housing.

In November 2012, the City created the City Hotel and Interim Placement Program (“City Hotel Program”) to provide shelter for Sandy victims. Last month, the roughly nine hundred households living in hotels under this program were notified by the Administration that the program would end on April 30.

The City has made available to the Sandy victims various options for more permanent housing, including 150 Section 8 vouchers and 400 apartments in the New York City Housing Authority developments. But, as of mid-April, nearly 600 households continued to live in the hotels.

“I am thankful that the Administration has identified so many long-term housing resources for Sandy victims,” said Council Member Palma. “But it is clear that many will not be able to access these resources by the April 30th deadline and others will never be eligible. Extending the City Hotel program will give some peace of mind to families who cannot afford to have their lives uprooted once again.”

The Federal Emergency Management Agency (“FEMA”) created a separate hotel program, known as the Transitional Sheltering Assistance program, which, at its peak, provided shelter for over 5,000 households affected by Superstorm Sandy. Earlier this week, at the request of the State of New York, FEMA announced that it would extend its hotel program until May 29.

“Although agencies have made great strides in assisting New Yorkers in the ongoing Sandy recovery, hundreds of families still rely on the City Hotel Program because they do not have a home to return to,” said Council Member Gale A. Brewer. “Needless to say, it is difficult to live under their current circumstances but it is even more challenging to find an affordable apartment or to be matched with alternative housing options. Given this reality, it’s essential that the Administration extend the April 30 deadline – just as New York State has sought to do with the FEMA hotel program. Without more time, these families will find themselves with no alternative beyond our already over-burdened homeless shelter system.”

“These are our fellow citizens who have nowhere to go,” said Council Member Donovan Richards. “This is the mother who would be left in the street while she struggles to save the money she needs to make her home livable. This is the full-time minimum wage worker who is one step away from homelessness after the storm destroyed everything he owned. These are the people who have been hit hardest by Hurricane Sandy and we cannot forget them.”
“Since Hurricane Sandy, my office has been working to support people displaced by the storm,” Council Member Brad Lander said. “Many have been housed in shelters and hotels in my district. We were deeply disturbed to see the eviction notices, and to learn that the City plans to put many of them out on the street at the end of April. Why does the Bloomberg Administration keep implementing policies that mean more homeless New Yorkers?”

“Kicking Hurricane Sandy victims out of hotels before other housing options are available is stupid, cruel, and counterproductive,” said Giselle Routhier, Policy Analyst at Coalition for the Homeless. “Many of those who have been kicked out of hotels are now in unsafe living conditions and the City is risking sending hundreds more storm victims into already crowded homeless shelters if it does not extend the April 30 deadline.”

“After the devastation that Hurricane Sandy wrecked on New York City, it is crucially important that the victims that have been displaced continue to have adequate shelter until they can return to their homes,” said Council Member Stephen Levin. “I want to thank Council Member Palma for holding an emergency oversight hearing on this issue so that Sandy evacuees have more time to get back on their feet.”

Wednesday, April 17, more than 300 guests filled the Grand Ballroom of The Pierre Hotel for the Coalition’s Women Mean Business Luncheon, a benefit for our First Step Job Training Program. Buoyed by an exciting keynote address from Gloria Feldt and the enthusiastic participation of corporate honoree Deutsch, this year’s event was our most successful ever!

The event was emceed by Coalition board member Laurence Boschetto, CEO of Draftfcb, who welcomed guests with a moving account of his company’s long commitment to providing internships and jobs to First Steppers, and his own deeply felt convictions about the importance of empowering women in the workplace.

Mary Brosnahan, the Coalition’s President & CEO, then introduced a short video telling the inspiring story of Shakira Kennedy, a young mother and recent graduate of the program whose life was transformed by First Step and her success in finding a rewarding full time job at Touro College of Pharmacy. 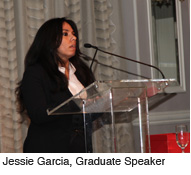 Following Shakira’s video, Graduate Speaker Jessie Garcia took the stage and described her heart-wrenching journey from an abusive upbringing, being thrown into the foster care system and separated from her siblings, escaping another abusive relationship with two children and nowhere to go but a shelter, and finally coming to First Step. Jessie is now one of the Coalition’s most valued full-time employees, working with formerly homeless families in the lauded Rental Assistance Program. She said that thanks to First Step, “I speak a little louder, I stand a little taller, and when I cry, it’s out of happiness.”

The highlight of the event was a rousing speech by keynote speaker Gloria Feldt. She encouraged women to embrace power to make change in their lives and the world around them. She acknowledged that while it may not be an easy path, and there are many mistakes along the way, “there’s always another chance to take the first step!” 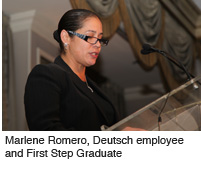 This year’s Corporate Partnership Award was given to Deutsch by First Step graduate and Deutsch employee Marlene Romero. As an internship provider and Corporate Day host, Deutsch clearly understands the many obstacles women in our program face. Deutsch has shown tremendous commitment to offering a supportive environment for women to learn new skills and adjust to the workplace. We are very grateful for their dedication to the women of First Step!

At the end of the event guests were given gift bags filled with treats from our generous and amazing sponsors: Smashbox, Bumble and bumble, Alecia Bakery, Crunch Gym, Kimani Press, Lane Office and Frankfurt Kurnit Klein & Selz PC. It was our most successful luncheon to date in so many ways, and we extend our most heartfelt thanks to all of the guests and sponsors who made this inspiring event possible!