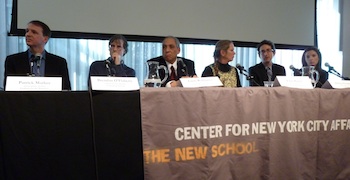 Coalition for the Homeless and the Center for New York City Affairs at The New School co-sponsored a policy forum today analyzing record family homelessness and detailing housing-based solutions that Mayor-elect de Blasio can enact.

Coalition for the Homeless also offered a presentation describing the scale of the family homelessness crisis, the major causes, and recommended policy reforms for the new Mayor. The presentation can be downloaded here (PDF).

An op-ed in the New York Daily News is right on point. It highlights the severity of the NYC homelessness crisis, and offers Mayor-elect Bill de Blasio three broad principles to guide his efforts to stem the tide of rising homelessness.

Here are the highlights of Blake Zeff’s insightful essay:

1. Legitimize the issue by raising its profile. It has been a long time since a New York City mayor — or almost any major politician, really — has spoken openly, consistently and compassionately about the needs of the homeless. That’s largely because they have far less political power, financially or electorally.

Speaking about the city’s legal obligations to provide shelter for the homeless, Mayor Bloomberg famously groused, “You can arrive in your private jet at Kennedy Airport, take a private limousine and go straight to the shelter system and walk in the door, and we’ve got to give you shelter.”

By using the bully pulpit to explicitly enunciate the need to help the homeless, de Blasio can elevate the issue and give the problem national attention — as Bloomberg did with gun violence.

Simultaneously, it’s important to educate people about the actual shape of a chronically misunderstood problem. For many, their perceptions of the homeless are confined to images of people on streetcorners or subways asking for money.

In fact, more than one-third of the city’s homeless population — as many as 22,000 each night — are children, some of whom travel huge distances from shelters in one borough to schools in another. According to the Coalition for the Homeless, as of September, there were over 12,000 homeless families in New York.

The mayor-elect can signal a new era by publicly visiting shelters, speaking up for the restoration of cuts to SNAP (the federal program that administers food stamps), and generally expressing more empathy for those New Yorkers than his recent predecessors have.

2. Focus as much on preventing homelessness as on reacting to it. Obviously, a robust response to the homelessness problem will rely on finding solutions to those New Yorkers already in need — but it’s critical to also work aggressively to avert further incidences before they begin.

A key ratio when it comes to housing affordability — rent versus wages. While lower rent is obviously addressed by increasing the supply of reasonably priced units, often overlooked is the other part of that equation — raising the floor of New Yorkers’ wages, an urgent priority in a city where 46% are either at or hovering near the poverty line.

Early signs of de Blasio’s approach in this regard are very encouraging. His emphasis on tackling inequality has included an effort to achieve a humane minimum wage, and he has supported fast-food workers in their quest for a living wage.

With nearly half of homeless New Yorkers having experienced a reduction or loss of public benefits before they entered shelters, protecting endangered social programs will also be critical. Ditto for anti-eviction legal services.

3. For those already homeless, work aggressively to boost the housing supply. Of course, for too many New Yorkers, prevention efforts will come too late. That’s where basic supply and demand calculations come into effect. To meet demand, de Blasio must reverse the Bloomberg administration’s policies of declining federal assistance and backing away from permanent housing solutions.

Specifically, he ought to alter the city’s policy and produce more units, by restoring priority access to Section 8 vouchers and NYCHA vacancies for homeless New Yorkers.

He should set aside, and have the city subsidize, housing units for the poor and very poor, as former Mayor Ed Koch did. This is particularly essential at a time when half a million New Yorkers are on the waiting list for public housing while fewer than 6,000 apartments open up each year.

And the mayor-elect should remove onerous eligibility hurdles for getting into shelter that have blocked vulnerable children and families.

We talk a lot about a mayor’s role on issues like policing and education, and rightly so. But after a campaign that shined a light on inequality and captured the public imagination, a legacy of providing New Yorkers with the basic dignity of a home could be just as historic.