The Coalition for the Homeless joined dozens of housing advocates at City Hall yesterday for the release of the Real Affordability for All policy platform. The campaign is urging that Mayor de Blasio’s soon-to-be-announced housing plan embrace strategies to create real affordability for the lowest-income New Yorkers. 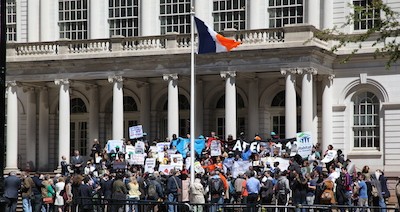 The strongest evidence of the worsening housing affordability crisis is the historic level of homelessness in the city. Every night more than 53,000 New Yorkers, including nearly 23,000 children in approximately 12,000 families, sleep in homeless shelters. These are the highest numbers since the City began keeping records three decades ago, and the most since the Great Depression.

One of the primary causes of record homelessness in New York City is the widening gap between housing costs and incomes, as well as disastrous Bloomberg-era policies that eliminated all permanent housing resources for homeless families and children.

Today Mayor de Blasio and his administration have a unique opportunity to reverse these failed polices by embracing the cost-effective housing-based solutions that have been proven to reduce the number of homeless families and individuals in shelter.

As the Real Affordability for All coalition released in the policy platform, this comprehensive effort must include the following initiatives that will help stem the crushing tide of homelessness:

On April 3, the Coalition for the Homeless held the 20th Annual Women Mean Business Luncheon. Four hundred caring New Yorkers – from business leaders to government officials to social activists – attended the event, which raised an impressive $239,000 to support the First Step Job Training Program for homeless and low-income women.

Event emcee and Coalition board member Laurence Boschetto warmly welcomed the guests and highlighted the tremendous accomplishments of the First Step program. First Lady of New York City Chirlane McCray gave a stirring keynote address, commending the graduates on their commitment and resilience and pledging to use her influence to reduce homelessness in the city.

This year’s graduate speaker, Rosalind, bravely told her life story and how she came to First Step. After graduating high school, Rosalind left her home in Antigua and Barbuda to come to America to pursue her career, only to have her dreams put on hold for nearly twenty years by one setback after another. With the help of First Step, she was able to overcome all of her past difficulties and now has a career she loves – and is an inspiring role model for her teenage daughter.

Another high point of the event was the premier of our most recent video profile, featuring First Step graduate Lakisha. Lakisha’s challenges started young, as she lost her father to a drug overdose when she was only seven years old – and then tragically a few years later, her mother to AIDS. Orphaned at such a young age, Lakisha was placed with a foster family who emotionally abused her. When she aged out of foster care, she found herself on her own without any support. She enrolled in First Step to refresh her skills and find her career passion. She was placed in an internship in the Coalition’s Eviction Prevention Program, where she discovered her own drive to help those in need – and was eventually hired into the position where she is a true star, beloved by her clients. Watch Lakisha’s story here:

The luncheon culminated in the presentation of this year’s Corporate Partnership Award to Kramer Levin Naftalis & Frankel LLP – one of New York’s premier law firms, which continues to provide internships, full-time jobs and financial support to First Step. They are true leaders in bringing compassion and corporate responsibility to our city.

We’re sincerely thankful to the attendees, sponsors, committee and board members, and First Step graduates who helped make our 20th anniversary event a wonderful success. The event wouldn’t have been possible without everyone’s incredible generosity!

New York City is creating a new rental subsidy to help tackle its unprecedented homelessness crisis. According to a draft of the proposal obtained by WNYC that the city sent to the Cuomo administration in March, the subsidy would be available to an estimated 1,400 to 2,800 families in which at least one member works full time, 35 hours a week.