A record 63,839 people, including 22,938 children, sleep in NYC shelters each night – and the length of time homeless New Yorkers spend in shelters before finding housing has increased. City data show that the average length of stay in shelters rose to 401 days for single adults, 438 days for families with children, and 561 days for adult families in fiscal year 2018 (see page 192 of the Preliminary Mayor’s Management Report).

Behind these grim figures are countless stories of New Yorkers who desperately want to move into homes of their own but have encountered barriers due to the lack of truly affordable housing throughout New York City. Even people who are eligible for rent subsidies often struggle to find landlords who will accept their vouchers, or to find any available apartments that are within the rent limits. Those who qualify for supportive housing, which is permanent housing with services for people with mental health, substance use, or other issues, face lengthy waits due to the slow production of supportive housing units that have been promised by the City and the State – largely the result of needless political delays that disrupted the crucial supportive housing pipeline.

In order to help homeless New Yorkers find permanent, stable housing more quickly, the State and City must accelerate their timelines for creating supportive housing. The State must also ensure that the Home Stability Support rent subsidy program is funded in this year’s budget, as it will replace existing rent subsidies and bridge the difference between the inadequate public assistance shelter allowance and actual rents for households facing eviction, homelessness, or loss of housing due to domestic violence or hazardous conditions. The City must also realign its 300,000-unit Housing New York 2.0 plan with the reality of record homelessness by increasing the number of affordable apartments set aside for homeless New Yorkers to 30,000 units, with 24,000 of those units to be created through new construction – as the House Our Future NY Campaign has repeatedly urged the Mayor to do. Together, these commonsense policies would allow more households to quickly move out of shelters and into homes of their own.

But as of this January all three populations the city tracks — single adults, adult families and families with children — were staying in shelters longer than under Bloomberg. Single adults now stay an average of 14 months — four months longer than in 2013, and the longest in city history, according to data provided by the de Blasio administration. Adult families and families with children are spending 19 and 15 months on average — three months more than in 2013, and also longer than ever before with the exception of last summer. (The number of families in the shelter system usually rises when children get out of school.)

In the past, the state and the city created supportive housing together under the so-called New York/New York agreements. Now, the two are going about it separately. Governor Andrew Cuomo and Mayor de Blasio have committed to building 20,000 and 15,000, new units of supportive housing over a period of 15 years, [but] they aren’t being built fast enough. Last year, the city made fewer placements in supportive housing than at any time in the past fourteen years.

A chorus of chants echoed through the state Capitol building over back-to-back days this week as activists called on Gov. Cuomo to take action on a measure to combat homelessness.

The clanging of cuffs closing over wrists accompanied the cries late Tuesday as a dozen protesters were arrested for refusing to leave a chamber outside the governor’s office at closing time. Members of VOCAL-NY and other grassroots groups held the so-called “24-hour vigil” Tuesday and Wednesday to encourage Cuomo to include funding for the Home Stability Support program, which would create a new rent supplement to keep people in their homes, in this year’s budget.

With State budget negotiations in their final weeks, a growing chorus of elected officials from all levels of government are calling for the budget to include Home Stability Support (HSS). This proposal, initially introduced by Assemblymember Andrew Hevesi in 2016, would reduce homelessness by bridging the difference between the inadequate public assistance shelter allowance and actual rents for households facing eviction, homelessness, or loss of housing due to domestic violence or hazardous conditions.

Last week, the Senate and Assembly each included HSS in their one-house budget bills. Shelly Nortz, Coalition for the Homeless’ Deputy Executive Director for Policy, praised their support for this vital program:

“Home Stability Support is the single most important thing Albany can do this year to address the homelessness crisis in New York State, which affects more than 250,000 men, women, and children each year. This sensible program could help keep nearly 80,000 families in their homes or in escaping homelessness, and it would pay for itself by reducing evictions, shortening shelter stays, and reducing other social and public service costs of displacement.  We thank the Senate and Assembly for including HSS in their budget proposals, and we call on Governor Cuomo to join them in supporting the best tool we have to fight homelessness.” 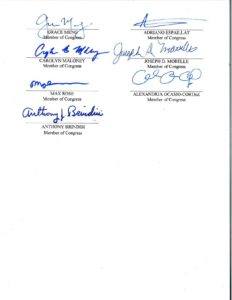 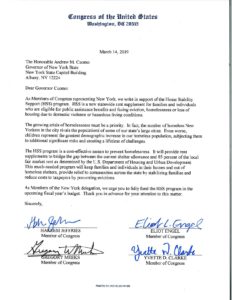 Denis Slattery wrote about the Congressional Delegation’s letter for the Daily News:

The 10 Democrats sent a letter to the governor asking him to include funding for the Home Stability Support measure, which would create a new rent subsidy to keep people in their homes, in this year’s budget.

The program is a “cost-effective means to prevent homelessness,” the group, led by Brooklyn Rep. Hakeem Jeffries, wrote. “This much-needed program will keep families and individuals in their homes and out of homeless shelters, provide relief to communities across the state by stabilizing families and reduce costs to taxpayers by preventing evictions.”

Among those calling for the full funding of the measure are freshman Reps. Alexandria Ocasio-Cortez (D-Bronx-Queens) and Max Rose (D-Staten Island).

The supplement would be applied to New Yorkers eligible for public assistance and facing eviction.

Assembly Social Services Committee Chairman Andrew Hevesi (D-Queens) has been fighting for the program for several years and is confident that it can work in this year’s budget, if Cuomo agrees.

“We’ve made an aggressive push, and I think we have a real shot,” Hevesi told the Daily News. “I believe that since Gov. Cuomo is the only person standing in the way that we have a very good shot this year.”