By Angie Caraballo, Bound for Success After School and Summer Day Camp 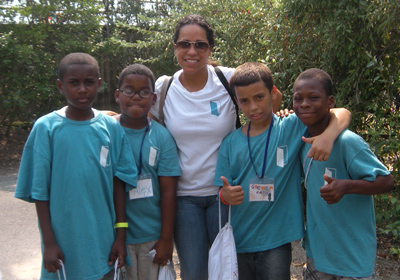 This past summer was full of fun and learning for 30 girls and boys living in a lower Manhattan homeless shelter, thanks to our Bound for Success (BFS) Summer Day Camp. We took trips, improved reading and writing skills and just had a great time.

Each week featured a new theme, and my favorite was “Under the Sea.” On Monday and Tuesday the kids researched different sea creatures, learning about their physical makeup and how they live. By mid-week, they drew pictures and wrote brief essays on what species of sea animal they would be and why. Their creativity and detail were remarkable! Then we capped off the week with a trip to the New York Aquarium, where they reveled in the beauty and spectacle of the underwater creatures. One 5-year-old said to me, “Miss Angie, I can’t believe how big these fish are! You see them in books, or at the store, but these ones are huge!”

Boys and girls often fall behind academically during the summer. Because BFS kids live in a shelter, they usually are already behind their peers in school. The constant moving from shelter to shelter and other stresses inherent in homelessness makes keeping up in school that much harder. That’s why we put such a huge emphasis on reading and writing activities. Reinforcing and building upon basic skills over the summer means BFS kids enter the new school year at a higher level than when vacation began.

As we move into September, BFS transitions into an after-school program. The first half of the afternoon is spent helping the students with their homework. We go over reading exercises and flash cards with one-on-one instruction. Then switch to fun recreational activities and a nutritious snack.

The recreational component has become increasingly important as families are staying in shelters longer. Now almost half of our girls and boys have been with BFS for over a year – by far the highest I’ve seen in my eight years with the program.

Living in a crowded facility with over 80 other families really wears on a child. While kids living in shelter form bonds and strengthen friendships, it is devastating to live with the stress of long-term homelessness. Many parents become depressed or angry. When it gets to be too much, kids often act out. Luckily, we’re there to pull them aside, talk to them, figure out what is going on and how we can best work with them to get through it. BFS gives stability to the children’s lives. Each afternoon they know they have safe a place to go with people they can trust. It makes a huge impact on how they are able to cope with all the uncertainties and shame that come with trying to live in the shelter system.

Last summer I worked with Brandon, who had been homeless for a few months. In trying to get him to participate, each morning our staff would knock on his door. But Brandon’s very shy and nervous about meeting the other kids – so every day he said, “No!” Finally, after much persistence, Brandon agreed to come with us up to Central Park one morning….and had a blast! A few months later, he was joking around with the other boys and creating his own games in the afternoons. Towards the end of the summer, he told me, “I finally feel like I fit in somewhere. Like I’ve got something to look forward to.”

Brandon’s family was transferred to another shelter (his third) back in April, but he still keeps in touch with us – coming to us with problems he is having adjusting to the new neighborhood and letting us know that he recently graduated from middle school. He grew so much in the year I worked with him. He opened up and let me and the other staff in – breaking out of his shell and morphing from a shy, fearful boy to a responsible young man. Kids like Brandon are why I love working at BFS. Our after-school program and camp make a huge difference in the lives of homeless kids. After being shuffled around the shelter system, they’ve completely lost what it is to be “home.” But BFS gives them a bedrock of stability and community. When I think back to the children I’ve met, there’s not one that we haven’t reached in a special way. Working at BFS is more rewarding than I could’ve ever imagined.

Many days, when parents come to pick up their children, they ask if it’s okay to come right back – because they want to be there as long as we are there.

You just can’t get that anywhere else!