Posted on November 22, 2016 by Jacquelyn Simone 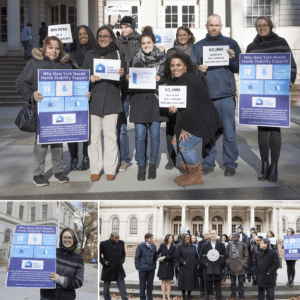 With a record 61,931 people in New York City bedding down in shelters tonight, and thousands more enduring homelessness elsewhere in the state, it is time for bold action to address the crisis. The widening gulf between incomes and rents has pushed more and more New Yorkers to the brink of homelessness. The affordability strain is particularly acute for households receiving public assistance benefits, with two-thirds of those living in private housing statewide struggling to pay rents that exceed their shelter allowances.

In response to this unacceptable reality, the Coalition for the Homeless joined State Assemblymember Andrew Hevesi, several City Councilmembers and Public Advocate Letitia James on the steps of City Hall today to show support for Hevesi’s Home Stability Support. This proposal would establish a statewide rent subsidy for public assistance households facing eviction, homelessness, or loss of housing due to domestic violence or hazardous conditions. 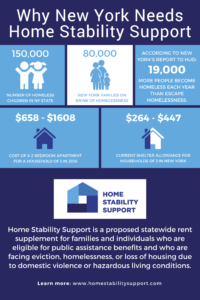 By helping to bridge the difference between the inadequate public assistance shelter allowances and fair market rents, Home Stability Support would protect tens of thousands of New Yorkers statewide from becoming homeless, and at the same time save tax dollars. For example, HSS would cost $11,224 per year for a household of three in New York City – a mere fraction of the $43,880 it costs annually to provide temporary shelter to a homeless family.

This fiscally and morally responsible proposal has now been endorsed by a majority of the New York City Council, who came together today to encourage Governor Cuomo to include the plan in the State budget.

“In one of the wealthiest cities in the world, it is absolutely inexcusable, intolerable, and indefensible that there are increasing numbers of children, families, and individuals who are struggling to find basic shelter,” Councilmember Barry S. Grodenchik said in a statement. “Assemblymember Hevesi’s Home Stability Support program would be a significant step forward in reversing the trend. I am happy to announce that the majority of the New York City Council backs this proposal, and I am hopeful that the Governor will consider implementing it as soon as possible.”

“I’m pleased to see the Public Advocate, Council Members Grodenchik and Levin, and the Council delegation endorse Home Stability Support,” State Assemblymember Andrew Hevesi said in a statement. “Our city has long been a leader in finding creative solutions to the greatest challenges we as a society face. The growing homeless crisis is no different. Home Stability Support has the potential to keep thousands of New Yorkers in their own homes in a way that’s both fiscally and socially-responsible. I look forward to working with my city colleagues in urging the state to include the plan in the next budget.”