How to End NYC Homelessness in Five Years 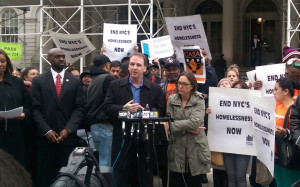 The Coalition and other members of the “Homes for Every New Yorker” partnership released a new report today that presents nine strategies that Mayor de Blasio and Governor Cuomo must implement to end mass homelessness by 2020.

The Coalition stood alongside community groups and labor unions on the steps of City Hall to unveil the report, Ending Homelessness: How Mayor de Blasio and Governor Cuomo Can Do It.

Public Advocate Letitia James was among the elected officials who attended the press conference. She echoed the report’s call for the City to allocate more NYCHA units to homeless New Yorkers, saying, “The best way to deal with homelessness to provide someone with a home. We have control over thousands and thousands of public housing units that should be going to the most vulnerable and with the most immediate housing needs.”

1. Set Aside 10% of All New City-Assisted Housing for Homeless New Yorkers

8. Raise the Minimum Wage to $15 Per Hour in New York City

9. Build Housing with Developers Who Use Local Hire Goals and Union Labor

The report has been covered by the New York Daily News, NY1, The Associated Press, Capital New York,  amNewYork, Gothamist, El Diario and others.

Read the full report, which includes the background and rationale for each strategy, here.