Even MORE Evidence of the Failures of the Advantage Program

Yesterday the New York Daily News published a comprehensive article on the failures of the Advantage program, with fresh evidence that the program is little more than a revolving door back to homelessness for vulnerable children and families. 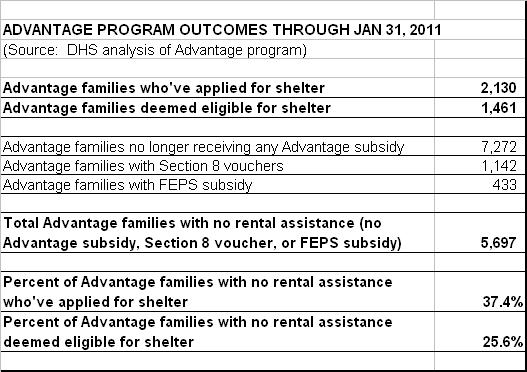 The article, written by Tina Moore, describes how many families who’ve been cut off of Advantage rental assistance under the program’s one-size-fits-all time limits have been forced to return to the municipal shelter system.

Moore tells the moving stories of families who’ve been caught in the Advantage revolving door:

Two years after finding an apartment through Mayor Bloomberg’s signature program for housing homeless families, Tracey Provencal and her daughter are back in a shelter.

“If I could have just stayed in my apartment, everything would be fine,” Provencal, 40, said through tears….

Provencal landed in a shelter about five years ago as she was dealing with an abusive boyfriend. Moving in to her Advantage apartment in the Bronx in the fall of 2008, she was excited that she and her daughter, Daisha, 7, seemed to be bouncing back.

The bathroom ceiling fell in, and she repeatedly complained of rodents, bugs and mold, but she stayed, collecting the subsidy for the full two years.

Her Advantage participation ended in August, and she struggled for six months to pay the rent. She couldn’t find a job and was evicted Feb. 9.

Today, she’s back where she started: a Bronx shelter for abused women. “This is a bad situation,” she said.

Tammy Prattis, 43, entered Advantage with her four children in September 2008. When her two years elapsed, she was unable to pay her rent without assistance.

She got an eviction notice and ended up in a lower Manhattan shelter by October. Prattis recently had a fifth child, a girl, with Down syndrome. The baby remains in the hospital.

“She’s too vulnerable to come here,” Prattis said of the shelter.

As if the hardship suffered by these and thousands of other families isn’t evidence enough of the failures of the program, the Daily News article also includes updated data showing the failures of the program. Simply put, one in four Advantage families is already back in the shelter system, and more than one in three such families has applied for shelter, as shown in the table here.

The Daily News quotes NYC Department of Homeless Services Commissioner Set Diamond saying that, “What taxpayers should judge us on is not how it goes when [the families are] receiving Advantage, but what happens when it’s over.”

Frankly, we couldn’t agree more. And overwhelmingly the evidence shows that the Advantage program is a failed experiment that should end.