Posted on September 18, 2013 by PATRICK MARKEE
The front page of today’s New York Times has a powerful article about the rising number of working New Yorkers who are homeless – the result of NYC’s worsening affordability crisis and failed Bloomberg policies.

The New York Times article by Mireya Navarro paints a finely-grained portrait of the lives of struggling working people, some of them working two or more jobs, who are nonetheless forced to reside in the NYC shelter system.

On many days, Alpha Manzueta gets off from one job at 7 a.m., only to start her second at noon. In between she goes to a place she’s called home for the last three years — a homeless shelter.

“I feel stuck,” said Ms. Manzueta, 37, who has a 2 ½-year-old daughter and who, on a recent Wednesday, looked crisp in her security guard uniform, waving traffic away from the curb at Kennedy International Airport. “You try, you try and you try and you’re getting nowhere. I’m still in the shelter.”

With New York City’s homeless population in shelters at a record high of 50,000, a growing number of New Yorkers punch out of work and then sign in to a shelter, city officials and advocates for the homeless say. More than one out of four families in shelters, 28 percent, include at least one employed adult, city figures show, and 16 percent of single adults in shelters hold jobs.

Mostly female, they are engaged in a variety of low-wage jobs as security guards, bank tellers, sales clerks, computer instructors, home health aides and office support staff members. At work they present an image of adult responsibility, while in the shelter they must obey curfews and show evidence that they are actively looking for housing and saving part of their paycheck.

The number of homeless New Yorkers who are working has risen dramatically in recent years, according to City data that Coalition for the Homeless obtained through a freedom of information request. Between November 2010 and July 2013, the number of homeless households residing each night in municipal shelters grew by 57 percent, from 3,003 to 4,700 working households. 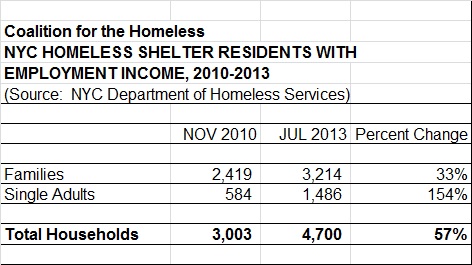 As we wrote recently, a major cause of all-time record NYC homelessness – now at 51,000 people, including more than 21,000 children, bedding down in shelters each night – is the widening gap between apartment rents and incomes. Indeed, according to Census Bureau data, during the current economic downturn median rents in NYC rose by 8.5 percent while median renter incomes fell by 6.8 percent. As Navarro’s article notes:

Advocates of affordable housing say that the employed homeless are proof of the widening gap between wages and rents — which rose in the city even during the latest recession — and, given the shortage of subsidized housing, of just how difficult it is to escape the shelter system, even for people with jobs.

“A one-bedroom in East New York or the South Bronx is still $1,000 a month,” said Patrick Markee, senior policy analyst with the Coalition for the Homeless, an advocacy and housing services group. “The jobs aren’t enough to get people out of homelessness.”

David Garza, executive director of Henry Street Settlement, which runs three family shelters and one shelter for single women with mental illnesses, said that five years ago his shelters were placing 200 families a year into permanent housing. Last year, he said, they placed 50.

“Without low-income housing, it’s a maze with no way out,” Mr. Garza said.

And as we noted in our State of the Homeless 2013 report and elsewhere, the other major factor behind record NYC homelessness is the failed policies of Mayor Bloomberg – in particular, his disastrous decision to take away permanent housing resources targeted to homeless children and families.

Sadly, the next New York City mayor will inherit an unprecedented homelessness crisis. The only good news is that there are positive, cost-effective, housing-based solutions that the next mayor can adopt to stem the tide of rising homelessness.