Although the vast majority of homeless men, women, and children in NYC sleep in shelters, the thousands of others who bed down on the streets or in the subways are a daily, visible reminder that our city is in the midst of a record homelessness crisis. This week, the City’s Department of Homeless Services announced the results of their annual Homeless Outreach Population Estimate (HOPE) survey, which estimated that 3,892 homeless people were sleeping on the streets on a single night in February 2017, up 40 percent from a year earlier. The Coalition for the Homeless has long expressed concerns with the HOPE survey’s methodology – such as its failure to include people sleeping in private vestibules or non-visible locations – and so the estimate almost certainly understates the total number of homeless New Yorkers staying on the streets. Nevertheless, the severity of the ongoing crisis is unmistakable and underscores the urgent need for permanent supportive housing to help our most vulnerable neighbors obtain the stability and dignity of a home.

Giselle Routhier, Coalition for the Homeless Policy Director, released this statement in response to the new HOPE estimate: 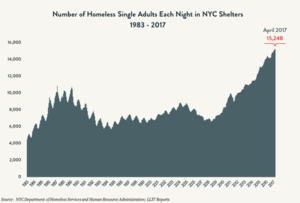 “No New Yorker will be surprised to hear that the City’s HOPE estimate shows what our eyes have been telling us for years: The number of our neighbors left with no option but to bed down on the streets has continued to surge, mirroring the sharp increase in shelter demand in recent years. The estimate is of questionable value because of its flawed methodology and undoubtedly misses many individuals who are not immediately visible to those conducting the survey. However, the implications are clear: The decline in supportive housing availability – NYC has the lowest rate of supportive housing placements since 2006 – is leaving thousands of homeless New Yorkers without permanent homes. It is incumbent upon Governor Cuomo and Mayor de Blasio to meet the unprecedented need by accelerating their respective supportive housing timetables in order to get homeless individuals off the streets and into permanent housing.”

On CBS New York, Rich Lamb reported about the need for real solutions:

As WCBS 880’s Rich Lamb reported, Giselle Routhier of the Coalition for the Homeless said it is what New Yorkers have been seeing.

“We know that there are thousands of people on the streets and what we need is solutions to match the scale of the need, so we need housing with support services for people who have mental illness, substance abuse issues,” Routhier said. “A lot of people who are living on the streets struggle with severe disabilities, so they really need that permanent supportive housing with extra services in order to get them off the streets and into housing.”

She adds the city and state need to up their games.

“Both the mayor and the governor have made commitments to supportive housing and that’s what we need now to come on as quickly as possible,” Routhier said.

In an article for Gothamist, Emma Whitford wrote about HOPE’s methodological flaws and the difficulty reaching homeless youth, and Erin Durkin of the New York Daily News wrote that the estimate is higher now than at any time since 2005.