The Young Women’s Giving Circle (YWGC) is a student-run service group facilitated by the Fresh Air Fund. Every year, the students choose an issue and spend months volunteering, studying, and fundraising around the cause of their choice. 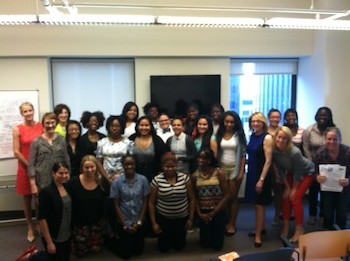 This year, the YWGC chose the issue of homelessness. I had the privilege of working with them over the past few months as they volunteered for our food program and sorted clothing for our Crisis Intervention program. They also collected thousands of signatures for the Twenty Thousand Kids Campaign, a student-driven advocacy campaign to bring awareness to child homelessness in NYC.

I spoke with them numerous times about homelessness in New York City and was impressed by their knowledge of the topic and their search for causes and solutions. They even grasped complicated policy solutions and suggestions put fourth by housing advocates.

Last month they gave their final presentation to friends and family on all that they’ve learned. They began by asking the audience about what their perceptions about homelessness were. Many in the audience suggested imagery such as alcoholism, panhandling and living in a cardboard box. The students then challenged these perceptions by telling the audience the most recent statistics on homelessness in NYC, such as the fact that there are more than 51,000 people staying in NYC shelters, 21,000 being children. The girls then compared a yearly salary on minimum wage to the total average living costs in New York City, demonstrating that it is impossible for anyone living on such a low income to afford sufficient housing or even basic nutritional requirements.

The students concluded the presentation with a slide show of their volunteer efforts and presented the Coalition for the Homeless with a check for $2,000. They had raised the funds by holding bake sales and selling candy bars and had decided that the Coalition matched the spirit of their organization. Afterwards, one of the young women reflected on the shocking facts and figures they had presented. She then encouraged the audience to remember them and to act on them rather than let them slip behind our day to day tasks.

I’m so honored that I was able to interact with such an amazing group of young women. The Coalition would like to thank them for their incredibly hard work over the past few months, and for their extremely generous gift! We truly appreciate their determination to get to the root of difficult issues and let it serve as an example that we can all make a difference in some way.