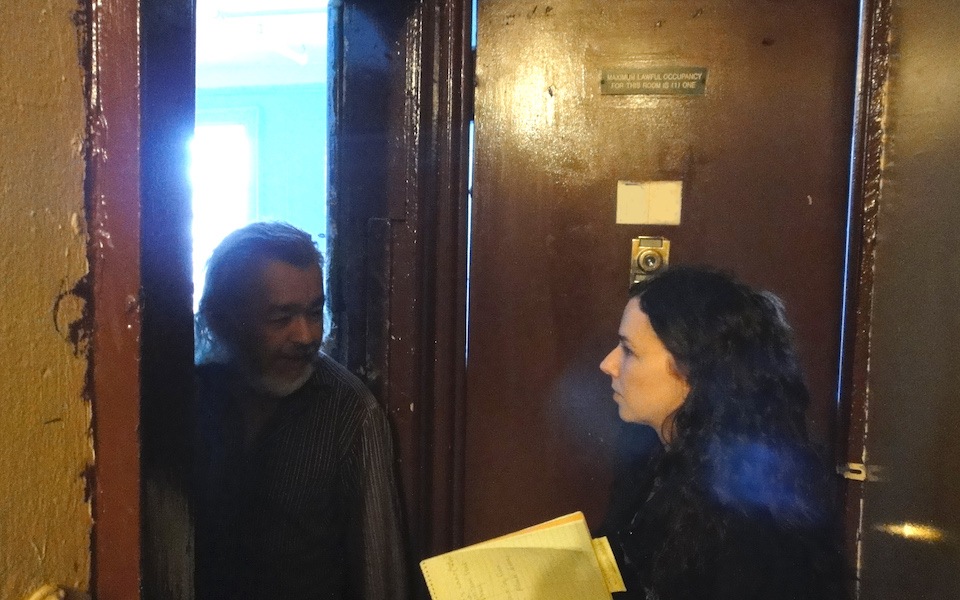 The Coalition for the Homeless is the court-appointed independent monitor of the municipal shelter system for single adults and the City-appointed monitor of shelters for families.

Since 1981, the Coalition has served as the court-appointed monitor of the New York City shelter system serving single adults, conducting both scheduled and unannounced inspections of shelters and organizing residents to identify and address problematic conditions in shelters. In January 2016, this role was greatly expanded when Mayor de Blasio – responding to scathing reports from the Department of Investigation and the Comptroller’s office – asked the Coalition to extend our oversight to include the shelter system serving homeless families.

The Coalition monitors hundreds of shelters throughout New York City. Our dedicated team of shelter monitors visit shelters during both daytime and evening hours, and they coordinate with other Coalition programs to follow up on reports we receive from shelter residents about problems at particular facilities.

The Coalition’s shelter monitors conduct formal, joint inspections of single adult and family shelters with Department of Homeless Services (DHS) staff. For each, Coalition and DHS staff conduct a thorough inspection of the building and assess compliance with relevant regulations, ensuring that common areas and individual units are clean and in good physical condition, the facility is free of rodents or vermin, and the fixtures in the bathrooms are functional. Shelter monitors ensure that conditions are abated quickly, and they re-inspect shelters to track the progress of longer-term capital repairs.

In addition to scheduled joint inspections, the Coalition also performs unannounced inspections of shelters – usually at night, when the most pressing problems related to physical conditions, social services and shelter capacity typically arise. Since shelter staff do not know when Coalition monitors may arrive, our unannounced visits yield the most valuable and actionable information. These monitoring visits also present an opportunity to speak with shelter residents about their concerns, and to refer them to relevant resources.

The Butler v. City of New York class action lawsuit was brought to ensure that people with disabilities are able to meaningfully access DHS shelters and services. Before Butler, many DHS shelters failed to fully comply with the Americans with Disabilities Act, making it difficult for homeless New Yorkers with disabilities to enter and navigate the shelter system.

An estimated 67 percent of single adult shelter residents have a disability compared with 11.2 percent of the overall NYC population. Similarly, high rates of disability exist among homeless families with minor children (51 percent) and adult families in which no minor child is present (78 percent). The very safety net meant to protect homeless individuals and families far too often fails to provide proper access for those with disabilities. Prior to the Butler settlement, far too many homeless New Yorkers with disabilities faced unlawful barriers, practices, policies, and other obstacles as well as a lack of sufficient staff training, which combined to make City shelters inaccessible for them.

The lawsuit was filed against the City in 2015 by The Legal Aid Society on behalf of homeless people with disabilities, the Coalition for the Homeless, and the Center for Independence of the Disabled in New York, and a settlement was reached in 2017. White & Case served as pro bono counsel. The landmark victory requires that the City remove barriers to shelter access, ensure that reasonable accommodations are provided, and comprehensively improve the shelter system for people with disabilities.

Get Updates on Advocacy Actions

The Coalition frequently holds and attends rallies in New York City and Albany to fight for the rights of homeless New Yorkers, as well as to advocate for the expansion of permanent, affordable housing. If you’d like to get involved, sign up for our Advocacy email list!

Formed nearly two decades ago, the Coalition for the Homeless’ Client Advisory Group (CAG)  organizes homeless and formerly homeless New Yorkers. CAG is a multifaceted mutual support and activism group that engages in advocacy, education, empowerment, and socialization. We believe that the most effective and compelling advocates for the homeless are homeless people themselves. CAG is open to people currently experiencing homelessness as well as formerly homeless individuals. Learn more.