Outraged over the plight of the more than 20,000 homeless kids residing in emergency shelter each night, a group of concerned New York City schoolchildren collected over 10,000 signatures on a petition to outgoing Mayor Bloomberg.  They delivered the petition at City Hall today, hopeful that the next Mayor will take a more rational and humane approach to ending family and child homelessness after the crisis skyrocketed during the Bloomberg years.

“This issue is personal to me.  I used to be one of the 22,000 homeless children and I don’t want to see other people go through what I went through,” said Avonna Zheng, a 12th grader at Murry Bergtraum High School for Business Careers.  “Without stability, there is no opportunity.”

“Many people take for granted that they have a warm home to live in, but 22,000 kids don’t,” said Liana Chow, a 9th grader at Stuyvesant High School.  “This is not their fault, and it is everyone’s job to help them. Hundreds of kids I know signed these petitions because we want all NYC kids to have homes, which will give them the stability they need to succeed in school.”

The petition explains that “a shelter is not a home” and urges the Mayor to “give homeless families a little help with paying rent” so that “their kids will be able to grow up in real homes instead of scary shelters, and have a chance for the same opportunities as everyone else.”

“We’re delivering this petition to Mayor Bloomberg because 10,000 school kids throughout New York City want him to know that we care about the 22,000 kids who have to sleep in a homeless shelter tonight,” said Rebecca Berke, a 12-year old at City and Country School.  “We know that the story of Dasani that was in the NY Times last week is not the only story, and hope that all these school kids who signed the petition will be heard because we think every child in NYC deserves a home.” 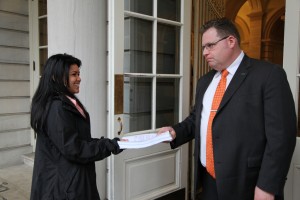 According to City data, there are now more than 52,000 homeless people residing each night in the municipal shelter system, up 69% since Bloomberg took office. This is the largest number of homeless people in NYC since the City began keeping records more than three decades ago.

This record-high shelter population includes more than 22,000 homeless children. And the number of homeless families has increased by 80% since Bloomberg took office.  The next Mayor has pledged to address this problem. 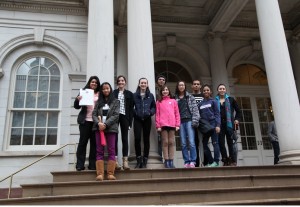