On Thursday, April 23rd, Coalition for the Homeless and The Legal Aid Society presented testimony to the New York City Council’s Committee on General Welfare regarding Intro. 1927, which would require the Department of Homeless Services (DHS) to provide all single adults in the DHS shelter system, as well as single adults experiencing homelessness who are currently unsheltered, with the option of a private room during the COVID-19 public health crisis. The virtual hearing included powerful testimony from several homeless New Yorkers, who shared their harrowing firsthand experiences of living in congregate shelters and on the streets during the COVID-19 pandemic. The Coalition’s testimony included a statement from Seamus, who has been homeless for four years and contracted COVID-19 in a non-DHS shelter. He was discharged from the hospital to an isolation facility on March 22nd then discharged to the streets from isolation on April 14th. He said:

“You know what’s funny, I was judging people about not getting tested for the virus because they were worried about losing shelter as a consequence. Now I understand their mentality. I decided to do the right thing, and now I am on the street without any resources. Yes, I was homeless before all of this, but I at least had (private) shelter. Now I lost that for doing the right thing and speaking out. Ironic, isn’t it?”

The Council legislation is intended to prevent further spread of the potentially deadly virus among homeless New Yorkers by offering all single adults in DHS congregate shelters or on the streets a private hotel room placement. The Coalition and Legal Aid support the legislation and suggested a few amendments to strengthen the bill, such as ensuring the private room option is available to all homeless New Yorkers who need one.

The testimony from the Coalition and Legal Aid also included previously unpublished calculations of the age-adjusted COVID-19 mortality rate in NYC shelters, which conveys the dire urgency with which the City must act in order to prevent more homeless New Yorkers from contracting and possibly dying from the disease:

As this crisis has progressed, the lack of access to private spaces for single adults has exacerbated COVID-19 transmission, hospitalization, and deaths among homeless people. As of April 21, the Department of Homeless Services reports that 48 homeless people have died from the virus, including three unsheltered individuals. Because of a lack of testing across the city, and particularly among low-income communities, it is very likely that more deaths during this period can be attributed to COVID-19 but are not yet reported. Even so, because the sheltered homeless population skews much younger than the general New York City population, an age-adjusted analysis indicates that there have been 16 more deaths among sheltered homeless New Yorkers than would have been expected based on the overall city mortality rate.

In consultation with Charles Cleland, PhD, a biostatistician at NYU, Coalition for the Homeless calculated the age-adjusted mortality rates among sheltered homeless New Yorkers to date.  As of April 21, the overall New York City mortality rate due to COVID-19 was 117 deaths per 100,000 people. For sheltered homeless New Yorkers, it was 184 deaths per 100,000 people – or 57 percent higher than the New York City rate. Moreover, because most homeless individuals remain crowded into congregate shelters and the City has moved fewer than 1,000 homeless people into private hotel rooms, it is very likely that the mortality rate among sheltered homeless New Yorkers will continue to grow, even as the overall New York City rate shows signs of leveling off. Although the age-adjusted rate for unsheltered homeless individuals is not yet calculable, these individuals also have high rates of serious underlying health conditions and it should be assumed that they face a similar, if not greater, risk of mortality compared with sheltered adults. 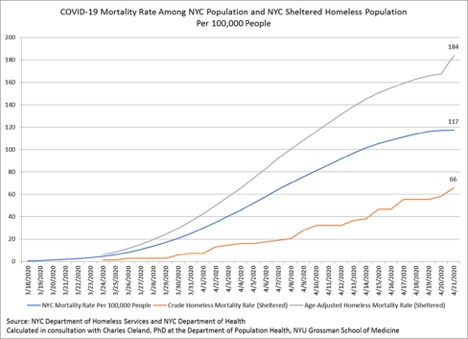 The full testimony can be read here.