New York City’s ongoing homelessness crisis impacts every one of us: From the 62,000 people languishing in homeless shelters tonight, to the thousands of vulnerable men and women desperately trying to survive on our cold streets. And from the countless households living doubled- and tripled-up in dangerously overcrowded apartments, to the hundreds of thousands of daily commuters who struggle to explain to their kids why anyone in this city should be without a home.

This City has a legal and fundamental moral obligation to provide shelter to anyone who has no other place to stay – and the system of municipal shelters is already filled to capacity. While the de Blasio administration has implemented aggressive homelessness prevention programs and unprecedented investments in long-term, housing-based solutions to try to reduce the need for temporary housing, the one-two punch of skyrocketing rents and stagnant incomes continues to push record numbers of New Yorkers into homelessness. The unfortunate result is a need for more shelters, more places where our homeless neighbors can safely lay their heads for the night and start to put their lives back together.

This is a city-wide problem, coming from and affecting every neighborhood in New York City. And our city is nothing if not famous for fostering a wide range of perspectives, ideologies and responses to crises. Some responses to the city’s need for additional shelters have garnered significant press attention, while others that decidedly merit more attention, have not.

Certain communities have served as inspiring examples of compassion and humanity by opening their hearts to those in need, by treating their homeless neighbors with respect and kindness in an otherwise dark period of their lives — by extending the very idea of “home.”

In the spirit of the season, and with a desire to lift up such examples of human kindness, the Coalition for the Homeless is announcing our first Compassionate Communities Award to be given to Catherine Barufaldi and Tracy Connor of Kensington/Windsor Terrace, Brooklyn, for their “Give Me Shelter BK” campaign.

When the close-knit community of Kensington learned in late November 2015 that the non-profit provider CAMBA would be opening a shelter for families there, many people were initially worried about the impact the new facility might have on the neighborhood. Some voiced their concerns in a spirited discussion on a neighborhood Facebook group, which inspired an idea for two longtime Kensington residents. 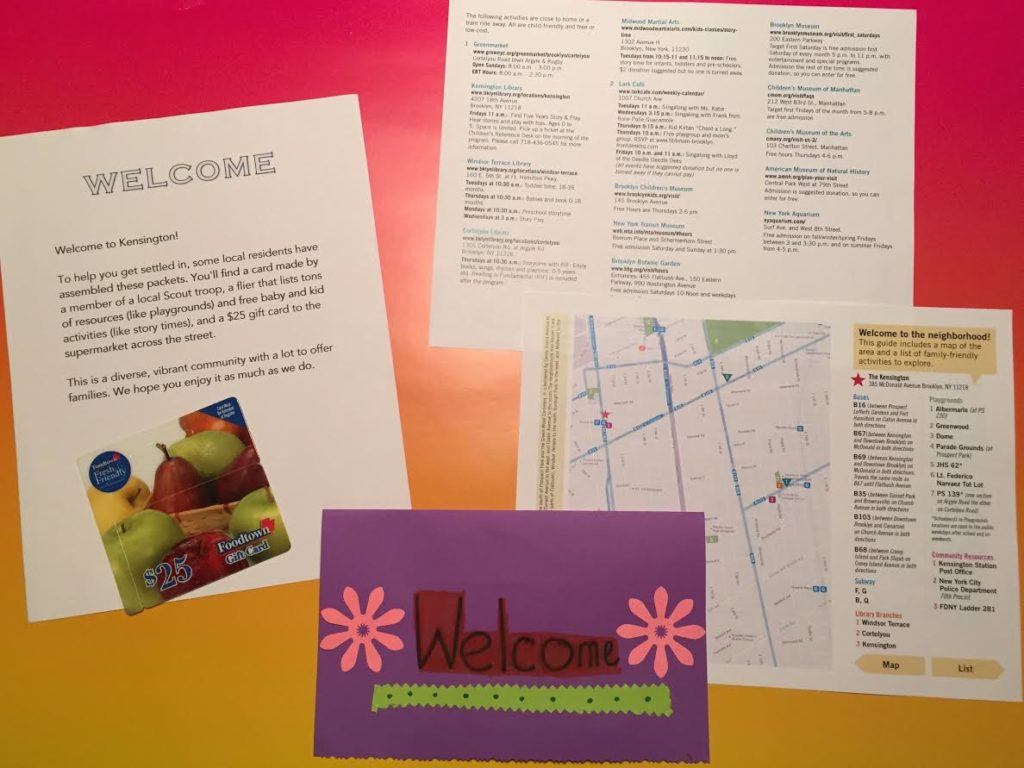 “How they are welcomed will speak volumes about each of us and our community as a whole,” Catherine Barufaldi wrote to the group. She asked her neighbors to join her in strategizing how to help these families in need.

At almost the exact same time, Tracy Connor posted a similar call to action: “I would be happy to reach out to CAMBA and inquire about what we as a community can do to welcome these struggling families and support them on their road to independence.”

The two women, previously strangers, became instant partners and were soon met with a staggering response from their eager neighbors.

“It was mind-blowing,” Tracy said of the flood of emails she received offering to help. “It was almost like someone just needed to put it out there.”

Tracy and Catherine created an email listserv and reached out to staff at the shelter, who was shocked by the early outpouring of support from the community.

“The first day we opened, there were already donations at our door,” Shelter Director Denise Lalande-Phipps recalled. 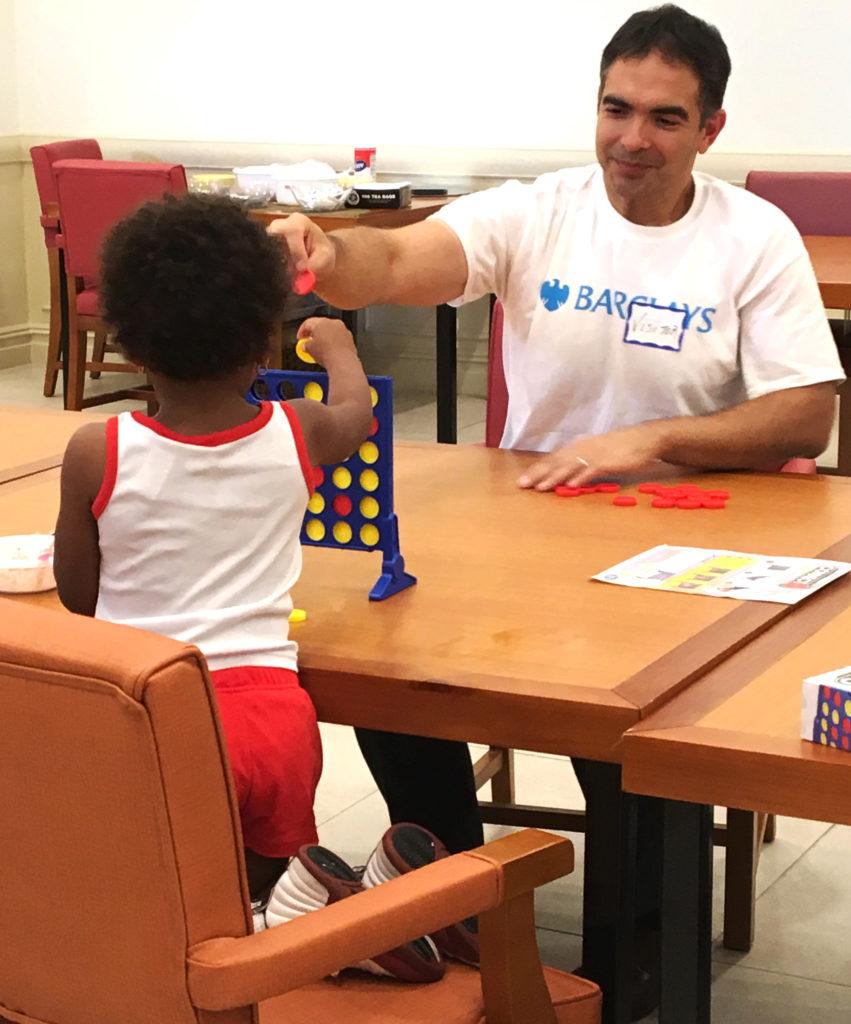 Having a blast at game night

The entire community contributed to the effort. Neighbors created a Community Advisory Board to liaise with the shelter. Boy Scout and Girl Scout troops created welcome packages for the 75 families that initially came to the shelter, including gift cards to nearby supermarkets and a guide to the neighborhood that lists free local activities for kids. There were donated toys and children’s books for the shelter’s play room and reading room, and talented volunteers stepped up with offers to teach everything from children’s horticulture classes to yoga. Countless businesses have also chipped in, helping to furnish a computer lab and hosting a game night. When the shelter staff reported that residents needed diapers, Catherine and Tracy passed along the message to their email list. Soon, entire offices of the shelter were overflowing with donated diapers.

“The response was so overwhelming that we eventually had to cut people off,” Tracy said. 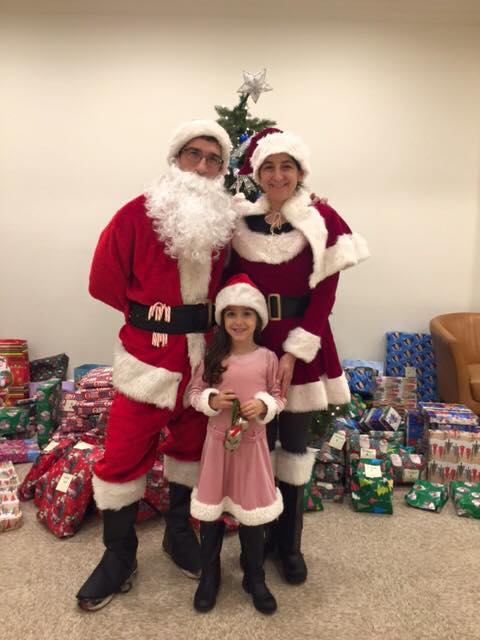 Tracy and Catherine are in frequent contact with the shelter staff and have an ongoing sign-up sheet so neighbors can purchase items needed by shelter residents, such as strollers and baby carriers. Tracy emphasized that although she and Catherine manage the email list, the rest of the Kensington community deserves credit for taking initiative.

“This is not something that takes up a lot of my time,” she said. “I’m able to delegate and just harness all of that goodwill.” 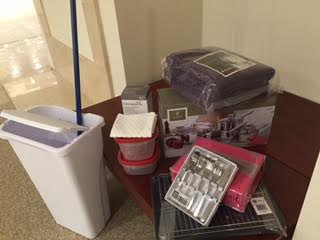 With the support of the Kensington neighborhood, the shelter has been a supportive environment for the families in need. But the kindness doesn’t end when families are finally able to move into permanent homes of their own: The neighbors use Amazon wish lists to purchase household items for the families’ new homes, creating housewarming packages with dishes, cleaning supplies, sheets and more.

“The good neighbors of Kensington – led by Catherine Barufaldi and Tracy Connor – reminded us all that compassion, fairness, and welcoming new neighbors are truly ‘New York values,’” said New York City Councilmember Brad Lander, who represents Kensington and Windsor Terrace. “No one wants a homeless shelter in his or her neighborhood. And of course, no one wants to live in one, either. But we are lucky to live in a city that provides shelter to everyone who needs it. So those of us fortunate to have a place we call home are obligated to do our fair share. The people of Kensington have shown how we can make that obligation into a blessing.”

The “Give Me Shelter BK” email list has grown to more than 400 people, who stand ready to help the shelter residents and staff at a moment’s notice. The constant communication between the shelter and the community has been key to the shelter’s success.

“We’ve demystified what a shelter is,” says Director Denise Lalande-Phipps. “At The Kensington – as we’ve always had at all CAMBA shelters – we have a Good Neighbor Policy, and we work with families to make sure they understand them. We share the policy with businesses in the neighborhood, and it includes our contact information, so they know who to call if a problem arises.”

Catherine and Tracy reflected that the opening of The Kensington shelter, which had initially worried some neighbors, has actually made the community stronger.

“The most gratifying part of this whole experience has been seeing our neighbors come together again and again during a year that has been socially and politically contentious,” Catherine said. “We all needed an opportunity to love, and The Kensington showed up right on time.”

Congratulations and gratitude to the inaugural honorees of the Coalition for the Homeless Compassionate Communities Award! The Kensington/Windsor Terrace neighbors have demonstrated the very best our communities have to offer those in need with their kind, cordial support for the homeless families in their midst. May we all learn from their example and experience. 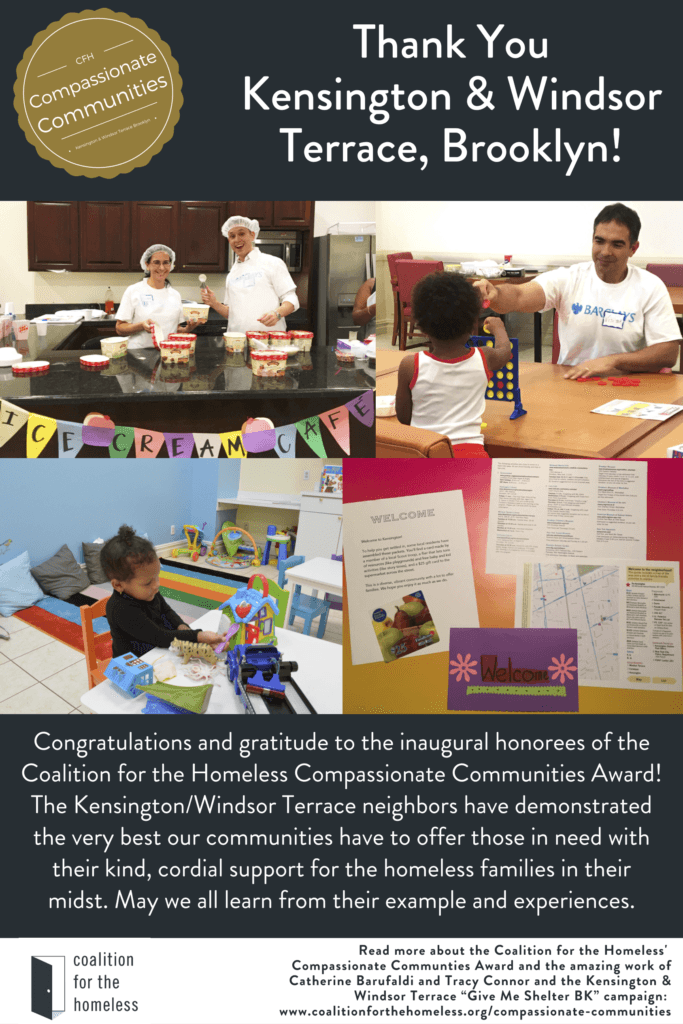