Currently 63,169 men, women, and children sleep each night in NYC homeless shelters – a new all-time high. Over the course of fiscal year 2017, a record 129,803 unique individuals spent some time in a shelter, including over 45,000 children. Homelessness in New York City is now more prevalent than at any time since the Great Depression and has hovered at unprecedented levels for the past several years. The emergency continues to be fueled by a chronic shortage of affordable housing – a result of the potent combination of rising rents, stagnating wages, and insufficient responses from all levels of government. 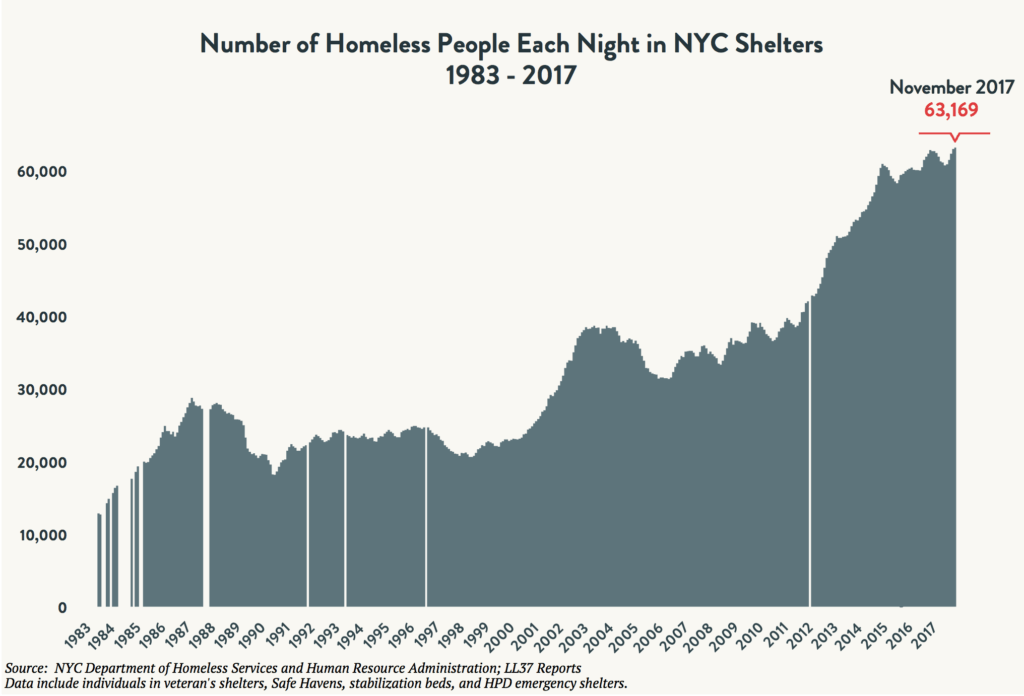 Mayor de Blasio’s record on homelessness has been mixed – and in some instances wholly inadequate, despite some notably positive steps. He has added significant new resources to prevent homelessness through a first-in-the-nation guarantee of legal assistance to low-income tenants facing eviction; created an array of new rent subsidies to prevent homelessness and to assist individuals and families moving out of shelters; increased investments in street outreach and low-threshold shelters; and committed to the creation of 15,000 units of much-needed supportive housing over the next 15 years. All of these steps are critically important, but progress in reducing record homelessness has been sluggish because the Mayor’s overall plan fails to attack the problem at its core: It does not create an adequate supply of deeply subsidized affordable housing. His Turning the Tide on Homelessness plan projects a decrease in the shelter census of just 2,500 people over the next five years. Yet, he simultaneously touts an affordable housing plan to create and preserve an unprecedented 300,000 units of housing by 2026.

These vastly mismatched goals highlight the conspicuously separate tracks the Mayor has laid for dealing with homelessness and for creating housing, when the two are intricately interconnected. The City will continue to fail to substantially reduce homelessness in New York until it funds a sufficient number of deeply subsidized affordable housing units targeted specifically to those in shelters.

To illustrate why Mayor de Blasio is projecting such a small decrease in homelessness over the next five years, we need only look at the numbers in his Housing NY plan. The Mayor has committed to creating or preserving just 10,000 units of housing for homeless households out of his 300,000-unit plan – a paltry 3.3 percent. Furthermore, only 4,000 of these units will be newly constructed and thereby available to homeless families and individuals upon completion. All but 600 of these units are already under contract and there is no plan to build any more of them in the following nine years of the plan. The remaining 6,000 units will be made available through the preservation of occupied units serving formerly homeless households or eventually turning over to serve homeless families. Only 3 percent of these units per year are vacated by current tenants and turned over for occupancy. 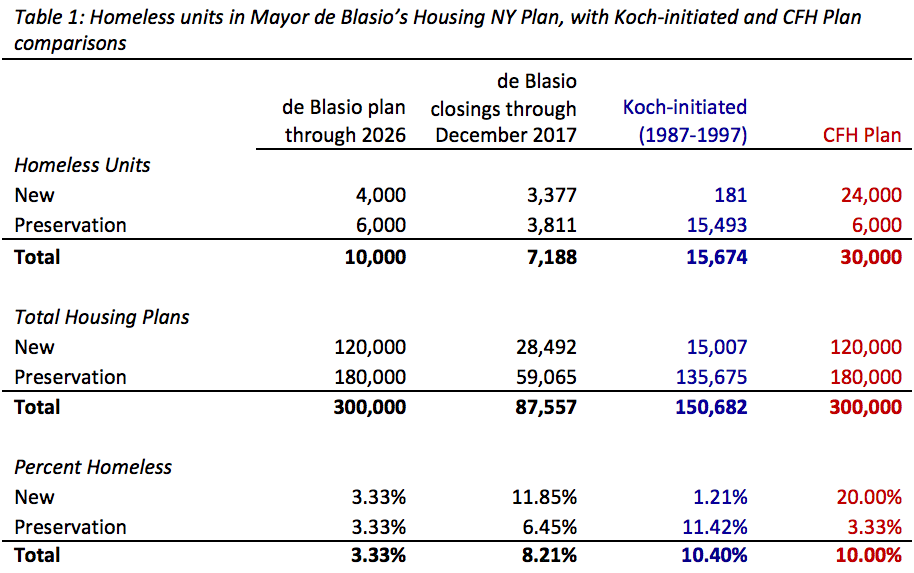 In contrast, at a time when the shelter census was only a fraction of what it is today,[i] Mayor Koch created nearly 15,700 units of homeless housing [ii] – constituting more than 10 percent of the units in his 10-year plan. Nearly all of these units were immediately available for occupancy by homeless families in shelters, contributing to the significant decreases in homelessness during this time period.[iii]

In order for Mayor de Blasio to align his housing plan with the reality of record homelessness and his own progressive values, he must immediately direct his housing development agencies to increase the total number of housing units for homeless households to 30,000 – or 10 percent of his overall plan.

Furthermore, 24,000 of these units must be new construction in order to meet the unprecedented need for permanent housing that is immediately available for occupancy upon completion by homeless families and individuals in shelters. 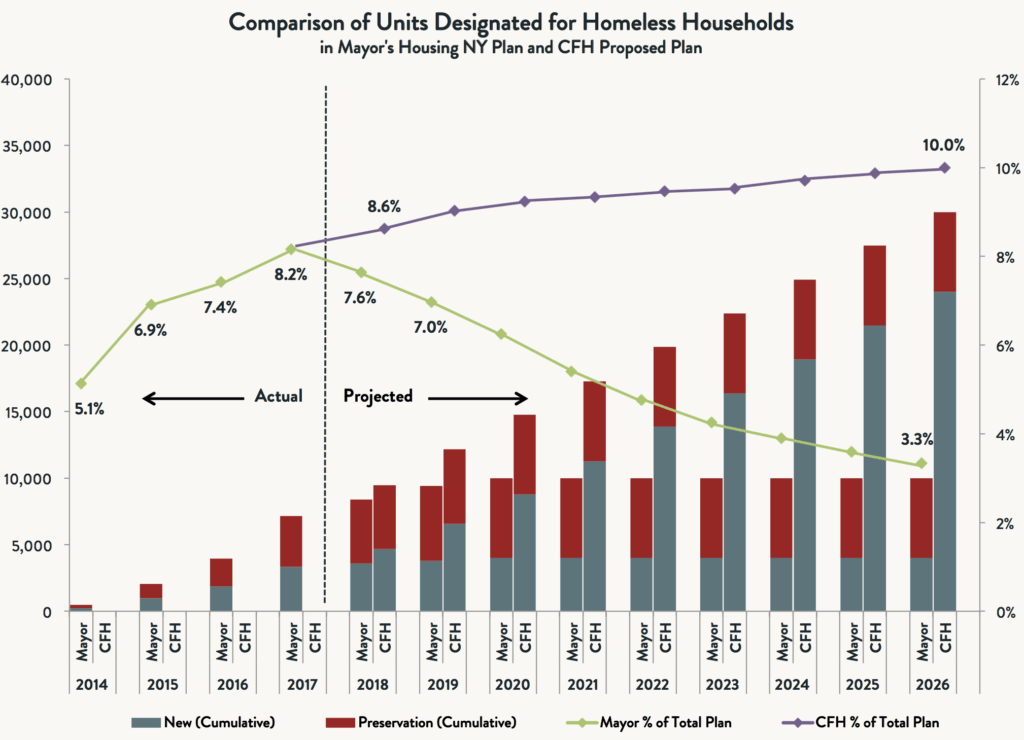 This plan will require the Mayor to build roughly 2,000 new units of homeless housing each year between now and 2026. This level of production is ambitious but feasible given the progress that has been made so far: New construction is already ahead of pace, City investment has increased to $1.3 billion per year to meet the revised goals, and term sheets specifying requirements for capital subsidies have been revised to increase incentives for units serving homeless people. Given these building blocks, homeless housing production on the scale we recommend is achievable. More importantly, it is absolutely necessary to produce a meaningful and historic reduction in modern mass homelessness. By following our recommendations, the Mayor can undoubtedly cement his legacy as a leader in progressive values and evidence-based responses to challenging social problems.


[i] When Mayor Koch launched his housing plan, there were roughly 27,000 people sleeping in shelters.

[iii]Most of Koch’s preservation units were available for immediate occupancy because they were in City-owned vacant buildings. By the time he left office in 1989, the census had dropped to less than 21,000. Through the remainder of his housing plan, the shelter census did not increase beyond 25,000 and it remained at 21,000 in 1997. Following the end of the production period for this housing plan, the shelter census began a nearly unrelenting two-decade rise that has resulted in recurring record homelessness.