NEW YORK, NY, June 1, 2022 – The Coalition for the Homeless today released Housing Affordability: The Dire Housing Crisis for Extremely Low-Income New Yorkers, an analysis of the recently released New York City Housing and Vacancy Survey (HVS), which contains evidence of the City’s dismal failure to address the catastrophic affordable housing crisis that continues to fuel mass homelessness and drive a growing number of extremely low-income households into a state of perpetual housing instability.

Inadequate housing policies since the last Housing and Vacancy Survey have reduced the available number of housing units affordable to the lowest-income New Yorkers, driving further mass homelessness while creating an excess of high-rent apartments that remain empty. An average of 48,524 people per night slept in NYC Department of Homeless Services and Department of Housing Preservation and Development shelters in March 2022, while thousands of others slept in different shelter systems or were sleeping rough on the streets, in the subway system, or in other public spaces.

Of the many disparities in the rental market documented in the survey, the number of apartments renting for under $1,500 per month (in 2021 dollars) fell from 1.6 million in the early 1990s to just under one million by 2021, while the number renting for $2,300 per month or more grew during the same period from fewer than 90,000 apartments to more than a half-million, an unsustainable trajectory.

In 2021, more than half of NYC renters (53 percent, or just under 1 million households) were rent burdened, meaning they paid more than 30 percent of their incomes toward rent, and one-third (32 percent, or just under 600,000 households) were severely rent burdened, paying more than half of their incomes for rent. Of these severely rent-burdened households, nearly 400,000 were individuals and families with incomes below $25,000 per year, 343,000 were single individuals, 233,400 were foreign-born, 186,000 included an older person, 132,000 included a person with a disability, and 115,000 included a child. 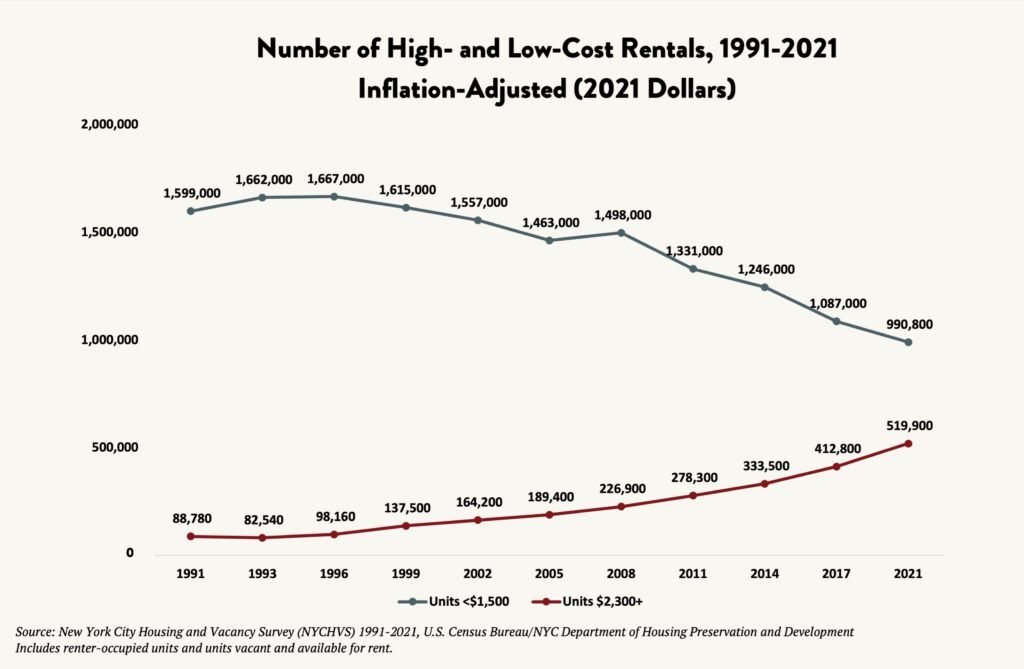 For the least expensive units, those renting for under $900 per month, the vacancy rate is an alarmingly low 0.86 percent, versus a staggering 12.64 percent rate for units renting for more than $2,300 per month. As a result of these disparities in the rental market, a disturbingly large number of NYC tenants are shouldering unsustainable rent burdens – too often, just one missed paycheck or unexpected expense away from homelessness.

“The New York City Housing and Vacancy Survey clearly demonstrates the worsening housing affordability crisis that fuels mass homelessness in our city,” said Taysha Milagros Clark, Policy and Data Analyst with the Coalition for the Homeless. “Rather than investing in affordable housing for homeless and extremely low-income New Yorkers, the de Blasio administration adopted tepid half-measures that failed to meet the scale of the need and skewed scarce capital resources toward housing development for higher-income renters. Mayor Adams needs to undo the mess of his predecessors by immediately implementing solutions that address the interconnectedness of mass homelessness and the deepening housing affordability crisis in New York City.”

Housing Affordability: The Dire Housing Crisis for Extremely Low-Income New Yorkers concludes with recommendations for Mayor Adams to address the City’s mass homelessness and housing affordability crises. As recommended in the Coalition’s State of the Homeless 2022 report, Mayor Adams must:

The full brief can be read here.