State of the Homeless 2022: New York at a Crossroads

State of the Homeless 2022: New York at a Crossroads

New Mayor and Governor Can Reverse Mistakes of the Past

NEW YORK, NY, March 22, 2022 – The Coalition for the Homeless today released its annual State of the Homeless report, New York at a Crossroads, providing a comprehensive look at the causes of – and solutions to – homelessness in New York as the city works to recover from the pandemic and the vulnerability of our unsheltered neighbors has tragically become even more clear. The recent attacks on homeless New Yorkers underscore a disturbing trend: In FY2021, a record number of New Yorkers died while homeless, amidst the City’s and State’s continued failure to address the underlying causes of the homelessness crisis. The report finds that affordable housing production has lagged population growth, leaving about a half million households with incomes below $30,000 at risk of homelessness – paying more than half of their incomes on rent. Meanwhile, an unprecedented eviction crisis looms for hundreds of thousands of New Yorkers following the expiration of the State’s eviction moratorium, in the absence of additional emergency rental assistance or expansion of needed rent subsidies.

The Coalition strongly urges Mayor Adams and Governor Hochul to cease treating unsheltered homeless individuals as a public nuisance requiring an aggressive law enforcement response – an approach not only inhumane, but ineffective – and instead embrace the solutions proven to work, including permanent supportive housing, more mental health resources, and safer, low-barrier shelters. The report notes that Mayor Adams inherited a dysfunctional and often dangerous shelter system that temporarily houses a near-record number of single adults in congregate dorms, placing residents at high risk of contracting airborne infectious diseases like COVID-19 and depriving them of the safety and dignity of more private, accessible accommodations.

“Mayor Adams is focused on getting unsheltered New Yorkers off the subways and streets, but has not yet created safer places for them to go. No one wants to sleep on the streets: They do so because the City and State have failed to offer them better options. Police sweeps haven’t worked before and won’t work this time. We must address the problems that lead so many people to decide that a sidewalk or subway car is their safest option: dorm-style shelters where people feel unsafe, a lack of mental health services, and a dearth of affordable housing. Fixing those fundamental problems is hard but urgent work. Mayor Adams and Governor Hochul have an enormous responsibility to correct the mistakes of the past, protect unsheltered individuals, and deliver affordable, accessible, and supportive housing on a scale that actually meets the need,” said Jacquelyn Simone, Policy Director with the Coalition for the Homeless.

State of the Homeless includes a report card that grades the City and State on their efforts to meet the needs of unsheltered New Yorkers, provide access to shelters and permanent housing, and prevent homelessness: 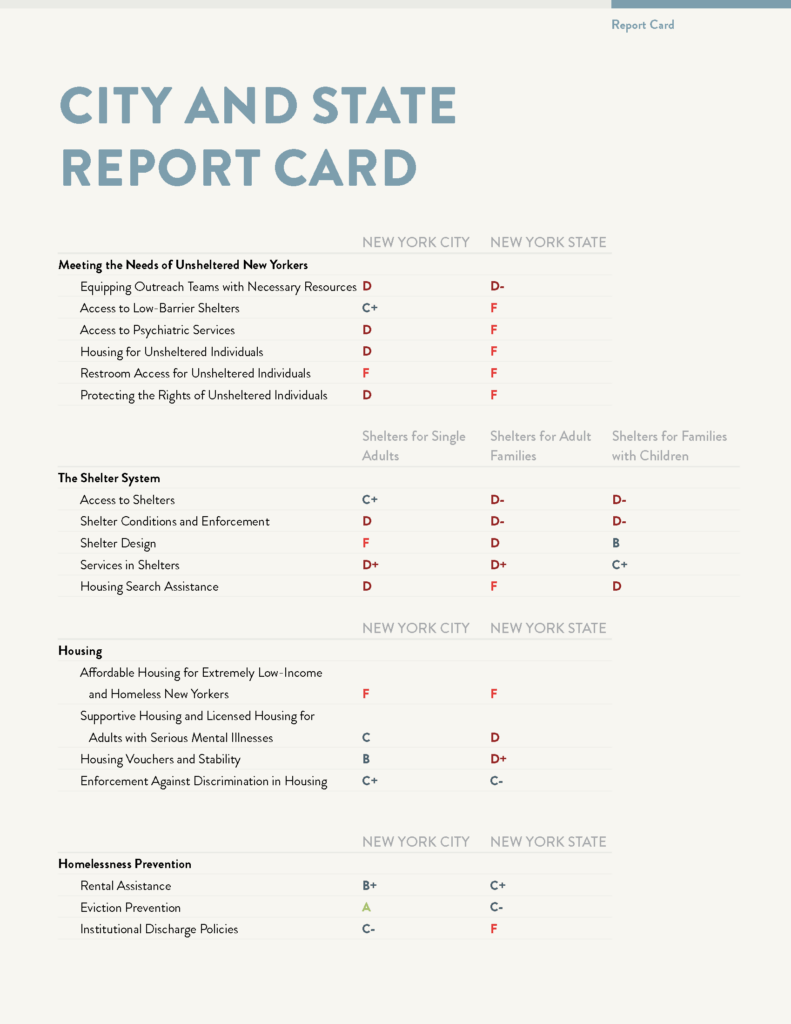 State of the Homeless also outlines key steps that the City and State can take to immediately address the growing crisis, including:

The full report can be read here: https://www.coalitionforthehomeless.org/state-of-the-homeless-2022