Today’s Read: Supporting a Right to Counsel in Housing Court

Posted on December 9, 2016 by Jacquelyn Simone

The citywide affordable housing crisis has pushed many New Yorkers to the brink of homelessness. More than half of NYC tenants pay over 30 percent of their income toward rent, just one missed paycheck or unexpected medical bill away from falling behind. If they do face eviction, most are left to navigate the intimidating housing court process without an attorney – and face their landlords who almost always have legal assistance of their own. An attorney could help tenants assert their rights, negotiate a reasonable payment schedule, and find other resources to remain stably housed. Without this assistance, housing court is often the last stop before the shelter intake center: Eviction is a leading driver of record homelessness.

The de Blasio administration has taken steps toward addressing this imbalance. Thanks to increased legal services funding, 27 percent of tenants facing an eviction were represented by a lawyer in 2015, up from a mere 1 percent in 2013. The investment has already yielded encouraging results, as residential evictions by City Marshals declined 24 percent during that period. 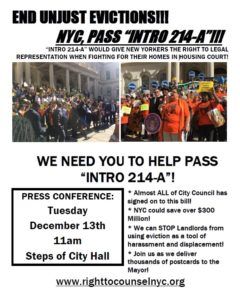 As rents continue to rise, it is imperative that the City build upon this initial success by establishing a right to counsel in housing court for all low-income New Yorkers, as proposed by Intro 214-a. In addition to leveling the playing field in housing court, a right to counsel would more than pay for itself by preserving the scarce affordable housing supply and reducing shelter expenditures, according to independent studies. The Coalition and dozens of other organizations and tenants testified in support of Intro 214-a during a hearing in September. We will continue to build momentum at a City Hall press conference at 11am this Tuesday, December 13th, when we deliver thousands of postcards to Mayor de Blasio and City Council Speaker Melissa Mark-Viverito in support of Intro 214-a. Add your name to the petition here!

Jarrett Murphy wrote in City Limits about the broad support for a right to counsel and highlighted a recent event by faith leaders calling for the passage of Intro 214-a:

Back in 2008, a slim majority of 29 New York City Councilmembers voted to extend term limits after a remarkably fast debate. Today, a bill to require that lawyers be provided to low-income people facing the loss of their homes in housing court has a far larger number of 42 Councilmembers behind it and yet, 33 months after being introduced, has yet to come up for a roll call.

If the math seems a little funny, the clergy leaders and community groups who plan to rally in support of the law Thursday evening aren’t laughing. “Every day without a right to counsel is a day with unjust evictions,” the coalition sponsoring this evening’s event said in a statement. “Faith leaders are calling on the mayor to pass Right to Counsel, as moral, civil and human rights issue.”

City Limits reported in its 2015 series on housing court on the unequal footing for tenants, operating largely without, lawyers, facing landlords in housing court.