Are “out-of-towners” driving New York City’s record homelessness crisis and “flooding” our shelters as the NY Daily News – and now Mayor Bloomberg –suggest? In a word: No.

Today’s Daily News article makes the wild claim that homeless people from other states and cities are flocking to New York City to…well, to sleep in municipal shelters:

It’s not just tourists and wanna-be starlets flocking to New York these days.

The city has also become a popular new travel destination for the homeless — and taxpayers are now paying to send them back where they came from.

Now for some context:

• The article fails to note that City data clearly shows that the vast majority (well over 90 percent) of NYC homeless shelter residents are from right here in NYC – and that their numbers have grown dramatically in recent years, driving the current all-time record homelessness levels. 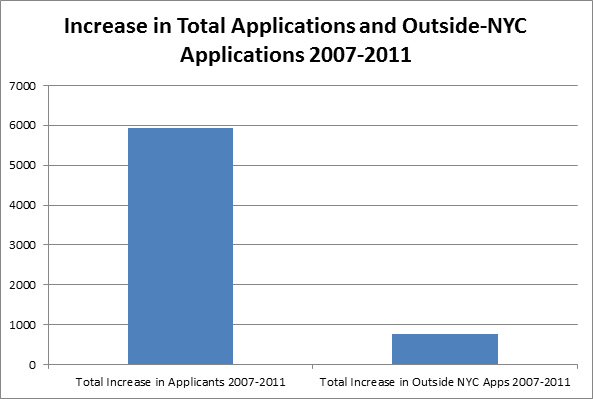 • Also, many of what City officials call “out-of-towners” are actually native New Yorkers who fell on hard times after moving out of the city – and then encountered new housing crises upon their return to their hometown.


• Finally, the City plays typically fast-and-loose with the data it shared with the Daily News – talking, for instance, about “applicants” instead of families admitted to shelter; failing to provide data for the past year; and ignoring the fact that even the number of so-called “out-of-towner” applicants fell between 2010 and 2011.

The bottom line is that the historic rise in NYC homelessness in recent years is due to the widening housing affordability gap facing New Yorkers right at home – and due to the failed policies of Mayor Bloomberg, who has eliminated all permanent housing assistance for homeless kids and families.

Sadly, Mayor Bloomberg doubled down on his administration’s absurd claims today during a press availability. The Mayor even added the ridiculous claim that reports of alleged improvements in the shelter system – something that most homeless New Yorkers would surely dispute – have somehow made their way out to the hinterlands and are attracting waves of homeless out-of-towners to NYC:

“And as you know over the years, in the last 10 years, we revamped the whole shelter system…. [T]he shelter we provide is infinitely better than it used to be, and so if you’re in hard times, people come to New York.”

It’s clear that Mayor Bloomberg still doesn’t get it – and he and his officials are still trying to avoid responsibility for the failures of their homeless policies. The number of homeless families sleeping each night in NYC shelters is at all-time record highs and is more than 50 percent higher than when the Mayor took office – and still the Mayor avoids accountability.