The number of homeless kids and families in New York City has risen even more sharply since the spring, eclipsing previous record highs. And Mayor Bloomberg still refuses to sign on to a proven plan to reduce NYC homelessness.

As we documented in our State of the Homeless 2012 report, by April New York City’s homeless shelter population had reached new all-time record highs at over 43,000 people per night. 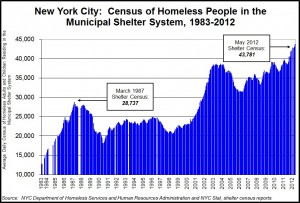 All in all, the City data show that New York City’s homelessness crisis is getting worse. But that’s just the beginning. As folks working on the front lines know, and as the New York Times reported a few years ago, the summer months typically see a seasonal surge in the number of homeless families seeking shelter:

Many New Yorkers view summer as a time for vacations, camp and lazy days at the beach. But city officials have been preparing for quite a different summer ritual: the swelling of the population of homeless families.

The reasons are varied but simple. Landlords who are reluctant to evict during winter are less hesitant when it is warmer. Parents like the Maldonados, who have endured poor housing conditions to spare their children agitation and humiliation at school, finally pack up and leave. And relatives who have taken in families in cramped apartments lose patience when children are suddenly underfoot all day long.

The Bloomberg administration has run into trouble before with its handling of the summer influx of homeless families. In 2002, there was a public relations debacle when officials allowed hundreds of parents and children to wait in the intake office each day, more than three times the number that city fire codes allowed. Other families were placed in an empty men’s jail in the Bronx that was later discovered to have been contaminated with lead paint.

Sadly, this summer’s surge has been no different. The number of families seeking shelter at the City’s Bronx intake center is up. Preliminary City data show that the number of homeless kids and families currently bedding down in the shelter system has risen significantly since May, with well over 18,000 homeless children and nearly 11,000 homeless families crowding shelters each night. Families are trapped in shelters longer and longer due to the lack of housing aid. And there seems to be no end in sight to the rise in NYC homelessness.

All of which brings us back to the question we ask ourselves every single day: Why won’t Mayor Bloomberg agree to the proven plan to restore vital Federal housing assistance to homeless kids and adults?

So, Mayor Bloomberg, what’s holding you back?