An extensive body of research clearly proves the efficacy of supportive housing in ending homelessness and saving taxpayer dollars. What isn’t clear is why Gov. Cuomo continues to impede the development of desperately needed new supportive units by letting weeks pass by without signing a memorandum of understanding (MOU) required in the budget approved in April.

Instead of signing the full MOU and releasing the $1.9 billion allocated for affordable and supportive housing in the State budget – of which $1 billion is slated for supportive housing – Gov. Cuomo and the leaders of the Senate and Assembly signed a partial MOU in the final hours of the legislative session to release a mere $150 million, which they claim will fund the first year of the Governor’s 15-year, 20,000-unit plan. However, supportive housing developers require longer-term funding commitments to leverage investment. Meanwhile, 80,000 New Yorkers statewide languish in shelters and on the street.

However, at the end of the legislative session, the governor instead announced a one-year plan to use $150 million to fund up to 1,200 units – a fraction of his initial promise. His office claimed those funds are the first year of a five-year commitment, but unfortunately even if the governor keeps his word, the five-year commitment would fund only 6,000 of the 20,000 units he announced.

This kind of year-by-year accounting reflects a lack of understanding of how supportive housing gets built. Supportive housing developers, investors and service providers need long-term funding commitments in order to plan safe, permanent housing for the most vulnerable New Yorkers. Without state-committed capital and operating subsidies, it is impossible to attract private investment for the acquisition of land and pre-development financing.

The most likely outcome of the governor’s actions is that little or no new housing will be created.

New York City and communities across New York state are struggling with a devastating crisis. Roughly 60,000 New Yorkers confront homelessness every night in our city – and that number increases to more than 80,000 statewide.

In January, faced with images of homeless New Yorkers sleeping on cold and snowy streets, Gov. Andrew Cuomo promised to build 20,000 new units of supportive housing over 15 years. But, inexplicably, he has not kept his promise, threatening long-term shelter for tens of thousands of individuals and families.

When the state Budget passed in April, it included capital funds to build the first 6,000 units over five years, but required the completion of a memorandum of understanding (MOU) between Cuomo and the leaders of the Senate and the Assembly before the funds could be spent. 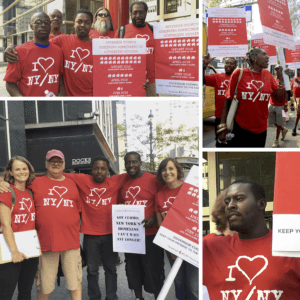 On Wednesday morning, Coalition staff and clients rallied outside Gov. Cuomo’s Manhattan office to urge him to immediately sign a full MOU and release promised funds for supportive housing. The Campaign 4 NY/NY Housing has been consistently pressuring State leaders to sign the MOU, and plans to rally outside the Governor’s office every week until the funds are released.

Supportive housing breaks the cycle of homelessness by pairing the stability of a permanent home with on-site services to support people with mental illness, addiction, HIV/AIDS, chronic illness, disability or other special needs. Research proves that supportive housing:

Governor Cuomo promised in his Jan. 13 budget address that the State would create 20,000 new supportive units. The budget approved in April set aside $1.9 billion for supportive and affordable housing, but those funds were subject to a Memorandum of Understanding (MOU) between Cuomo, Assembly Speaker Heastie and Senate Majority Leader Flanagan. By the time the legislative session ended in June, the State leaders approved a last-minute deal to release only $150 million – leaving the rest of the funds sitting unused at a time when 80,000 New Yorkers are homeless statewide.

Call on Gov. Cuomo to:

Spread the word on Twitter: @4NYNYHousing #SignTheMOU and include @NYGovCuomo