A Letter from Mary: Springing Into Fall 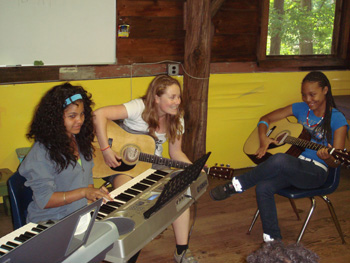 The Coalition works with homeless children in a myriad of ways. In late August, our Camp Homeward Bound said “goodbye” to the last of our sleep-away guests. Early September brought our Back to School drive, when we put together 3,000 backpacks, loaded with supplies, for homeless girls and boys heading back to school. Our summer day camp has transitioned back into an afterschool program. And, of course, our Crisis Intervention and Grand Central Food Program see thousands of children throughout the year.

Family homelessness has reached record levels in New York City. So often, when confronted with a crisis of this magnitude, it’s tempting to feel overwhelmed and shut down. After all, you might ask, “What can one person really do to make a difference?”

Visiting Camp, as always, I felt a total surge of optimism. The campers, ages 7 to 14, are funny, talented and so happy to be immersed in kid stuff: swimming, climbing, playing and learning. What difference can one person make? I’d love for you to meet Phil. It’s her third year back as a counselor and running our Music Program. While home in Amsterdam this past year, Phil, a professional musician, arranged a fundraiser for Camp and raised enough money to outfit our entire Music Center: Four keyboards, an electric piano, four electric guitars (with headphones, so the students can all practice at once), an electric drum set and stool and a dozen drum pads and sets of sticks!

But beyond just outfitting the Music Hall, Phil has inspired dozens of nascent musicians at Camp. Her love of music and of people is infectious. The last time I visited, she was sitting under a tree, outside the Music Center, with a group of the oldest boys, quietly chatting with them. She took it upon herself to begin a conflict resolution group with the boys and just watching the ease with which she led the group and how open and relaxed the boys were with her and each other really moved me.

I also met nine-year-old Bruce, who beamed one of those unforgettable smiles. He had discovered a new passion: fishing! Bruce caught a two pound trout and several other fish (all returned to the lake) – our Nature Counselor Zack helped Bruce realize this new found delight. They bonded over the quiet, assiduous energy it takes to finally hook one! 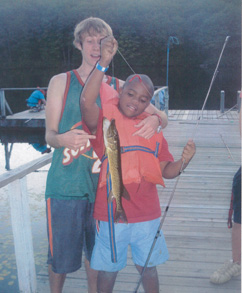 Whatever your passion is, I can pretty much guarantee that there is some way you can translate it into helping a homeless neighbor. We never would have been able to put together thousands of backpacks and supplies without our partners at the United Teachers Federation and Channel 11. Many schools, churches and synagogues, and other Coalition supporters also helped in Project: Back to School – buying an extra backpack and loading it with supplies for someone, who doesn’t have a place to call home tonight.