Coalition Celebrates its Most Successful ARTWALK Ever! 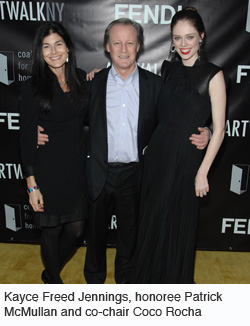 Despite a sudden Nor’easter, nearly 700 New Yorkers joined us on November 7th to honor the accomplishments of artist Jack Pierson and photographer Patrick McMullan at the Coalition’s 18th annual ARTWALK NY. 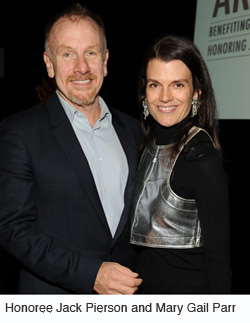 Although the storm peaked just before the start of the event, it didn’t deter our dedicated ARTWALK attendees! Several guests remarked that the severe conditions outside reminded them why everyone was there: To help the record number of New Yorkers trapped in homelessness and to raise awareness about their plight.

As guests arrived at 82 Mercer they were greeted by restaurant tasting stations hosted by Indochine, The Odeon, Michael’s, The National, Macao Trading Co., and David Burke Kitchen. A selection of wines was generously provided by Brancott Estate and specialty cocktails by the evening’s liquor sponsor, Belvedere. Guests traded stories about that night’s storm, the previous night’s presidential election and the previous week’s terrible hurricane. They then began bidding on the more than 100 stunning pieces in the silent auction. Highlights included works by Jonah Freeman and Justin Lowe, Shelter Serra, Bill Jensen and Lola Montes Schnabel; prints by Raymond Pettibon, Marcel Dzama and Pat Steir; photographs by Patrick McMullan, Patti Smith and Robert Longo, to name a few. 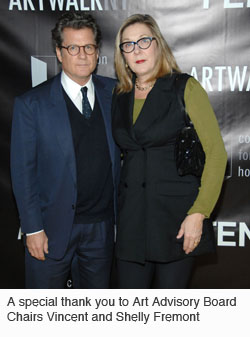 The highlight of the evening was the live auction. Guests heard special remarks from ARTWALK honorees Patrick McMullan and Jack Pierson, who spoke movingly of their admiration for the work of the Coalition and their concern and compassion for the tens of thousands of men, women and children suffering the trauma of homelessness in New York City. Their inspiring words were followed by a thrilling live auction, led by auctioneer Aileen Agopian, which featured exquisite works by Jack Pierson, Patrick McMullan, Louise Fishman, Barnaby Furnas, Wade Guyton, Jenny Holzer, Kim McCarty, Roxy Paine, Ed Ruscha, Andy Warhol and a unique commissioned portrait by photographer Adam Fuss. The live auction alone raised an astonishing $400,000 – a new record for ARTWALK!

Following the excitement of the live auction, guests returned to finalize their bids in the silent auction while DJ Donna D’Cruz kept everyone entertained through the end of the evening.

We were inspired by the hundreds of ardent Coalition supporters who overcame the brutal weather to help us raise $900,000, making this our most successful ARTWALK to date. We are truly grateful to our generous sponsors, artists, Art Advisory Board and Benefit Committee members whose amazing efforts made this year’s event possible!

The holiday spirit was in full display this season as hundreds of people responded to our annual toy drive with tremendous generosity. We received more than 2,000 toys for homeless girls and boys, from skateboards and Barbie dolls
to basketballs and MP3 players.

Dozens of companies and schools from across NYC were eager to help. AIG, Rubicon, Nickelodeon and FGI Finance held extremely successful drives, collecting hundreds of toys. Francesca, a thoughtful ten-year-old who’s already a seasoned toy-drive veteran, nearly doubled her efforts from last year and brought two truckloads of toys that she purchased with the help of friends and family. And we received nearly 300 gifts – many with warm holiday notes – from compassionate Americans across the country thanks to our new Amazon wish list that let caring folks everywhere easily participate in the drive. 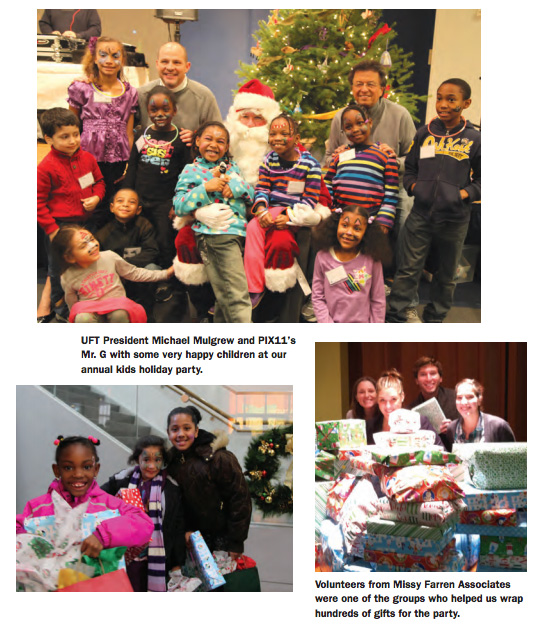 With the toys coming in, the holiday season became a flurry of activity as volunteers from Missy Farren Associates, Global Strategy Group, AIG, Curtis Brown Ltd, and UHY-US wrapped hundreds of the gifts for our annual holiday party in mid-December.

The party was a truly wonderful day – made possible by the kindness of the United Federation of Teachers (UFT). For one afternoon, 130 homeless girls and boys escaped the dreary life in a shelter for fun, music, games and great food. Our DJ got even the shiest kids moving on the dance floor, while face-painters turned our young guests into lions, butterflies and superheroes. Volunteers from Camp Homeward Bound entertained the kids with games and crafts, and artists from Xmental Inc. created personalized graffiti art for each child. The arrival of Santa brought squeals of delight as each child had a chance to sit on his lap and whisper holiday wishes in his ear. At the end of the party, PIX 11 weatherman Mr. G, UFT President Michael Mulgrew and other Coalition supporters pitched in to hand out the toys and other gifts to all the happy partygoers. Each child left with a glowing face – a reminder of the magic that the holidays can bring to us all.

The remaining toys were delivered to homeless girls and boys in nearly a dozen other shelters by our Grand Central Food Program and Scattered Site Housing Program staff, so that hundreds more youngsters would have a bit of holiday cheer, even amidst their hardships.

As we enter the New Year at a time of record child homelessness, we are deeply thankful to each of you who took the time to brighten a homeless girl or boy’s holiday this season.

Law Firms and Corporations Kick Off the GCFP Sponsorship Initiative

As 2012 came to a close, homelessness in New York City continued to soar to record levels. The number of people sleeping in emergency shelter each night has reached a staggering 50,000 – more than 20,000 of them children – and the effects of Hurricane Sandy have left countless more of our neighbors homeless, hungry and in desperate need of help.

Record homelessness and the disastrous effects of Sandy come at the same time that many other service providers in NYC have eliminated programs or closed altogether due to economic hardship, creating a tremendous surge in need.

To help our critical frontline services meet the unprecedented demand, the Coalition has increased efforts to engage the private sector for help. In October we launched a new Corporate and Law Firm Sponsorship Campaign – an innovative collaboration with New York companies and firms to support the Grand Central Food Program (GCFP). For nearly 30 years GCFP has been delivering life-saving meals to nearly 1,000 homeless and hungry men, women and children on the streets of New York City each night. 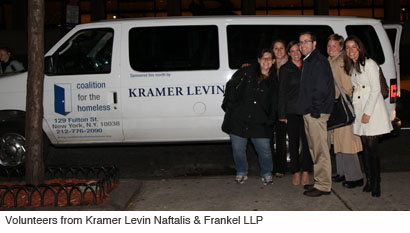 This new campaign gives NYC law firms and corporations the opportunity to sponsor a GCFP van for $10,000 per month, delivering 10,000 hot, nutritious meals to those most in need. The name and logo of each sponsor appear
on the van for that month, and the Coalition gratefully and publicly acknowledges the sponsor’s generosity on its website and in social media.

The campaign kicked off with sponsorships from Kramer Levin Naftalis & Frankel LLP, Lane Office, Troutman Sanders LLP and Proskauer Rose LLP. In addition to providing invaluable financial support, sponsoring groups send volunteers to help GCFP distribute the hot and healthy meals at 31 street sites throughout Manhattan and the Bronx. “These new volunteers have been a wonderful addition to the program,” said Juan De La Cruz, GCFP director. “They tell me again and again how they get more out of their experience than they ever imagined.” 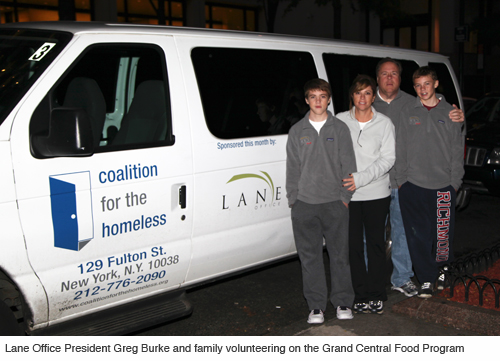 “We are honored to be one of the first corporate sponsors of the Grand Central Food Program,” said Gregory Burke, President of Lane Office. “It’s extremely rewarding for everyone in our company to be involved in this.”

It’s been truly inspiring to see New York’s legal and corporate communities respond to the crisis by stepping up to help us continue this critical program, and we look forward to working with many more sponsors in the future.

If your company or law firm is interested in learning more about becoming a GCFP sponsor, please contact us at pbayley@CFTHomeless.org.

Go Back to Newsletter