Home  Newsletter Article  What Camp Means to Me

What Camp Means to Me 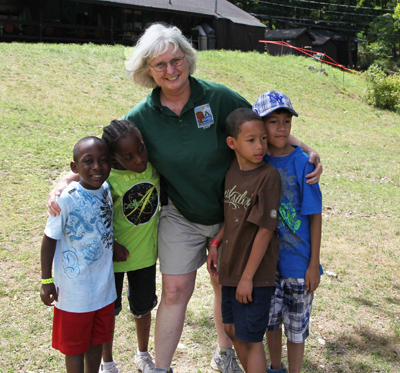 I have to admit, even after almost 40 years of being a camp counselor and director, I still get giddy with the excitement of a new season at camp. First the Camp Homeward Bound (CHB) counselors and staff arrive to begin setting up and training. Then the big opening day when the kids arrive, some with wide eyes at the spectacle of the great outdoors. Others are returning for the second, third or fourth time with welcoming arms.

The trees. The air. The hugs. The smiles. It’s magical.

Looking back on my first experience at summer camp, I was a nervous and withdrawn 12-year-old. But my counselors and fellow campers pushed me to take the lead, and I left with a sense of confidence I’d never known before.

I returned to camp every summer until I went off to college to become a teacher. But by my junior year I realized how much I missed the outdoors and kids and decided to spend the summer as a counselor at a nearby camp. I thought it would be only for a few years, while I finished up my degree. But thirty years later I was still working – now year-round – at that camp, giving thousands of disadvantaged children that same sense of self-confidence I got as a kid.

I actually tried to retire from my post as a camp director to pursue a new career, but it didn’t last.

In 2007, I was volunteering in Africa when the Coalition reached out to me for their camp in upstate NY serving homeless and formerly homeless kids. After just one summer here at Camp Homeward Bound, I knew this was where I belonged. My decades as a camp director really allowed me to hone my skills, and at CHB I get to use those skills to provide the best experience for our kids. We’ve expanded the activities and programs, recruited a corps of dedicated counselors – many of whom have come back year after year – and updated our approach and techniques we use to teach the campers important life skills.

CHB provides a steady stream of programing from when campers wake up until they go to sleep. During the day, we allow kids to choose two to three activities, from arts and crafts, cooking and nutrition, to nature, sports, music, dance, video production, photography, biking or computers. Everything except swimming, because they do that every day. Giving our campers a choice is a new approach and it has been incredibly successful. For many homeless children, life outside of camp is chaotic and largely out of their control. We’ve found that by allowing them to choose – as simple as that might seem – the girls and boys feel empowered and begin to understand the importance of owning the decisions they make.

The evening brings a different set of events and activities, like Camp Olympics, Halloween, Pirate Night, talent shows and more. The counselors who run these activities are so creative and enthusiastic and able to get all of the kids involved. 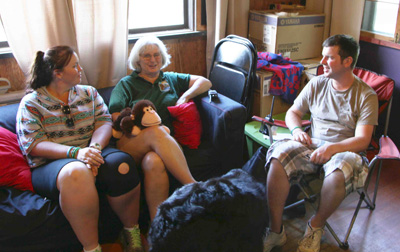 As you can imagine, being the Camp Director at CHB can get a little intense. As with all camps that serve at-risk populations, many kids come here with behavioral and emotional issues. You can actually feel their tension and stress when they get off the bus the first day. As if the stress of not having a home wasn’t bad enough, many of them come from domestic violence situations and have created a hardened shell as it’s the only way they know how to protect themselves. Our job is to gently crack that shell, get them to open up, shed their defenses and more importantly have a good time.

That’s why CHB has such a high staff-to-camper ratio. With nearly one staff member to every two kids, our counselors are able to give their time to each child so when problems arise they can show them that they care and teach them invaluable behavior management skills. Our philosophy isn’t just to address problematic behavior by telling them not to do it again or else. We strive to show each child that his or her actions have consequences, and that he or she can make good choices, which will lead to happier outcomes.

Last summer we had an 8-year-old boy, Jake. When he came to camp, he literally told me, “I’ve seen more than a boy my age should see.” Jake was so closed down and angry those first days that he required a lot of counselor attention. But by the talent show on the last day of camp, there was Jake on the stage, singing and dancing to a goofy song – just being a kid without a care in the world.

You can’t change these kids’ lives completely. I can’t take back the years of abuse or the instability or the shame they have felt. But at camp, we do give these girls and boys a bit of peace, respite and some skills to go back and better cope with their situation.

I’ve been lucky to spend most of my life at camp. I’ve seen the transformation in countless kids like Jake. I’ve had campers grow into counselors and then go on to run their own youth programs. I’ve had counselors who’ve seen the impact they can make in a child’s life wind up changing careers. I’ve seen life-long friendships form and gotten thousands upon thousands of hugs and “Thank you’s.”

So what is camp to me? I guess you could say camp is me. It’s my identity now. When I was younger, people would always ask me, “When are you going to get a real job?” The truth is, in some way they are right. This isn’t a job. It’s my life.