The combination of skyrocketing rents and stagnant incomes continues to push record numbers of New Yorkers into homelessness, leaving them with nowhere to turn but a shelter system that is bursting at the seams. New York City has a legal and fundamental moral obligation to provide shelter to anyone who has no other place to stay, which is why we don’t have the massive tent encampments found in other major cities. Opening these necessary shelters, however, can elicit a range of responses from people who live nearby. The Coalition for the Homeless continues to call on the City to commit more resources to permanent housing, which will reduce the need for shelters, but it is imperative that the City have sufficient shelter capacity for the men, women, and children who need it right away.

When Mayor de Blasio unveiled “Turning the Tide on Homelessness” in February 2017, he announced a plan for the City to open 90 new shelters to replace expensive and inadequate models like cluster-site facilities and commercial hotels. The Mayor explained that homeless people come from every neighborhood in the city, and they can get back on their feet more quickly if they are sheltered close to their existing community ties like schools, jobs, social supports, doctors, and churches.

Many people immediately latched onto the number 90 and speculated about which neighborhoods would see the opening of new shelters. Word of the first shelters drew vociferous protests and legal actions in an effort to stop the new facilities from opening. Reading the headlines or watching the local news, it’s easy to think that all New Yorkers have an instinctive aversion to homeless shelters. But although they might not be as loud and publicized as the protesters, there are many New Yorkers who instead react to the news of a homeless shelter opening in their community not with knee-jerk resistance and hyperbolic alarmism, but with understanding and rationality. They are motivated by a genuine desire to help those who are experiencing the trauma of homelessness, and open their arms to those in need. These compassionate communities recognize that no one wants to be homeless, and that the kindness of fellow New Yorkers can make all the difference to families and individuals desperately trying to piece their lives back together.

In the spirit of the season, and with a desire to bring well-deserved attention to inspiring examples of human kindness, the Coalition for the Homeless is proud to announce the recipients of our second annual Compassionate Communities Award: Lester Lin and the City Mission volunteers in Elmhurst, Queens. 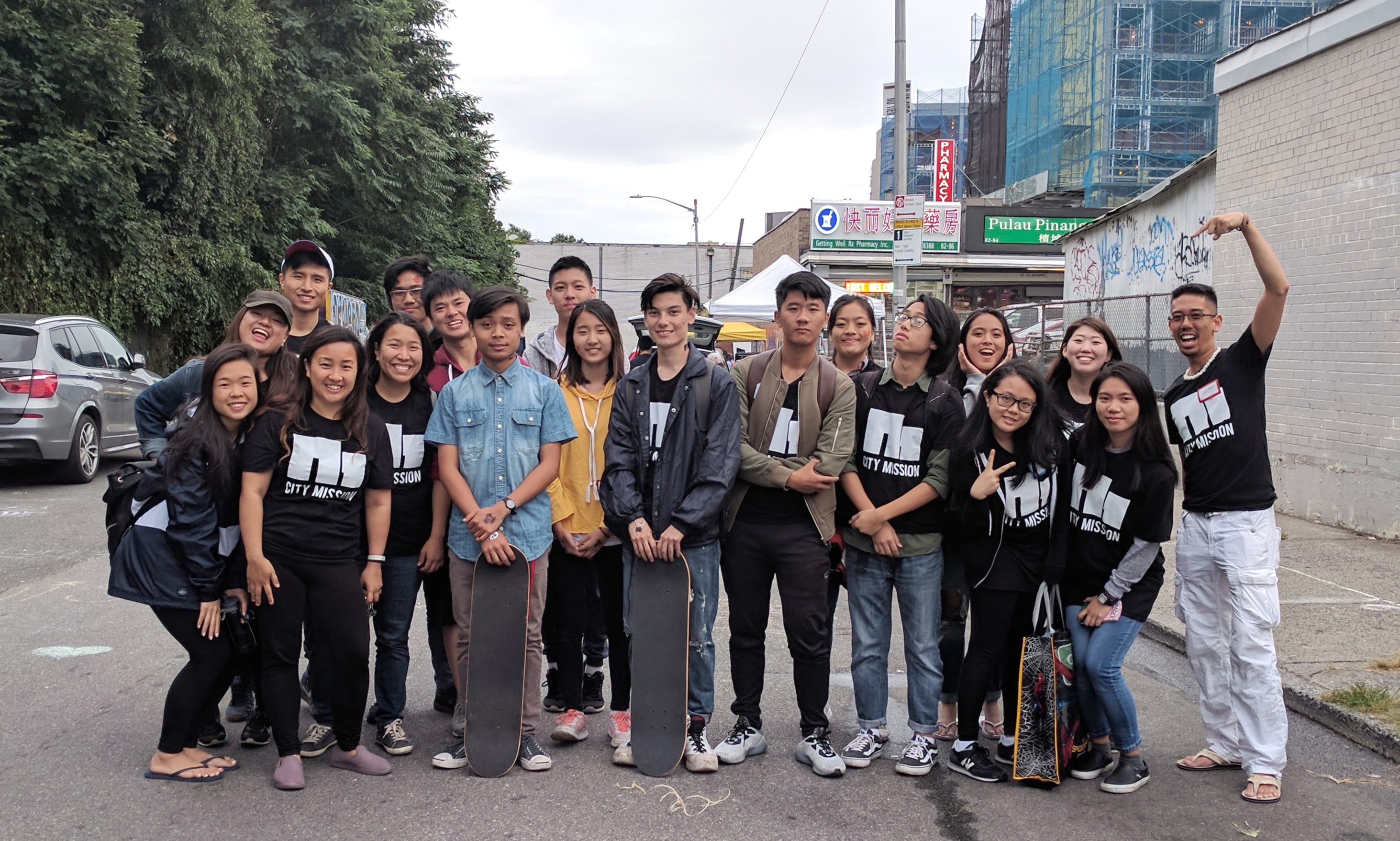 When the City announced in 2014 that the former Pan Am Hotel was going to be turned into The Boulevard Family Shelter for homeless men, women, and children, many members of the surrounding neighborhood of Elmhurst, Queens, took to the streets in protest.

The boisterous demonstrations garnered significant media attention. News of the controversy traveled all the way to Baltimore, where Elmhurst resident Lester Lin was on a business trip. Lester was outraged – not at the opening of a shelter, but at his neighbors’ reactions. He wanted to take action to welcome the homeless families who would be coming to the new shelter.

“Times are tough,” Lester said. “Most people end up in shelters not because they choose to, but because life happened. We are all a paycheck away from being homeless.”

Lester cared deeply about the Elmhurst community and knew that many of his neighbors did not share the protesters’ opinions. Lester’s family had come to Elmhurst from Taiwan when he was a baby. After attending school in Fresh Meadows, he was eager to move back to Elmhurst in 2014. He quickly became very involved in the community, and met many active neighbors during community board meetings and through his work as a youth minister at a local church.

When he heard about the protests against The Boulevard shelter, he used his community ties to mobilize his neighbors to welcome the homeless families. He contacted local churches asking for help, and he received enthusiastic responses. “Advocating for the voiceless was really what got them excited,” he recalled.

Impressively, more than 50 volunteers showed up on July 26, 2014 to host a welcome barbecue for the shelter residents.

Although some Elmhurst residents continued to resist the shelter, Lester said that “so many more came out to support us – through gifts, and time, and efforts. Young people were dominating the programs and bringing their friends from the community. I loved it!” 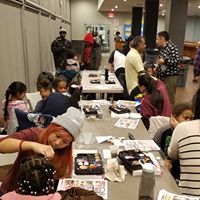 That was the first step in creating what has flourished into a strong partnership between the Elmhurst community and The Boulevard shelter. The volunteer base has grown to around 200 community members, including many young people and families. In August 2015, Lester formed a non-profit organization, City Mission, to coordinate the many initiatives.

“When we first started, we made sure that our focus was to build relationships,” Lester explained. The volunteers quickly became a regular presence at the shelter through monthly programs, reading time, choreography sessions, arts and crafts, picture day, and holiday parties. City Mission volunteers coordinated several back-to-school and toy drives to the delight of the men, women, and children in the shelter. They would distribute gifts like board games to the families so that the parents and kids could have something fun to do together.

Every Thursday night, a crew of City Mission volunteers run a Care Group that includes homework help, arts and crafts, and a chance to build friendships between the families and community members. Local students have been particularly active in helping the shelter.

“Once we present the issues to the students, we then give them an outlet to act upon helping those who are marginalized, which is to make care packages,” Lester said. “Those have been particularly empowering to see younger people getting involved.” 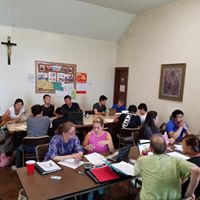 City Mission volunteers teaching a resume workshop at The Boulevard.

City Mission volunteers are constantly thinking of new ways to help the families at The Boulevard, including creating a computer coding class for shelter residents who want to learn a valuable new skill that could give them a boost in the job market.

Carlos Allende, the Program Director of the Samaritan Daytop Village-run shelter, has witnessed the volunteers’ impact firsthand: “Amidst the opposition to the opening of The Boulevard Family Transitional Residence in Elmhurst, Lester Lin reached out to his friends, his neighbors, and local churches, urging them to welcome the homeless families – people in need of help – to their neighborhood. Lester did more than just offer a welcome. Lester started a movement. Three years later, through his non-profit City Mission, 200 local volunteers assist Boulevard’s residents through monthly programs, reading time, choreography sessions, arts and crafts, picture day, back-to-school drives, and holiday parties. Singlehandedly, Lester transformed neighborhood concerns over sheltering homeless families into a mission of community engagement and an extraordinary example of community kindness, advocacy, and humanity.”

“Congratulations to Lester Lin and City Mission on receiving the Coalition for the Homeless’ Compassionate Communities Award,” said NYC Council Member Daniel Dromm (D-Jackson Heights, Elmhurst). “It has been a pleasure to work with Lester to serve Queens families in need. Lester knows that homelessness can happen to anyone. Most of us are only a paycheck or two away from housing insecurity or worse. When the Pan American Hotel was converted into The Boulevard Family Residence three years ago, some took to the streets in protest. Lester and City Mission, however, were motivated to serve their neighbors who were down on their luck. Lester’s work with City Mission is inspiring and serves as an example for all. They are truly deserving of this recognition.”

Lester said the volunteers are committed to supporting the shelter residents for as long as homeless families are staying at The Boulevard: “As long as they are here, we want to show compassion and help them through their times of struggle. … We all need some grace and compassion.” 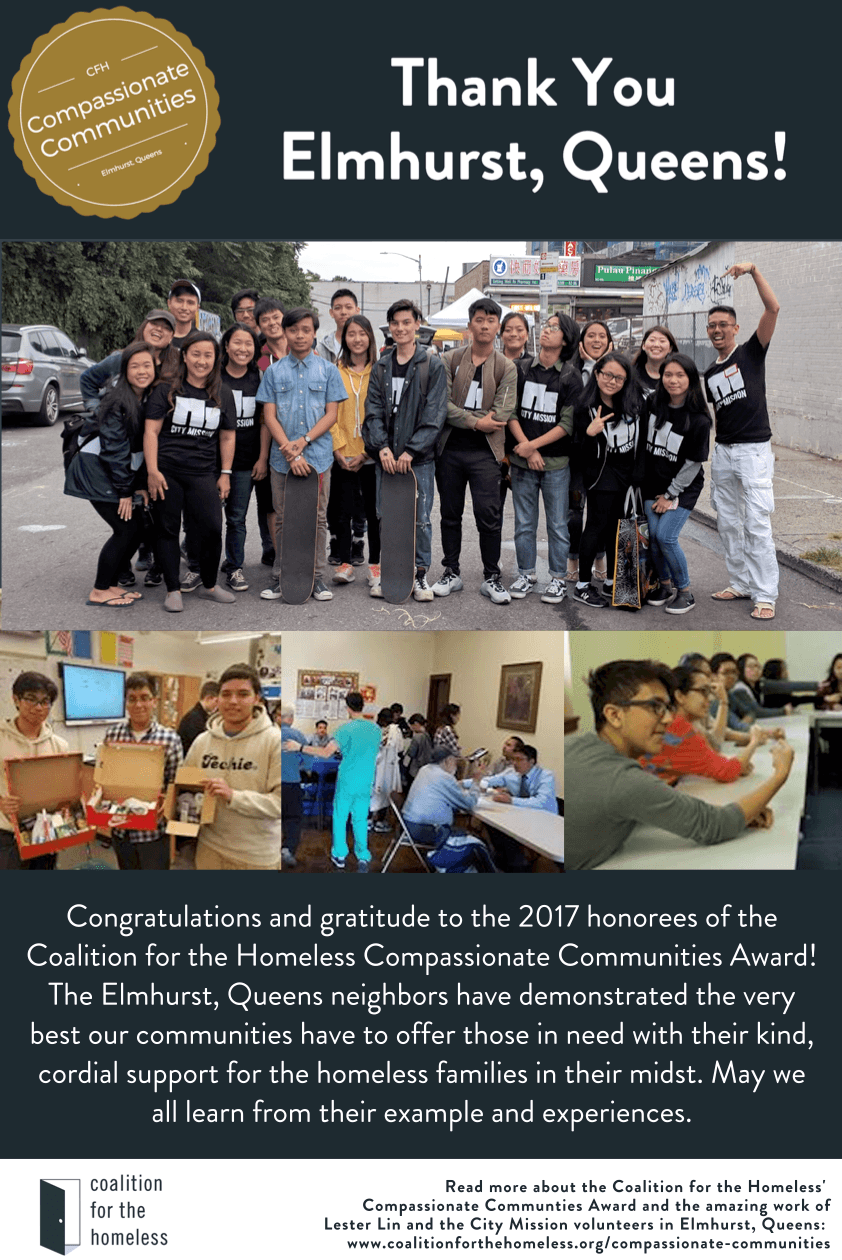