Mayor Bill de Blasio signed legislation passed by the New York City Council on July 24th that will help tenants with disabilities stay in their homes under the Disability Rent Increase Exemption program (DRIE) by freezing their rents at their current levels, as long as that level is at least one-third of their monthly income. 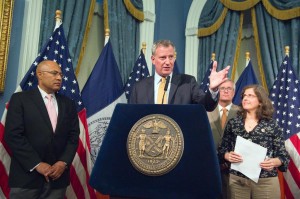 The bill is a companion to legislation signed into law on July 22nd by Governor Andrew Cuomo authorizing New York City and other localities to raise the income cap for DRIE to $50,000 per year. The new cap, well above the current caps of $20,412 for a household of one and $29,484 for households of more than one, means that families with higher incomes — such as those with more than one person with a disability, or veterans with 100 percent disability ratings – are now eligible for the protective rent freeze.

The higher income cap for DRIE eligibility is similar to the new cap for tenants over the age of 62, who are covered under the Senior Citizen Rent Increase Exemption (SCRIE) program.

At a time of record homelessness in NYC, helping people stay in their homes is inarguably one of the most cost-effective and humane solutions we have available. Sensible expansions in DRIE and SCRIE eligibility allow elderly or disabled New Yorkers avoid homelessness or institutionalization in the stability and dignity of their own homes.

The Coalition for the Homeless is grateful to all of the elected leaders who helped make this legislation a reality. Eligible families are already preparing their applications, and so the effective of the DRIE expansion will be felt immediately in our city. Read Mayor de Blasio’s news release here.