There is overwhelming evidence and research to prove that targeting housing subsidies to homeless New Yorkers does NOT lead to a surge in families seeking shelter. Instead, housing subsidies successfully reduce homelessness among children and families.

Some years ago Nobel-prize winning economist Paul Krugman coined the helpful term “zombie lies” to refer to long-disproven assertions about public policy that are still espoused by right-wing pundits and ideologues, and occasionally by otherwise well-meaning policymakers and news reporters. Examples include the notion that government austerity creates economic growth in a depressed economy – a “zombie lie” whose persistence among Congressional leaders and pundits is still causing hardship nationwide.

In the area of homeless policy in New York City, there is no more persistent “zombie lie” than the notion that providing housing subsidies – in particular, priority referrals for federal housing programs like public housing or Section 8 vouchers – leads to a surge in families entering the homeless shelter system. As noted below, this “zombie lie” was long espoused by Bloomberg administration officials to defend their elimination of housing aid for homeless children and families.

Most recently, in a WNYC News report, Howard Husock of the right-wing Manhattan Institute was quoted espousing this “zombie lie”:

Mayor de Blasio said he’s working with Governor Cuomo to reinstate a subsidy of that kind. He also plans to bring back priority referrals for public housing and Section 8 vouchers….

[A]nother reason the administration decided to eliminate them was to disincentivize people from entering the shelter system to get rental subsidies or avoid long wait lists for public housing apartments.

Some experts, like Howard Husock, the vice president for policy research at the Manhattan Institute, still worry that bringing back those policies could have that effect.

“There was a reason that the previous administration thought there was reason for concern,” he said. “We have to be careful that we’re not going to create incentives for some to try to in effect jump the line.”

The problem with this myth of “incentives” or “inducement” is twofold: (1) There is overwhelming evidence and research to disprove the notion that housing subsidies cause a surge of families seeking shelter; and (2) none of the so-called “experts” or government officials who espouse the myth have ever produced any empirical evidence to support it.

Let’s review the historical record and the research findings:

From FY 1990 through FY 2005, the City helped more than 53,000 homeless families – including more than 100,000 children – move to long-term, permanent housing using these Federal housing programs. Over the same period, an additional 11,000 homeless families with more than 20,000 children moved from shelters to City-subsidized apartments – many of them apartments created under the late Mayor Ed Koch’s acclaimed “Housing New York” ten-year plan.

In the early 1990s the Dinkins administration briefly experimented with a program called “Alternative Pathways,” which re-directed some Section 8 vouchers away from homeless families and instead towards non-homeless low-income families. The result, predictably, was a rise in the homeless family shelter census caused by the fact that families in shelter had no housing subsidies to help them leave the shelter system (made worse by the impact of the early 1990s economic recession). Ultimately the Dinkins administration abandoned the flawed “Alternative Pathways” program.

O’Flaherty and Cragg closely examined the claim that the availability of federal housing assistance – in particular, Section 8 vouchers – for families in shelter had increased the family shelter population. Their analysis found that, while the availability of housing subsidies does have some minor impact on attracting families to the shelter system, this effect is far outweighed by the large and positive impact of moving families from shelters to permanent housing. They summarized their findings in this way:

“We test the conventional wisdom and reject it. Better prospects of subsidized housing increase flows into the shelter system, but this incentive effect is not nearly large enough to offset the first order accounting effect – taking families out of the shelters reduces the number of families in them.” [Emphasis added.]

In the late 1990s and early 2000s, the City moved fewer homeless families from shelters with NYCHA public housing apartments and Section 8 vouchers, largely due to mismanagement by the Giuliani administration. The result was another sharp rise in the homeless family shelter census, which was exacerbated by the 2000-2001 economic recession.

Brendan O’Flaherty and a Columbia University colleague, Ting Wu, analyzed this period in a 2006 study entitled “Fewer Subsidized Exits and a Recession: How New York City’s Family Homeless Shelter Population Became Immense” (available here).  Again they found that the availability of housing subsidies did NOT cause a surge of families entering the shelter system; in fact, it was the reduction in housing subsidies that caused the family shelter census to grow. Here are their key findings:

“Placements into subsidized housing do not seem to lure large numbers of families into the shelter system…. The city now devotes enormous resources to determining eligibility. We believe that the city has been successful; fewer families appear to be drawn by the prospect of obtaining permanent subsidized housing.” [Emphasis added.]

In 2005, in former-Mayor Bloomberg’s most disastrous homeless policy change, he and his administration administration eliminated priority use of federal housing programs (public housing and Section 8 vouchers) for homeless children and families. Bloomberg replaced those proven, successful federal programs with wasteful, ineffective short-term rent subsidy programs (Housing Stability Plus and Advantage) – and ultimately the termination of all housing assistance for homeless families in March 2011.

Bloomberg administration officials claimed that “de-linking” housing subsidies from the homeless shelter system would lead to fewer homeless families seeking shelter. But exactly the opposite happened.

As the following chart clearly shows, after Bloomberg eliminated priority referrals to federal housing programs in 2005, the number of families entering the NYC homeless shelter system actually increased significantly – even before the post-2008 economic downturn. 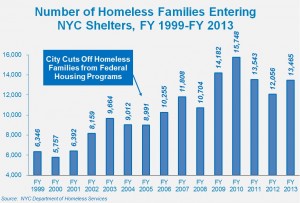 And, as the chart also clearly shows, even since March 2011, when the Bloomberg administration eliminated all housing subsidies for homeless families, the number of families entering the shelter system has continued at historically high levels, including a 12% increase between FY 2012 and FY 2013.

In 2012, the NYC Independent Budget Office (IBO) analyzed a New York City Council proposal to restore priority referrals of homeless New Yorkers to federal housing programs as part of that year’s City budget negotiations. And the IBO also found that providing housing subsidies to homeless shelter residents would NOT result in a surge of families entering the shelter system.

Instead, the IBO found that the City Council plan would both reduce homelessness AND save millions in taxpayer dollars otherwise spent on costly shelter. Here are the IBO’s key findings:

“IBO found that savings would be proportional to the number of placements made. Family shelter costs would be reduced by a total of $14.7 million with 2,500 placements and $29.4 million with 5,000 placements. With family shelter funding shared between the federal, state, and city governments, slightly more than a third of the reduction, about $5.5 million and $11.0 million, respectively, would reflect savings for the city.” [Emphasis added.]

As noted above, Bloomberg administration officials used to routinely claim that the availability of housing subsidies leads to a surge of families seeking shelter. Indeed, Linda Gibbs, the architect of Bloomberg’s failed homeless policies, made precisely those claims as far back as October 2004, when she announced the imminent plan to cut off homeless families’ access to federal housing programs. Reporting on that announcement, the New York Daily News noted:

“At the same time, Gibbs said, families are deliberately going into the shelter system as a way to get to the front of the line on rental assistance.”

And the New York Times reported:

[Linda Gibbs said] the program was making poor families believe that the fastest road to getting their own apartment was to become homeless. “We don’t want people to think that the best way to get housing is to bundle their children up and take them to the E.A.U.,” she said referring to the Emergency Assistance Unit, the Bronx office that is the entry point for the city’s shelter system.

In later years – particularly after Bloomberg eliminated all housing subsidies for homeless families in 2011 – Bloomberg administration officials repeated the claim that providing housing aid to shelter residents causes a surge in families seeking shelter. However, Bloomberg officials never produced any empirical evidence to support these claims.

Therefore, in 2012 Coalition for the Homeless submitted a freedom of information request asking for “Any and all documents that support City officials’ assertions that resuming priority referrals of homeless shelter residents to NYCHA waiting lists for public housing and Section 8 vouchers will result in more families seeking shelter.”

In response to this freedom of information request, the Bloomberg administration only produced three documents: (1) a chart with incomplete data from 2004 and 2005; (2) a blank survey questionnaire; and (3) the results of a survey of families seeking shelter at the Bronx intake office, in which 4 of 210 families who were asked “What made you apply for shelter today?” answered “yes” to “You are looking for subsidized/affordable housing” – but also answered “yes” to other questions involving eviction, unsafe housing, overcrowding, and domestic violence.

The bottom line: Claims by right-wing ideologues and Bloomberg officials that targeting housing aid to homeless families leads to a surge in families seeking shelter are bogus. These claims have been repeatedly proven false by academic researchers, budget analysts, and the historical record.

But what is true is that long-term housing subsidies lead to significant reductions in family homelessness. Indeed, a wide range of academic experts have found, in numerous research studies, that permanent housing assistance like public housing or Section 8 vouchers helps homeless families escape homelessness AND remain stably housed.

“An extensive body of careful research has demonstrated that housing vouchers are critically important both for preventing families with children from becoming homeless and for helping those who do enter the shelter system to leave it for permanent housing and not become homeless again….For families who do become homeless, housing vouchers are an extensively tested and demonstrably effective tool for moving to permanent housing and remaining stably housed.” [Emphasis added.]

And Marybeth Shinn of Vanderbilt University, in her paper “Ending Homelessness for Families: The Evidence for Affordable Housing” (available here), also summarizes the wealth of research on this topic:

“This paper reviews research showing that homeless families are far more similar to other poor families than to homeless adults without families, but they do not have the resources to secure housing. It examines patterns of shelter use and returns to stable housing and shows that housing that families can afford is sufficient to end homelessness – or to prevent it – for most families. Extensive research demonstrates that housing subsidies solve homelessness for the majority of families.” [Emphasis added.]

In fact, a respected Vera Institute study from 2005 – which was commissioned by the Bloomberg administration itself! – confirmed these findings:

“Across all cohorts and follow-up periods, those families exiting to subsidized housing exhibited the lowest rates of reentry. Subsidized housing appears to be associated with better protection against shelter return than exiting to one’s own housing, other destinations, or unknown arrangements.” [Emphasis added.]

And just this month the Center for Budget and Policy Priorities published a research survey entitled “Research Shows Housing Vouchers Reduce Hardship and Provide Platform for Long-Term Gains Among Children” that found:

“[Federal housing vouchers] sharply reduce homelessness and other hardships, lift more than a million people out of poverty, and give families an opportunity to move to safer, less poor neighborhoods. These effects, in turn, are closely linked to educational, developmental, and health benefits that can improve children’s long-term life chances and reduce costs in other public programs.” [Emphasis added.]

Moving forward, and as we highlighted in our State of the Homeless 2014 report, we are hopeful that Mayor de Blasio and Governor Cuomo will embrace the overwhelming evidence showing the success of housing-based policies to address the problem of record-high homelessness in New York City. 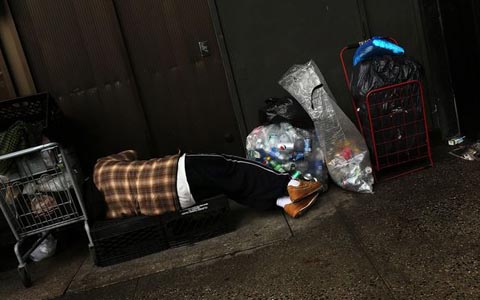