– Over 6,500 former-Advantage families have returned to shelter, including over 14,000 children, at a price tag of $188 million;
– 38 percent of all former-Advantage families without ongoing rental assistance have returned to shelter;
– For the first time ever, more repeat families are entering shelter than new families;
– The increase in repeat families entering the shelter system has contributed to current record homelessness and has cost taxpayers $700 million over seven years.

These findings illustrate that the current homelessness crisis has its roots in the end of permanent housing assistance for homeless families in 2005 (when the City ended priority referrals for homeless families to federal programs, such as public housing and Section 8). Since then, the shelter population has continued to rise, even during the years when short-term subsidies like Advantage were in place. 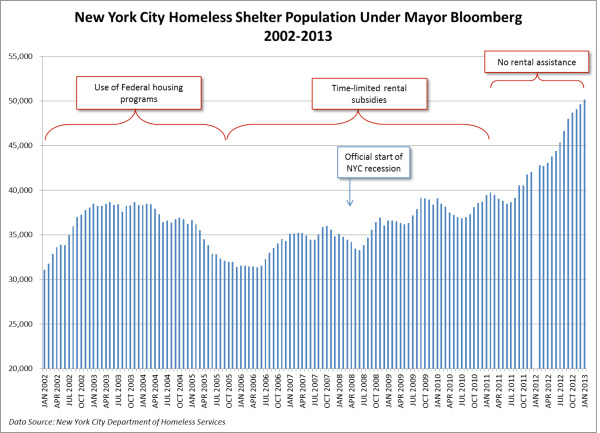 Ignoring its own data, today the Bloomberg Administration continues to deny vital Federal housing assistance to homeless children and adults. The sad result, if the administration doesn’t change course immediately, will be ever more homeless families languishing in shelters for longer lengths of time with no way out. Even more tragically, thousands of families will continue to experience multiple episodes of homelessness, with thousands of children bearing the worst consequences of this instability.