NEW YORK — A coalition of advocacy and service organizations, including the Coalition for Homeless, released a letter to Mayor de Blasio and Governor Cuomo today, urging them to open thousands of vacant hotel rooms to provide isolation for vulnerable and sick homeless people.

“With New York’s record-breaking homelessness crisis and this evolving pandemic, COVID-19 has the potential to devastate our most vulnerable communities, especially as homeless New Yorkers struggle without private places to self-quarantine and social distance from others,” said Giselle Routhier, Policy Director at Coalition for the Homeless. “We are calling on Mayor de Blasio and Governor Cuomo to take swift action by providing thousands of hotel rooms to homeless New Yorkers to make it possible for them to properly isolate, and to reduce bureaucratic barriers to accessing those isolation spaces in order to limit the spread of the virus and the severity of its impact.”

Letter is pasted below and attached.

Re: Meeting the need for isolation space for homeless New Yorkers

There is an urgent humanitarian crisis among homeless New Yorkers with the spread of COVID-19. There are approximately 70,000 people sleeping in DHS, HRA, DYCD, and HPD shelters each night, including 19,000 single adults sleeping in Department of Homeless Services (DHS) congregate shelters and many more individuals sleeping in other congregate shelter systems. Thousands of homeless New Yorkers are still struggling to survive on the streets while contending with a drastic reduction in access to food, hygiene supplies, bathrooms, showers, and clothing. The economic upheaval brought on by the public health crisis is already leading to increased homelessness among the scores of precariously housed New Yorkers.

Homeless adults, who are at increased risk of contracting COVID-19 and experiencing severe complications, are in desperate need of private places to self-isolate. In the week ending with March 21, 2020, only 16.8 percent of all hotel rooms in New York City were occupied, leaving an 83.2-percent vacancy rate. This means there are currently more than 100,000 vacant hotel rooms that could be used to temporarily house homeless New Yorkers. Mayor de Blasio and Governor Cuomo: The undersigned organizations urge you to immediately use this resource in order to 1.) prevent the spread of COVID-19 among an extremely vulnerable homeless population, 2.) reduce the severity of illness for homeless people in need of a private space to care for themselves but who do not require hospitalization, and 3.) help prevent overcrowding and virus spread in hospital inpatient units and emergency departments due to a lack of appropriate discharge locations for homeless individuals. 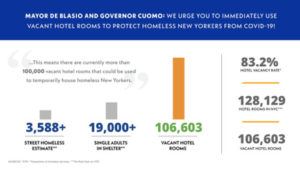 In addition to the need for hotel beds, you must drastically improve access to these beds and communication among shelter providers, hospital staff, and homeless individuals. As it stands, advocates and health care providers have witnessed an array of problems accessing the already-limited supply of approximately 200 isolation shelter beds: Individuals have been discharged back to congregate shelters while awaiting COVID-19 test results; hospitals have been unable to reach DHS for guidance on isolation shelter placements; and multiple individuals have been denied access to isolation shelter beds because they were not recently in the DHS shelter system (including youth, unsheltered individuals, and newly homeless people). All of these scenarios are worsening an already unspeakably deadly crisis.

Furthermore, although DHS has set up a procurement process for providers to operate isolation shelter beds in hotels, they have crafted the contract requirements in such an onerous way as to preclude nearly all providers from bidding. According to the procurement standards, these contracts will require their nurses to supply their own personal protective equipment (PPE), which is nearly impossible for individual providers to do because of the present severely limited supply.

As of April 1st, there were 136 cases of COVID-19 reported in 74 DHS shelters, in addition to seven homeless New Yorkers testing positive while living on the streets. On April 1st, 35 homeless people were hospitalized and five deaths had been reported. Because testing and access to treatment for people with mild illness is limited, the extent of illness and death among homeless New Yorkers is likely already far more extensive than what is officially reported – and similar to the experience of other vulnerable populations living in nursing homes and jails, it is growing daily. The latest federal stimulus bill provides $4 billion in Emergency Solutions Grant (ESG) funds, and New York City is likely to receive hundreds of millions in aid as a result. ESG funds can be used to provide temporary emergency shelters such as hotels (waiving federal habitability and environmental review standards), staff costs, training, and hazard pay. Funding is available. There is no excuse not to act.

All homeless individuals in congregate settings need the ability to practice safe social distancing and the City and State must provide resources to make this possible. To this end, the undersigned organizations call on Mayor de Blasio and Governor Cuomo to immediately open thousands of hotel rooms to provide isolation for:

We additionally call on Mayor de Blasio and the Department of Homeless Services to immediately reduce bureaucratic barriers to accessing isolation space by:

Lastly, we urge Governor Cuomo and Mayor de Blasio to prioritize any staff at isolation hotels and shelters where staff or shelter residents have tested positive for COVID-19 or have COVID-19-like illnesses for access to incoming supplies of PPE.