NEW YORK, NY — The Coalition for the Homeless released its State of the Homeless 2019 report today, providing a comprehensive look at homelessness in New York City. The report finds that policy failures by the City and State have exacerbated the decades-long homelessness crisis stemming from New York’s severe lack of affordable housing. In January 2019, an all-time record 63,839 men, women, and children slept in New York City shelters each night.

In 2017, Mayor de Blasio’s Turning the Tide on Homelessness plan projected a decrease in the shelter census of just 2,500 people by 2022. In contrast, State of the Homeless 2019 shows that the shelter census is on track to increase by 5,000 people by 2022 unless the Mayor immediately changes course and increases the number of apartments set aside for homeless New Yorkers through his Housing New York 2.0 plan. To achieve a meaningful decrease in the shelter census, the Mayor must implement the House Our Future NY Campaign’s recommendation to build 24,000 new apartments – and preserve at least 6,000 more – for homeless families and individuals.

As in past years, State of the Homeless includes a “report card” that grades the City and State on their respective efforts to prevent homelessness, improve shelters, and create permanent, long-term solutions to the crisis. The report evaluates these and other key policy areas that impact homeless New Yorkers.

The report card gives Mayor de Blasio a failing grade on his efforts to create sufficient housing for homeless New Yorkers and Governor Cuomo multiple failing grades on housing vouchers, homelessness prevention, and systematic cost-shifting practices that unduly burden the City. To assist the Mayor and Governor in raising their grades, the State of the Homeless 2019 outlines tools the City and State have at their disposal to reduce the number of homeless families and individuals, while also improving conditions in shelters.

“New York City’s homelessness crisis will not improve until the Mayor uses every tool at his disposal. That means devoting at least 30,000 apartments in his Housing New York 2.0 affordable housing plan for homeless New Yorkers, with at least 24,000 of those apartments to be created through new construction. With this simple change, the City can provide thousands of homeless men, women, and children with safe, clean, and stable homes,” said Giselle Routhier, policy director for the Coalition for the Homeless.

“As Chair of the General Welfare Committee this report is another stark reminder that we must do more to ensure that every New Yorker has a place to live and call home. I applaud the Coalition for the Homeless for their continued expertise on this topic and the work they put into this annual report. These sets of recommendations provide a clear roadmap to achieving meaningful, long-lasting policy changes. Through measures such as increasing set asides for homeless individuals and families, expanding access to supportive housing, and finally implementing the Home Stability Support program we can make meaningful strides in reducing the shelter population and providing permanent housing for all New Yorkers,” said Council Member Stephen Levin.

The State of the Homeless 2019 “report card” grades the City and State on their efforts to end the homelessness epidemic as follows: 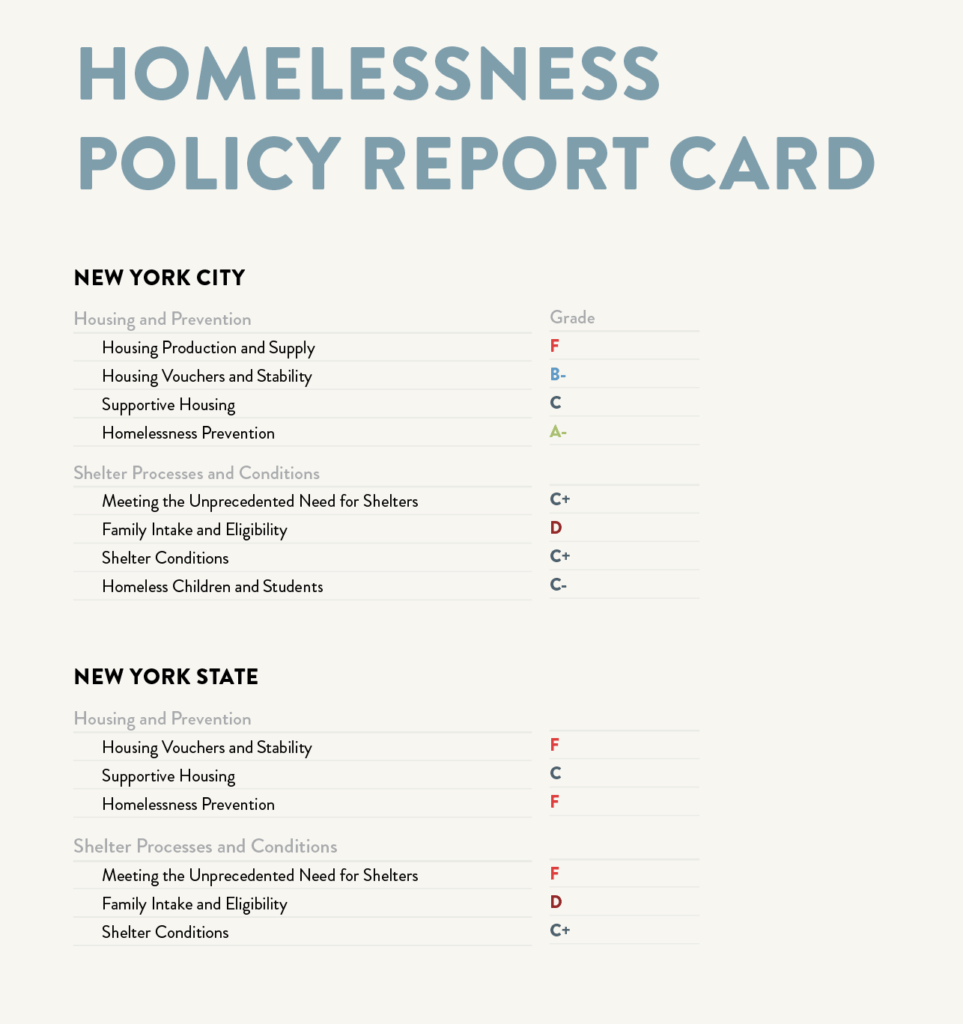 “Too many of our neighbors in are living day to day without a place to call home or are on the verge of losing the home they have,” said New York State Senator Liz Krueger. “The tragic problem of homelessness in our state has long been at crisis levels. We know what the solutions are, we just need the political will to implement them, and that includes funding Home Stability Support, a lifeline for thousands of New Yorkers to avoid falling into the cycle of homelessness while saving millions of dollars for towns, counties, and cities throughout the state. This crisis has gone on long enough – it’s time for long-term solutions.”

“New York is facing its worst homeless crisis since the Great Depression and we have failed at the state level to adequately combat this growing epidemic. We need to pass Home Stability Support to create a State-funded, long-term rent subsidy for households on public assistance who are homeless or at risk of losing their housing due to eviction, domestic violence, or hazardous housing conditions,” said Assemblyman Andrew Hevesi.

“We have reached a critical juncture when it comes to homelessness in New York City. Despite numerous city and statewide initiatives meant to address this serious matter, the issues continue. While officials can point fingers, the truth of the matter is that we need to take collective action if we are going to appropriately address this issue and the time to implement sound, effective policy is now. In addition to eliminating rent law loopholes and increasing vouchers and subsidy programs, we must increase the homeless set aside. Standing with advocates from Coalition for the Homeless, I introduced legislation in the City Council calling on HPD to increase homeless set-asides in new rental developments receiving city subsidies. Since introduction, several colleagues and I have instituted this very policy in our respective districts. It can be done, but like many of the initiatives debated, there needs to be a collective political will power to enact these policies,” said Council Member Rafael Salamanca.

“5,000 more New Yorkers living in shelters by 2022 demands a robust response from both our City and State leaders,” said Council Member Margaret S. Chin. “Sadly, according to the Coalition for the Homeless’ State of the Homeless 2019, both City Hall and Albany are failing in their response to the growing emergency. The depth of the homelessness crisis demands more, and both the Mayor and the Governor must tackle homelessness in a comprehensive way.”

“As the population of our municipal shelters balloon to ignominious records and countless more people sleep in trains, sidewalks and on subway grates every night, the homelessness crisis has emerged as the most glaring symptom of New York City’s housing emergency,” Council Member Francisco Moya said. “The solution requires concerted efforts along several flanks, but one thing it most certainly does not include is allowing developers to put their own greed over the well-being of this city. It’s critical that we build more housing, including and especially affordable housing, and that the construction of these buildings creates good-paying jobs and a pathway to the middle class.”

“It is clear that our City and State are failing to adequately serve New Yorkers experiencing homelessness. This troubling report must serve as a catalyst for change. Our city needs a comprehensive housing plan to better support individuals and families facing housing instability and all marginalized people who have been failed by the system. We must commit to investing long-term in public housing, supportive housing, and affordable housing, as well as improving shelter conditions and services, to ensure all New Yorkers’ dignity, safety, and right to housing,” said Council Member Jimmy Van Bramer.

“There is a clear disconnect between Mayor De Blasio’s study on decreasing the shelter population and the Coalition for the Homeless’ State of the Homeless 2019 report. The administration should adopt the House Our Future NY Campaign recommendations to increase the number of deep affordable housing units to 30,000 as part of the Housing New York 2.0 plan and prioritize the expedition of City-funded supportive housing units. Additionally, the City needs to drastically improve shelter conditions to reduce the traumatic experiences homeless families face. This is unacceptable and I look forward to being a strong advocate along with my colleagues to ensure that homeless New Yorkers are better prioritized in this budget,” said Council Member Vanessa L. Gibson.

“Tonight, tens of thousands of men, women and children will sleep in homeless shelters across our city, and the Coalition for the Homeless’ latest report indicates that another 5,000 New Yorkers could be living in shelters by 2022. This is beyond unacceptable, and despite the current housing construction boom, there is no clear-end in sight. I stand with the Coalition for the Homeless and the House Our Future Coalition in their call for more aggressive development of affordable housing – it is the only solution to this human crisis,” said Council Member Helen Rosenthal.

“While addressing homelessness has been at the forefront of our city’s agenda, affordable, permanent housing for homeless New Yorkers must continue to be a major component of the city’s plans,” said Council Member Barry S. Grodenchik. “The current system too often seems like a band-aid on a critical wound, so I stand with the coalition to say that at this time of crisis, building significantly more housing for homeless families is absolutely critical.”

“The State of the Homeless 2019 report reflects how dire the situation we face as a City is. Fighting homelessness should be a priority,” said Council Member Ben Kallos. “An ‘F’ in housing production and supply means the Mayor must simply do more in addressing this housing crisis by implementing a plan that places a roof over people heads right now, not in 10 years. These are real lives and families that need a stable, safe place to live. We have to build more housing dedicated to housing already homeless New Yorkers. I strongly recommend the Mayor and Governor consider the outlined steps drafted by State of the Homeless 2019. Thank you to Coalition for the Homeless for focusing on this issue and publishing this report.”

“I want to commend the Coalition for Homeless on their efforts to bring increased attention to the homeless crisis in New York City. It is not right when thousands of hardworking New Yorkers and their families are forced to live in shelters because they cannot afford a place to live. In the great city of New York, we have the resources available to end this epidemic, but we must continue to work together to find an effective solution. I believe that the State of the Homeless Report for 2019 is an important part of that process, and I applaud our city’s homeless advocates for their work on this very important issue,” said Council Member Mathieu Eugene.

“The State of the Homeless 2019 report is a sobering reminder that our homelessness crisis shows no signs of abating; in fact, it is only getting worse. Unfortunately, the City’s affordable housing program is still not reaching those in the greatest need. We need to make a concerted effort to drastically increase housing set-asides for our homeless population, as the House Our Future NY Campaign has recommended. In the short-term, we also have to ensure the people living in our shelters are treated with dignity and respect. I have legislation that would require customer service training to DHS employees and shelter providers, and another that would tackle the issue of retaliatory transfers, where shelter residents are uprooted from the communities in which they live. Using a multi-pronged approach, we can turn the tide on homelessness and ensure all New Yorkers have a place to call home in our city,” said Council Member Rafael Espinal.

State of the Homeless 2019 outlines key steps the City and State can take immediately to increase housing options for homeless New Yorkers and improve shelter conditions and processes, which will in turn dramatically reduce homelessness.

The Mayor and Governor together should:

The City and State must also improve shelter conditions and processes in order to reduce the trauma of homelessness for families, children, and single adults; develop short- and long-term residential supports to address the needs of individuals with medical conditions released from hospitals and other institutions who cannot be accommodated within the shelter system; and reduce overall disruption for homeless children and students.