Record Homelessness in the Spotlight, But With Little Focus on the Root Cause

Posted on February 6, 2012 by GISELLE ROUTHIER

A story in this Sunday’s New York Times sounded all too familiar. A homeless family spends hours each day commuting to work, day care and school, all to maintain a sense of normalcy in an otherwise unstable life. This is reality for homeless mom Tonya Lewis… and 41,000 other homeless men, women, and children citywide.

But what may be the most relevant piece of Ms. Lewis’s story is merely glossed over– this is not the first time her family has been homeless. Prior to entering shelter this time, she and her family had been living in an apartment and receiving a temporary rental subsidy for formerly-homeless families called Advantage. As soon as Ms. Lewis reached the time limit on the subsidy, she was left with a rent she couldn’t afford. As a result, she is back in shelter, along with thousands of other formerly-homeless families, at a cost of hundreds of millions of dollars to the City and untold costs in the lives of their children.

Indeed, one of the main reasons for New York City’s current crisis of record homelessness is a dramatic rise in the number of families experiencing repeat episodes of homelessness. In 2011, half of all shelter entrants had experienced a prior episode of homelessness, up from only a quarter in 2005. In numeric terms, repeat families rose from 2,300 applicants in 2005 to 6,600 in 2011– a nearly three-fold increase! 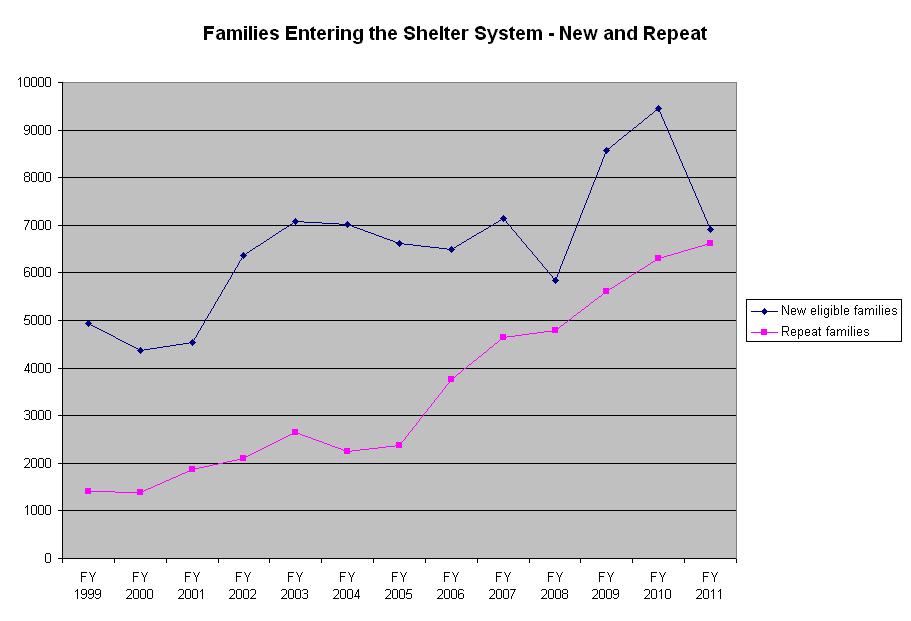 This problem has been fueled by the use of time-limited subsidies like Advantage over real permanent housing solutions like public housing and Section 8 vouchers. This shift in policy was implemented by Mayor Bloomberg in 2005, and the results have been disastrous for homeless families, in addition to costing the city hundreds of millions of dollars in shelter expenses.

Yet once again, this part of the problem goes unnoticed even as it is about to get worse. The City announced last week that it would immediately stop paying rental subsidies for as many as 10,000 formerly-homeless families. It looks like we may be seeing more families like Ms. Lewis struggling to stay afloat in a City that has so far shown no impetus to help them.