The number of homeless single adults in the New York City shelter system has drastically risen over the past year, defying usual trends and reaching a level not seen in over two decades.

The average nightly shelter census for single adult men and women in October 2009 was 7,603. As of this month, October 2010, that number is now 9,114–an increase of 1,511 individuals over the course of just one year. Perhaps even more disturbing is the steady and continual climb throughout the year. Data going back decades shows that the number of homeless single adults usually drops during the summer months (due to the warmer weather) and then rises again in the winter months. But this past year, the census stayed virtually the same from March to June and then actually increased in July and August. This unusual occurrence raises significant concerns about the coming winter months and how high the numbers may continue to climb. 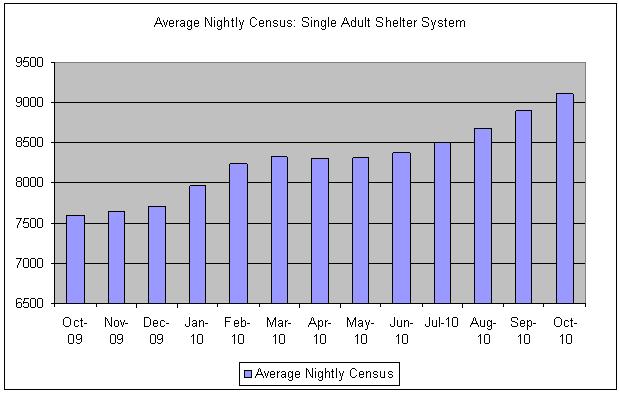 October’s average nightly census is higher than any other time since 1989, when there were 9,342 homeless men and women in the City’s shelter system each night. So far, in 2010, we are seeing the highest number of homeless single men and women in over two decades!

These numbers speak to the ongoing economic crisis that many low and middle-income New Yorkers are facing, including joblessness, a lack of affordable housing, and stagnating wages.

As the court-appointed monitors of the adult shelter system under Callahan v. Carey, the Coalition will continue to monitor the ongoing capacity crunch in our City’s shelters and continue to protect the right to shelter for all individuals finding themselves in a crisis of homelessness.

*Note: Data is from the Department of Homeless Services Daily Adult Shelter Statistics and includes Safe Haven and Veterans statistics.