On Tuesday the Coalition released State of the Homeless 2013 which — based on the Bloomberg administration’s own numbers — documents that more than 50,000 homeless New Yorkers, including 21,000 children, sleep each night in the NYC shelter system, an all-time high.

Since Mayor Bloomberg took office, the NYC homeless shelter population has grown by 61 percent and the number of homeless families has increased by a shocking 73 percent. Our report details the failure of Mayor Bloomberg’s policies, in particular his refusal to use the successful approach of previous mayors — including Federal housing resources to help homeless families secure permanent housing.

Today Mayor Bloomberg once again shirked responsibility for unprecedented homelessness. He instead laid out a fantastical scenario that, according to the New York Daily News, went like this:

Mayor Bloomberg on Friday blamed the record number of people in homeless shelters on a legal requirement that – in his view – requires the city to give people a bed at night even if they arrive in town in a “private jet.”

“You can arrive in your private jet at Kennedy Airport, take a private limousine and go straight to the shelter system and walk in the door and we’ve got to give you shelter,” Bloomberg said on his weekly radio show on WOR-AM.

Bloomberg apparently was referring to a consent decree signed by then-Mayor Ed Koch in 1981 that compels the city to provide shelter and board to homeless men who qualify for welfare or are homeless “by reason of physical, mental, or social dysfunction.”

It was not immediately clear Friday if there ever had been a case of someone flying into New York on a jet and taking a limo straight to a homeless shelter – or whether such a person could qualify for a bed.

The mayor went on to urge New Yorkers to call their State legislators to ask them to “change the law,” saying “New York City taxpayers have just gotta go to call their representatives in Albany and say, ‘We ain’t gonna do this anymore.’”

New York City’s legal right to shelter for homeless people is enshrined in the 1981 Callahan v. Carey consent decree, signed by the late Mayor Ed Koch, protecting homeless single adults, and a 2008 court settlement (Boston v. City of New York) which was negotiated and signed by Bloomberg’s own administration.

The legal right to shelter is rooted in Article XVII of the New York State Constitution, which states that “The aid, care and support of the needy are public concerns and shall be provided by the state and by such of its subdivisions….” Article XVII was adopted by New York voters in 1938, in the midst of the Great Depression, and has provided a vital safety net for poor and vulnerable New Yorkers ever since.

It would appear that Mayor Bloomberg is urging New Yorkers and the State Legislature to repeal an article of the New York State Constitution.

This is a fairly radical proposal. Indeed, ending the right to shelter would potentially force thousands of homeless children and adults into the streets, something no New Yorker wants to see.

But there’s nothing about the right to shelter that prevents the City from implementing housing-based solutions to the problem of homelessness. In fact, under Mayors Koch, Dinkins and Giuliani, the City moved tens of thousands of homeless families form shelter to permanent housing, using Federal and City housing resources, as shown in the charts below. And independent budget analysts have found that doing so again would both reduce the number of families in shelter AND save City taxpayer dollars spent on the costly shelter system.

THAT is exactly the kind of effective policy change that the Coalition has called for. And sadly, that is what Mayor Bloomberg has refused to do.

Instead of attacking the right to shelter, which protects thousands of vulnerable New Yorkers every day, Mayor Bloomberg should work to enact the kids of proven, housing-based solutions that will actually reduce the need for shelter for so many children and adults. 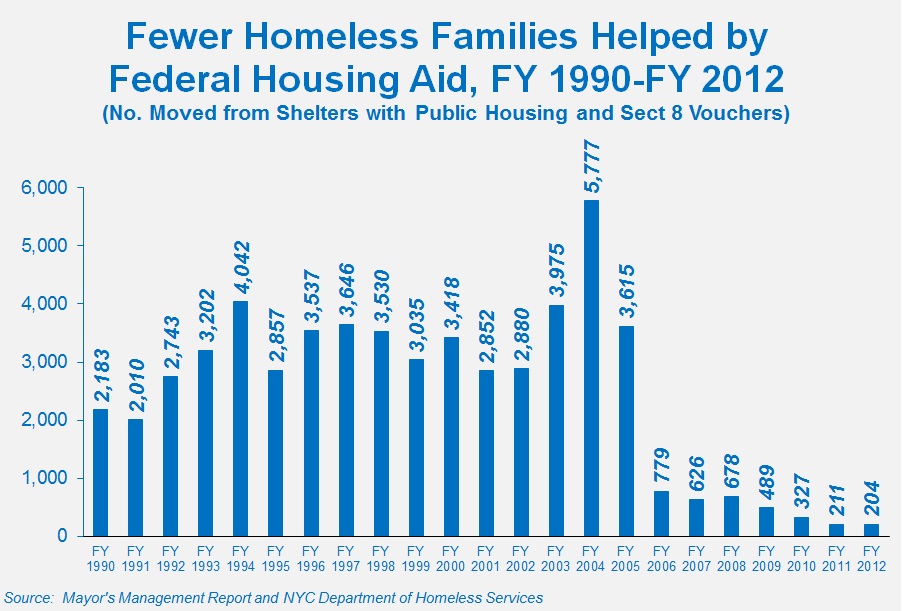 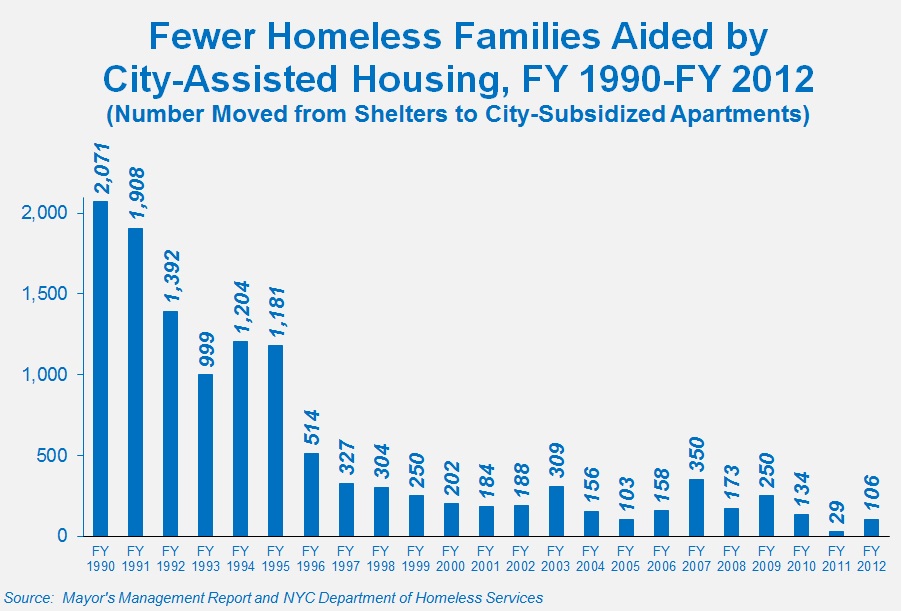