“When I said we would take dead aim at the Tale of Two Cities, I meant it. And we will do it. I will honor the faith and trust you have placed in me. And we will give life to the hope of so many in our city. We will succeed as One City. We know this won’t be easy – it will require all that we can muster.”

As record homelessness persists on New York City’s streets and in its shelter system, it is critical to ask: Why does the homelessness crisis remain unabated after Mayor de Blasio has had nearly six years to implement his much-touted “progressive” policy blueprint? The answer is unfortunately simple: The Mayor’s signature housing plan exacerbates the city’s bifurcated housing market by creating a glut of high-rent units instead of investing precious resources in the production of desperately needed extremely low-rent apartments. Equally lamentable is the plan’s inadequate investment in new apartments to be built specifically for the nearly 61,000 New Yorkers who sleep in shelters every night: Only 6,000 are planned through 2026.

This stark disconnect between Mayor de Blasio’s ineffectual affordable housing plan and the reality of record homelessness explains why, well into his second term, his approach is failing to reduce mass homelessness in New York City. The plan, which is cavalierly defended by the Mayor whenever it is questioned, is the object of widespread criticism for offering too little too late for a problem that will undoubtedly define his mayoralty.

New York City’s Housing Market is Not Meeting the Needs of the Lowest-Income New Yorkers.

Homeless and extremely low-income households increasingly find New York City’s housing market out of reach. Between 1999 and 2017, the city lost over one million apartments renting for less than $800 per month. During this time, the difference between the number of households needing these low-rent apartments and the number of them available for rent expanded greatly. In 2017, there were approximately 560,000 more households in need of low-rent apartments than there were apartments affordable to them on the private market – evidence of the disparity between rising rents and stagnant incomes over the past several decades. 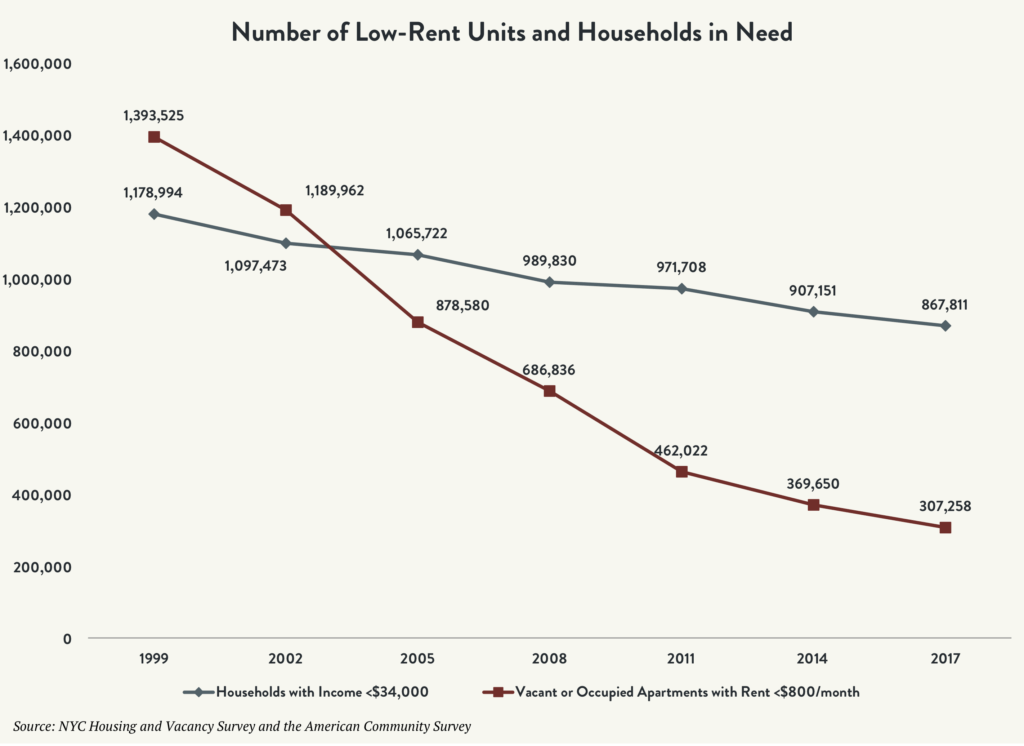 While New York City’s housing market hemorrhaged low-rent apartments, the number of high-rent units costing more than $2,000 per month surged, resulting in vastly different market conditions for low- and high-income renters. In 2017, apartments with rents below $800 per month had a vacancy rate of just 1.15 percent – far below the housing emergency threshold of 5 percent set by the State in 1974 and below the overall rental vacancy rate of 3.63 percent. Meanwhile, apartments available for more than $2,000 per month had a vacancy rate of 7.42 percent, far above the emergency threshold, indicating excess supply for those able to pay a premium for a place to live in New York City. 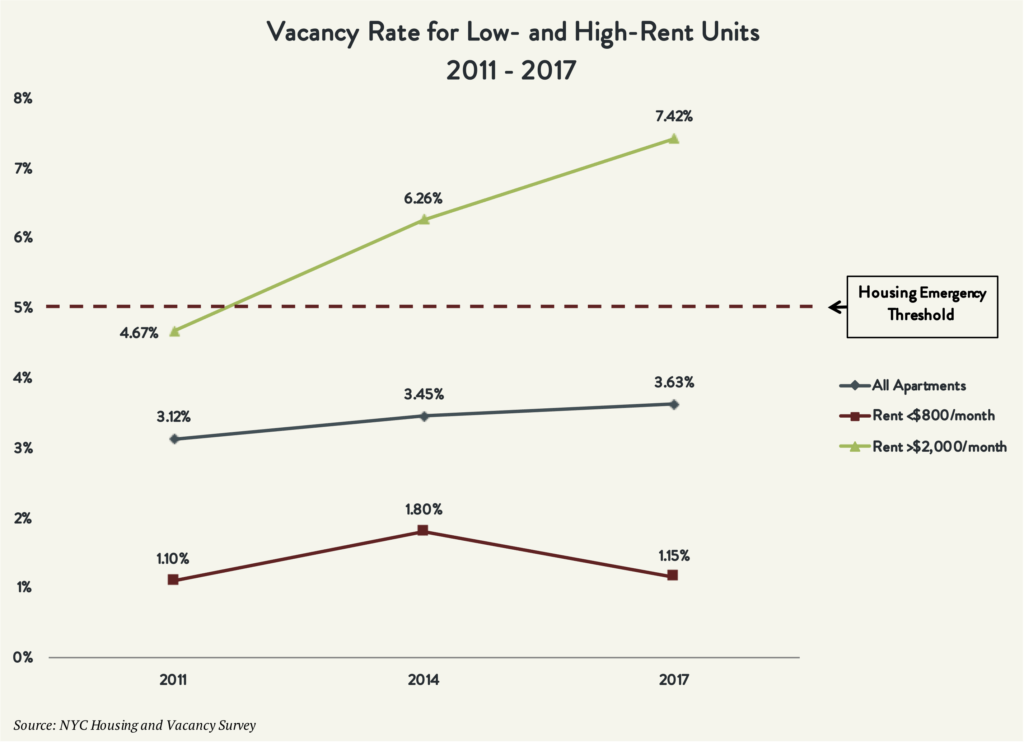 Even when homeless households receive a City-funded rent supplement (known as CityFHEPS), it remains extremely difficult for them to find apartments they can afford: Vacancy rates at CityFHEPS rent levels range from a mere 1.82 percent for studios to 2.96 percent for three-bedroom apartments. Disturbingly, there are now more homeless single adults living in shelters (17,887 people) than there are vacant apartments for rent at the CityFHEPS subsidy level for studios (16,480 apartments), signaling an extreme crisis for the fastest-growing segment of the homeless population.[1] The unmistakable bottom line is this: Unless the City builds enough housing for homeless New Yorkers, homelessness will continue to grow. 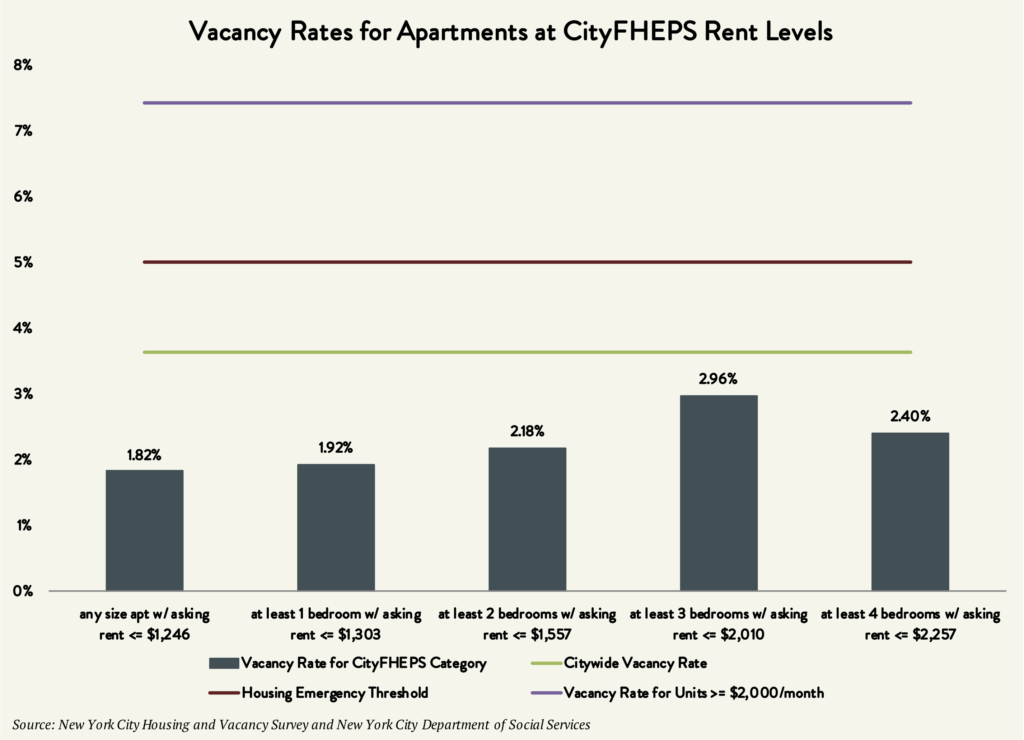 Mayor De Blasio’s Policies Have Exacerbated the Imbalance in the Housing Market and Ignored the Needs of Homeless New Yorkers.

Instead of investing resources where they are most needed by creating housing at the lowest rent levels and building apartments specifically for homeless New Yorkers, Mayor de Blasio has fueled the crisis by squandering limited resources to subsidize the production of expensive apartments. His 300,000-unit Housing New York 2.0 plan aims to create or preserve 60,000 apartments (20 percent) with rents above $1,700 per month, while setting aside just 15,000 apartments for homeless households (a mere 5 percent of the plan). Even more troubling, the majority of homeless set-aside apartments (roughly 9,000) are preservation units, not new housing. While the affordability of these already-occupied apartments will be sustained, only a handful turn over each year. Preserving affordability costs less than building new apartments, but does nothing to expand the housing stock or provide homes for the thousands of homeless families and individuals currently relegated to shelters.[2]

The small number of homeless families and individuals moving out of shelters and into City-financed apartments underscores the all-too-predictable outcome of Mayor de Blasio’s woefully inadequate attention to building housing for the neediest New Yorkers. From January 2014 through December 2018, the Department of Housing Preservation and Development (HPD) assisted 2,391 homeless households to move out of shelters and into Housing New York 2.0 set-aside units. These placements average just 478 per year over the five-year period, even as the number of households sleeping in shelters each night exceeded 32,000.[3] 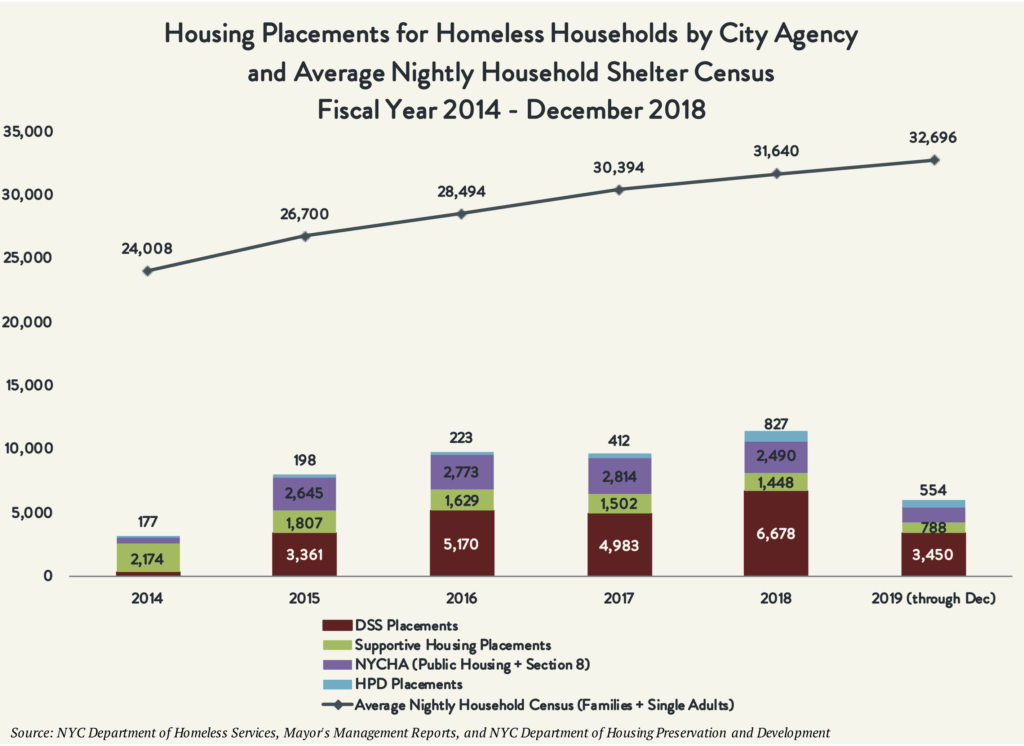 The remaining subsidized shelter exits during this period were facilitated through the Department of Social Services (DSS) and the New York City Housing Authority (NYCHA) through the use of rent supplements and vouchers, supportive housing, and priority access to public housing. On average, including HPD placements, just over 8,700 households moved out of shelters and into permanent housing each year between July 2013 and December 2018. By contrast, the last time there was any meaningful decline in the shelter census (during the peak of Mayor Bloomberg’s use of Federal housing assistance for homeless families between 2002 and 2005), more than 6,100 households on average exited shelters each year. Although shelter exits have increased by 42 percent since that time, the number of households in shelters is now 75 percent higher. Mayor de Blasio’s efforts to reduce homelessness in New York City are clearly inadequate, given the scale of the need. 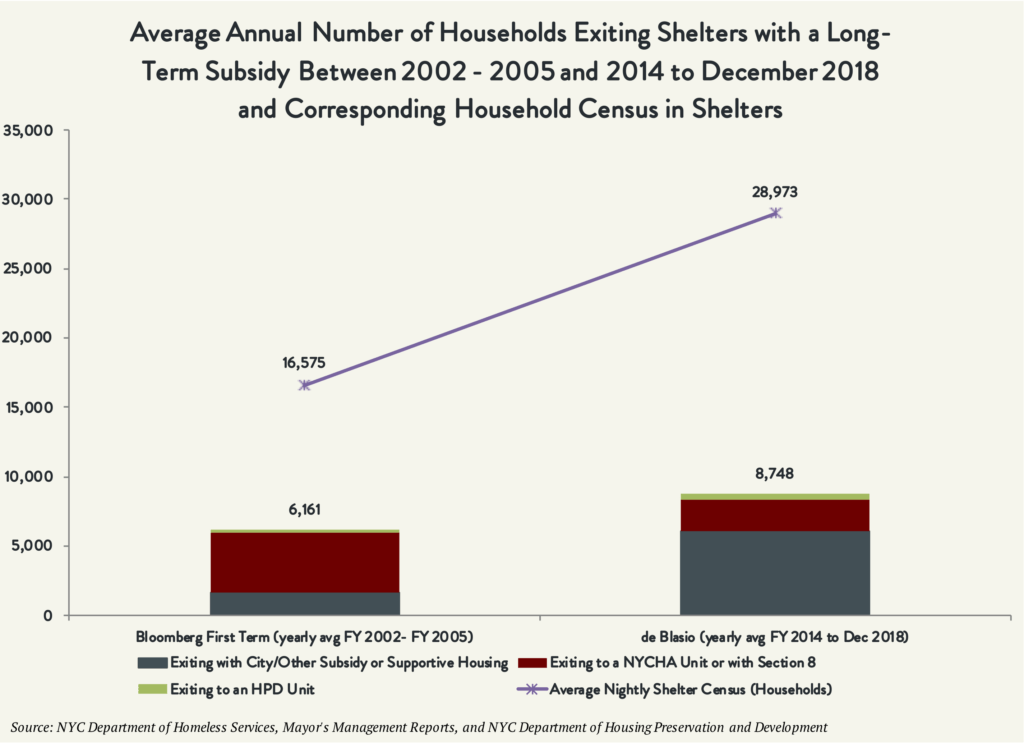 The Legacy of Housing New York 2.0 Will Be Billions of Dollars Squandered to Further Bifurcate the Housing Market and Perpetuate Mass Homelessness.

Given the current state of record homelessness, the Housing New York 2.0 plan could be used as a once-in-a-generation opportunity to meaningfully expand the housing supply where it is needed most – for extremely low-income New Yorkers currently without apartments and living in shelters or on the streets. However, Mayor de Blasio has instead chosen to invest billions of City tax dollars in a plan that will do little to address the housing crisis for the people who are experiencing these pressures most acutely.[4] He obstinately refuses to seize the opportunity to show true leadership by using the resources at his disposal to “take dead aim at the Tale of Two Cities” and create some semblance of equal opportunity in the housing market.

For the past year and a half, the city’s leading advocates and elected officials have implored Mayor de Blasio to build 24,000 new apartments specifically for homeless New Yorkers through the Housing New York 2.0 plan, and to preserve the affordability of at least 6,000 more already-occupied apartments, for a total of 30,000 units out of his 300,000-unit plan.[5] With this bold (and sensible) investment, thousands more families and individuals could leave shelters each year, move into permanent housing, and put the City on a trajectory to actually reduce homelessness for the first time in 15 years. By refusing to make this critical investment, Mayor de Blasio is squandering resources, breaking his One City promise, and steering our city in the wrong direction. On Mayor de Blasio’s watch, New York is on track to see homelessness rise by another 5,000 individuals in the next five years.[6] 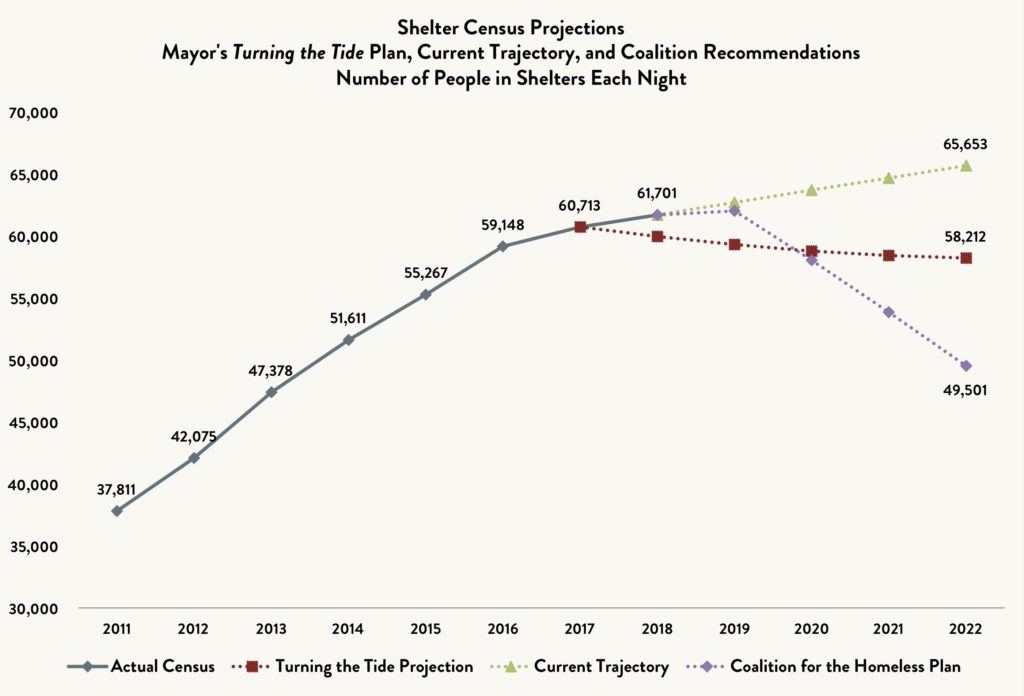 We cannot accept rising homelessness in perpetuity as the tragic, predictable, yet eminently curable consequence of New York City’s imbalanced housing market when the Mayor has the tools and resources to re-align the development of affordable housing with the actual needs of homeless and extremely low-income New Yorkers. If Mayor de Blasio really wants to make good on his One City promise before the end of his time in office, he must take bold action now to give our homeless neighbors access to the homes they need by immediately implementing the House Our Future NY plan.

[3] “The Council of the City of New York, Report of the Finance Division on the Fiscal 2020 Preliminary Plan, Department of Housing Preservation
and Development, March 22, 2019”

Methodology for the projection graph is as follows: The Mayor’s plan, Turning the Tide on Homelessness in NYC, projects that the total shelter census will decrease by 2,500 people between 2017 and 2022. This reduction is a combination of a decrease in the family shelter census that counteracts a predicted increase in the number of homeless single adults. The Mayor’s plan assumes that “the single adult census will increase at about the annual rate it has increased over the past decade” – about 10 percent per year. Coalition for the Homeless projections are based on assumptions about the number of families and single adults entering and leaving shelters each year between now and 2022. For families, new entrants will decrease incrementally each year due to increased prevention efforts; returning entrants will decrease as a percentage of all entrants each year due to increased long-term housing placements; and exits will increase immediately by 2,500 due to our recommended increases in Section 8 and NYCHA placements and then gradually increase in subsequent years as more HPD units are made available. For single adults, new entrants will remain at similar levels to 2018, but returning entrants will decrease incrementally each year as stable housing placements rise. For families and individuals, unsubsidized exits will decrease as more permanent subsidized housing placements are made. This analysis assumes an average family size of three, consistent with City assumptions.