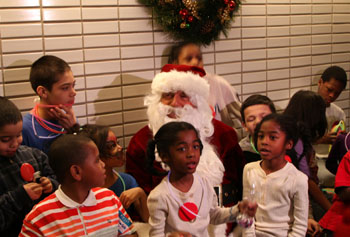 We spent the last few weeks overwhelmed by the kindness of our fellow New Yorkers as we received deliveries of toys by the hundreds each day. We completed drives with a record 35 businesses including ING, Macys, New York Life, Lightyear Capital and Rainbow Media Holding; offices; schools; and community organizations. A standout donation was from Francesca, a girl who instead of making a holiday wish list of her own, saved her money and purchased toys for the drive. She also encouraged her friends and family to do the same and with their help brought a truck load of gifts to our offices.

In all, we collected over 1,500 toys that were distributed to family homeless shelters across the city.

Volunteers from AIG, Golden Strings of Fate, Forbes, and the New York Economic Development Corporation helped wrap the hundreds of gifts for the holiday carnival that took place on December 17th at the UFT. Nearly 200 girls and boys enjoyed games, food, dancing, and gifts, as well as a special visit from Santa….or is that his special helper from Pix 11, Mr. G?

Thank you to anyone who sent in a gift, donated money, took the time to volunteer at our carnival or sorted and wrapped toys. With your help, we put smiles on so many children’s faces in a time when they need it most!

The new SoHo boutique Treasure&Bond has partnered with the Coalition to donate half of its profits from November 2011 through January 2012 toward our summer camp and after school program – with the other fifty percent also going to charity.

This innovative approach to retail and philanthropy is the brain child of Anna Wintour, Pete Nordstrom, and Catie Marron. Each quarter, Treasure&Bond will be sponsoring new nonprofits and causes related to children in New York. The first in the nation, the store’s primary goal is not to incrase the bottom line, but to “help people help people – and to do so with wit, imagination and style.”

While the store is owned by Nordstrom, it is an independently run operation, selling accessories, artwork, books, furniture, jewelry, clothing for all ages, and other odds and ends.

As you are finishing up your holiday shopping, we encourage you to stop by and take a look.

We are honored to be one of the beneficiaries of this unique project.

City officials keep trying to spin their proposed new rules that deny shelter to homeless New Yorkers. But the reality is that the mean-spirited rules would force countless homeless people out onto the streets.

Today the Huffington Post noted the rising opposition to Mayor Bloomberg’s failed homeless policies, including the recent New York City Council legal challenge of the City’s proposed new “shelter eligibility” rules for homeless single adults. (Last week a New York State Supreme Court justice postponed a hearing on the City Council’s lawsuit, as well as a similar legal challenge by Coalition for the Homeless and the Legal Aid Society, to late January, and the rules are not now in effect.)

In the wake of Mayor Bloomberg’s harsh ejection of Occupy Wall Street protesters from Liberty Park and with winter approaching, the Mayor’s failed approach to the problem of homelessness is drawing more scrutiny. As the Huffington Post reports:

[N]ow advocates for the homeless and lawmakers are taking aim at Bloomberg’s policies.

The Bloomberg administration is contending with a lawsuit from the City Council over new regulations that would require single people wishing to enter a shelter to prove they have no where else to stay — such as a friend’s or relative’s home. The councilmembers argue Bloomberg did not follow proper procedure in making the change.

Democratic councilmember Brad Lander said the city has an obligation to provide shelter during the extended economic slump. Instead, Lander said, “what [the Bloomberg administration] want[s] to do is bar the door. What an awful time to be a Grinch.”

Patrick Markee, senior policy analyst for the Coalition for the Homeless, said he was glad the Council is suing Bloomberg over the homeless policy at a time when they’re seeing record numbers of families in shelters.

“Instead of responding to this crisis by providing affordable housing assistance and embracing proven solutions to the problem of homelessness,” Markee said, “Mayor Bloomberg has proposed punitive rules that will close the shelter door to thousands of vulnerable people, including homeless adults living with mental illness.”

In response to overwhelming criticism of the proposed shelter denial rules, a mayoral spokesman continued the administration’s efforts to spin the policy as, well, as something other than what it is:

Frank Barry, an aide to Bloomberg, said the city’s policy will provide better outcomes for homeless people in New York.

“The public policy goal here is to make sure that people have shelter,” Barry said. “If there is the possibility of having shelter and staying out of the shelter system — keeping them connected to family and friends — it’s a better outcome for the individual and for the city.”

The problem, of course, is that the City’s proposed rules would deny shelter to homeless people even when they have nowhere else to go. Indeed, Department of Homeless Services Commissioner Seth Diamond admitted as much at last month’s emergency City Council hearing. Responding to pointed questioning from City Councilmember Steve Levin about a case involving a homeless man coming from the streets to seek shelter, Diamond said that the City would deny the man sheltereven if the man’s brother refused to allow him into his home — and even if the brother changed the locks on the door!

A recent Associate Press article by Samantha Gross analyzed the dangers of the City’s proposed rules, and highlighted the fact that no other city nationwide imposes such bureaucratic barriers to shelter:

Catherine An, a spokeswoman for the National Alliance to End Homelessness, said her organization was aware of no other governments with such a test for singles….

In Boston, single men and women get shelter with no questions asked. Jim Greene, director of the city’s Emergency Shelter Commission, said that’s a necessity because the system helps fill the gap created by the deinstitutionalization of the mentally ill.

“It would be a nightmare” if single homeless people were required to qualify for shelter in Boston, Greene said. “Their ability to afford housing would be non-existent. We would see many more people on the streets.”

Critics of New York’s policy say single men and women are particularly vulnerable because they have higher rates of substance abuse and mental illness than their counterparts with families and more stable attachments.

In the AP article, the Mayor and administration officials also tried to spin the rules as “reasonable”:

Mayor Michael Bloomberg and his top aides say they’re ensuring that the city helps only the truly needy….

“The city is willing to reach into its pocket and make sure that nobody sleeps on the streets,” Bloomberg said shortly after the City Council voted Wednesday to sue. “But that doesn’t mean that we’re going to pay everybody’s rent.”

However, as the article notes: “While New York officials say money is not the primary reason for the proposed policy change, it is part of an agency plan to cut back on spending.”

And more than anything, the “adult shelter eligibility rules” are really shelter denial rules. As we noted in our City Council testimony from last month, under the new eligibility rules the City can and would deem a homeless person “ineligible” for shelter:

• Even when a family member with whom the homeless person lived in the past states verbally and in writing that the person can no longer live in their home;

• Even when an outreach worker or police officer escorts the homeless person to an intake shelter but the Department claims the person has “not cooperated” with an eligibility investigation;

• Even when the homeless person is unable to provide a complete one-year “housing history”;

• Even when the homeless person attempts to document his or her one-year housing history, but the family or friend with whom s/he resided refuses to cooperate with the Department’s eligibility investigation;

• Even when the homeless person, who may suffer from a mental or physical impairment, fails to undergo an evaluation for such an impairment;

• Even when DHS investigators have never visited an alleged “housing option” to see if it is actually available and/or suitable to meet the needs of the homeless person;

• Even when the homeless person is unable to produce documentation of their income or past housing history;

• Even when the “housing option” identified by DHS is unsafe but the homeless person has allegedly failed to provide evidence of the safety hazards.