Superstorm Sandy has devastated New York City, but some of its worst impact has been on New Yorkers who were already living on the edge. Many of the hardest-hit neighborhoods – from Far Rockaway to Red Hook, from Coney Island to Midland Beach in Staten Island – are low-income communities. The storm instantly displaced thousands of poor New Yorkers, who have struggled ever since to obtain food, clothes or alternative housing. And more than a month after the storm, government efforts to shelter victims remain chaotic, leaving many in need of basic necessities and housing.

Sandy also worsened New York City’s already historic homelessness crisis.  The thousands displaced by the storm have added to the all-time record number of homeless people bedding down each night in the municipal shelter system – 48,700 people before the storm even made landfall, including more than 20,000 children.  And we have yet to see long-term housing assistance to help kids and adults who were homeless both before and after Sandy – so those numbers will continue to skyrocket.

Preventing Harm During the Storm

In the days before Sandy hit, the New York City Department of Homeless Services and not-for-profit service providers made extraordinary efforts to protect homeless New Yorkers from immediate harm. Shelters and intake centers that were located in flood zones were evacuated and nearly 1,200 homeless single adults and 300 homeless families were relocated to other facilities across the city. DHS temporarily stopped the denial of families from entering the shelter system, and a directive was issued to ensure single men and women also would not be turned away from emergency shelter.

After the storm struck, many municipal shelters were left without electricity and some without heat, particularly those in Manhattan below midtown. Many were able to operate with emergency generators while City workers and non-profit shelter providers continued to provide food and other vital services to shelter residents. 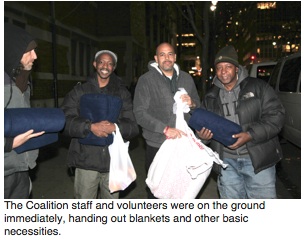 A number of other private shelters were also hit. In the immediate aftermath of the storm, facilities housing HIV/AIDS patients had no heat and had run out of blankets – their residents left literally shivering in the dark as the days wore on.  The premiere shelter for LGBT youth – the Ali Forney Center – was completely demolished. Men and women who had suffered through the storm on the streets were in desperate need of assistance. Food was scarce, and the need was dire.

As soon as the storm passed, the Coalition’s Grand Central Food Program vans hit the streets to feed hundreds of hungry storm victims, many with no power and no access to a hot meal. When the first refugees were placed in hotels and YMCAs in Manhattan, we were there with extra meals, dry clothing and warm blankets – working closely with the Legal Aid Society to provide comprehensive care to homeless evacuees.

In the dearth of any coordinated effort to monitor and ensure the well-being of those displaced by the storm, Coalition staff worked – and continue to work – 24/7 in the field, helping hundreds of evacuees – first in the makeshift evacuation shelters set up in high schools and colleges; then in the even more haphazard and unsafe evacuation shelters crowded into existing homeless shelter facilities; and since late November in dozens of hotels and YMCAs scattered across NYC. 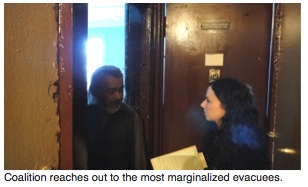 These visits revealed an increasingly chaotic and ever-shifting patchwork of shelters that failed to meet the basic needs of evacuees, which included particularly vulnerable groups like children, people struggling with disabilities and seniors.  On November 20th, a scathing front-page report in The New York Times echoed many of the findings of Coalition and Legal Aid outreach workers:  Babies, youngsters and adults crowded in cots on armory drill floors, with no cribs for infants; evacuees stranded with no money for food and no cooking facilities; and traumatized storm victims shuffled from one makeshift setting to another and another.

By Thanksgiving more than 2,000 of these at-risk evacuees were moved into hotels and thousands more into other temporary accommodations. Many still remain without food or assistance, access to medical and mental health services or subway fare to get to now-distant schools and employment.

In early December, Coalition staff found an 85-year-old woman who was placed on the third floor of a decrepit East Harlem hotel with no elevator. She was dehydrated, unable to get up and down the stairs and had to rely on one compassionate security guard – himself living in a homeless shelter – who bought her food with money from his own pocket. Coalition workers reconnected this elderly woman with her Coney Island seniors’ residence and moved her back to safety.  As December rolled on, the Coalition met scores of displaced families, unable to find affordable apartments with their FEMA grants, on the brink of eviction to the streets because their hotel stays were being terminated. We battled with government officials to get their hotel stays extended so they would not be forced into the bursting-at-the-seams municipal shelter system.

Not Yet Moving Forward

Sandy exposed and exacerbated long-standing problems within New York City’s housing market. Many of the people we’ve helped had been living in the most marginal housing – illegal basement apartments, rooming houses and severely overcrowded apartments.  Many have been found ineligible for FEMA assistance and as a result, are still left with few options.

An all-time record 48,700 people crowded the municipal shelter system each night before the storm – fully 20 percent more than last year alone.  Another 5,000 slept nightly in other public and private shelters.  And thousands more were sleeping rough on the streets and in the trains.

Yet amidst this unprecedented crisis, Mayor Bloomberg and his administration still has no plan in place to help homeless families move from shelter to stable housing.  Fueling the pre-Sandy crisis, almost 6,000 families (with 12,000 children) became homeless again after their short housing stipends – from the City’s failed short-term subsidy programs – were terminated.  Any Sandy evacuee who ends up in this system will face the same stark lack of options.  And yet Mayor Bloomberg remains adamant in his refusal to give homeless New Yorkers priority for cost-effective Federal housing assistance.

In the aftermath of this historic storm, unless leaders at every level of government move quickly to coordinate efforts and secure resources sufficient to meet both the urgent and long-term needs for housing and vital services – Sandy’s  evacuees will be swept into the record ranks of New York’s homeless.