This week the New York Post published perhaps one of the most bizarre opinion pieces about NYC homelessness ever written. The op-ed makes the wacky claim that New York City has made “huge strides on homelessness,” despite the all-time record high number of homeless children and adults crowding the shelter system.

Yesterday’s NY Post op-ed was written by George McDonald, who is now vying to be the Republican candidate for mayor. While acknowledging that there are 20,000 homeless children sleeping each night in municipal shelters, McDonald dismisses the “handwringing over such statistics,” as if those all-time record numbers don’t represent real children suffering the harmful impacts of homelessness. We found it peculiar that McDonald leads with fact that a record 20,000 girls and boys are homeless, but the solution he offers up would do next-to-nothing to help those kids.

McDonald’s op-ed states that in recent history, NYC has made “huge strides on homelessness.” Well, there’s one straightforward answer to that off-the-wall claim: 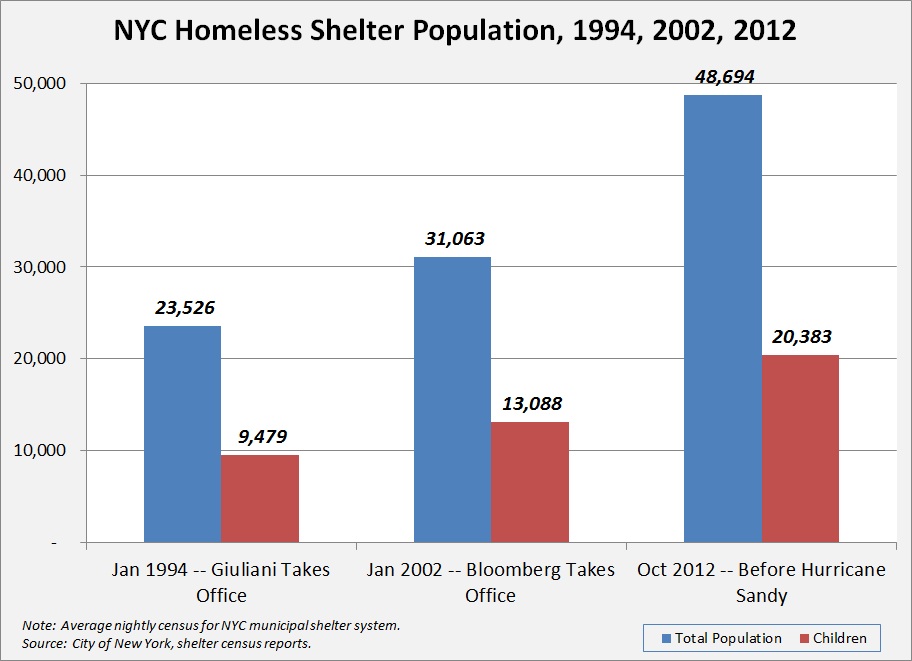 If this is what it means to make “huge strides on homelessness,” we’d sure hate to see what failure looks like.

As we’ve noted many times, one of the major causes of the current, and worsening, crisis is the fact that Mayor Bloomberg’s elimination of all housing assistance to help homeless New Yorkers move from shelter to permanent housing – a stark reversal from his predecessors.

But McDonald chooses to ignore this glaring reality. Instead, he distorts the 1992 findings of the New York City Commission on the Homeless – very peculiar since McDonald’s op-ed states that he was a member of that very commission!

In fact, the NYC Commission stated in its final report that the number one goal “for a new policy to address homelessness” ought to be:

“All levels of government must be engaged in the expansion of permanent housing options. While many of those who are homeless require “transitional” services, all need affordable housing. Moreover, transitional and permanent housing are mutually dependent; neither can succeed without the other.”

Of course we agree and have spent the last 20-plus years advocating for the much-needed increase in supportive housing in NYC touted in this piece. But the current crisis is driven largely by an explosion in the family population. They need decent housing they can afford – not on-site social services.

Investing in long-term housing assistance for homeless families with vulnerable children. THAT is how NYC can indeed make “huge strides on homelessness” – not by ignoring reality and misinforming the public.

When new federal data on the prevalence of homelessness was released last week, most news outlets reported that the total homeless population hadn’t increased and that there had been a lessening of the problem among veterans and the chronically homeless. But there is more to the story. The new data show that family homelessness continues to be an increasing problem.

From the New York Times today:

But while conditions may be improving for homeless individuals, they may be getting worse for families with children, who have costlier needs and therefore fewer housing options. Based on agency data, there were about 64,000 more people in families in shelters in 2011 than in 2007 — an increase of about 13 percent.

In New York, the problem is even worse. Between 2007 and 2011, the number of individuals within families increased by 15.5 percent and has continued to increase even more rapidly through 2012. Today, there are over 11,600 families sleeping in New York City shelters each night, including over 20,000 children. These are the highest numbers ever recorded and illustrate the growing inadequacy of Mayor Bloomberg’s response. Today, there continue to be no programs in place to help homeless families move from shelter to permanent housing and the Mayor continues to deny homeless families access to existing affordable housing resources, such as public housing and Section 8 vouchers.

Statement by Mary Brosnahan, President of the Coalition for the Homeless:

While a new national report estimates that homelessness has stayed level in the U.S. over the last year, it jumped 20% in New York City from October of 2011 to October 2012 – and that is before the impact of Hurricane Sandy.

Mayor Bloomberg has blamed national economic trends for New York’s record homelessness. But the Obama administration’s latest numbers undercut that argument. Mayor Bloomberg must reevaluate the failed homeless policies that have created a nearly 60% increase in homelessness since he took office. Most of all, he needs to end his refusal to provide affordable housing assistance to homeless families and individuals.