Last night, more than 43,000 homeless men, women and children went to sleep in New York City municipal shelters, including an all-time record 17,000 children. For many of them, it wasn’t their first trip through the shelter system. Almost four years out of the 2008 economic collapse, there are still lingering economic factors contributing to record homelessness, like the worsening housing affordability crunch. But the precipitous rise in New York City homelessness began even before the economic crisis and continues to rise more severely now due to the disastrous policy decisions made by the Bloomberg administration.

Up until 2005 and under Mayors Koch, Dinkins and Giuliani, the City’s main resource for combating homelessness was to prioritize homeless individuals and families for federal housing programs, such as public housing and Section 8 rental vouchers. For decades, these resources had been a proven, effective way to move families out of shelter and keep them stably housed. The federal housing programs were also cheaper for New York taxpayers, who pay most of the bill for the $36,000 annual cost to shelter a homeless family.

However, in 2005, Mayor Bloomberg broke from this longstanding and successful policy and cut off homeless families from receiving these valuable resources. Instead, homeless households were given City-funded short-term rental subsidies, the latest of which was called “Advantage.” These time-limited subsidies have proven wasteful and ineffective, with more than one of every three formerly-homeless families returning to seek shelter after their subsidies ended.

In continuing along the trajectory of bad to worse, the Bloomberg administration decided to terminate the Advantage program in March 2011, and refused to replace it with the successful federal programs. Now, for the first time since modern homelessness began, there is no housing assistance in place to help homeless families move from shelter to permanent housing. And compounding the problem, the City also tried to cut off Advantage subsidies for thousands of families who had already left shelter for apartments. Fortunately, due to a legal challenge by the Legal Aid Society, the City was required to continue making rental payments for existing Advantage tenants until February 2012, when a protective court order was lifted. The plaintiffs are currently appealing the case, but in the meantime, 8,000 formerly-homeless families are now at risk of flooding the already bursting shelter system.*

Advantage Recidivism
Although the Advantage program has ended, its failures continue to cause immeasurable harm to children and families, and to feed record homelessness. New data have cast a light onto the increasing problem of Advantage families returning to shelter. Four years after the start of the Advantage program, more than 3,100 Advantage families have returned to shelter at a cost of at least $106 million to taxpayers. These 3,100 families make up over 27 percent of all families no longer receiving Advantage rental assistance. 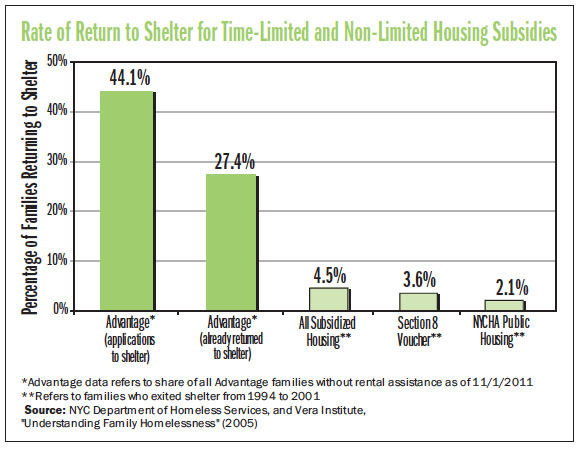 In comparison to the shelter return rates associated with permanent housing resources, these numbers are astronomical. A 2005 study of homeless families in New York found that only 3.6 percent of families who received a Section 8 voucher returned to shelter and only 2.1 percent of families who moved into public housing returned. All in all, the Advantage shelter return rate is more than six times that of longterm subsidized housing. The reason behind this is simple math. According to City data, the average rent for an Advantage apartment was $1,065. Working families that received Advantage made an average of $9.50 an hour and worked 32 hours per week. This comes to roughly $1,200 a month in income—nowhere near
enough to cover the full rent after the subsidy ended.

Furthermore, a significant portion of Advantage households receive disability benefits as their only source of income. Often, this amounts to little more than $700 a month. While these households were originally scheduled to transition to Section 8 rental vouchers after one or two years, the City
only kept that promise for a small portion of those disabled tenants. Of the 8,000 remaining Advantage tenants today, roughly 20 percent are on fixed incomes.

Recidivism Contributing to Record Homelessness
The sharp rise in Advantage families returning to shelters has been a major contributing factor to current record homelessness. Before homeless households were cut off from federal housing assistance in 2005, around 25 percent of all families entering shelter had experienced homelessness at least once before. As of late 2011, the rate had more than doubled to 52 percent. In other words, today more than half of all families entering shelter have been homeless before! 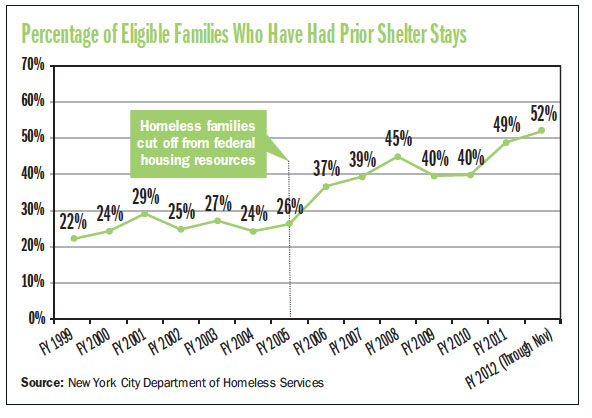 The consequences of this are apparent in the marked increase in the family shelter population since 2005, even during years when the economy was growing and unemployment was low. The number of families entering shelter reached new record levels almost every year since then. Had the shelter return rate remained constant at 25 percent, family shelter entrants would have increased only in 2009 and 2010, consistent with the prevailing
economic climate.

Moreover, the 2005 shift to providing homeless families with short-term rental subsidies has cost New York taxpayers hundreds of millions in avoidable shelter costs. If from 2005 to 2012 the shelter return rate had remained at 25 percent of all families entering the shelter system, the City would have saved $448 million dollars over the course of six years, or an average of $74.7 million each year. And most important of all, thousands of children and families would have been spared the hardships of homelessness.

Moving Forward
The sad result, if the Bloomberg administration doesn’t change course immediately, will be ever more homeless families languishing in shelters for longer periods of time with no way out. Even more tragically, thousands of families will continue to experience multiple episodes of homelessness, with thousands of children bearing the worst consequences of this instability.

The City can and should begin to address this crisis by 1) immediately targeting one in three federal housing resources to homeless families; and 2) creating a new and improved local rental assistance program modeled on the proven Section 8 voucher program.

The effects of Mayor Bloomberg’s post-2005 homeless policy decisions have been catastrophic. \The number of families experiencing multiple episodes of homelessness has skyrocketed and has been a main factor fueling record homelessness. This has resulted in millions of wasted taxpayer dollars and immeasurable suffering for tens of thousands of children.

* On June 26th, the New York State Court of Appeals ruled against the Advantage tenants. You can read more here.