The third annual Project: Back to School was a tremendous success. In total, the Coalition raised and distributed over 3,000 backpacks filled with supplies – more than double last year! 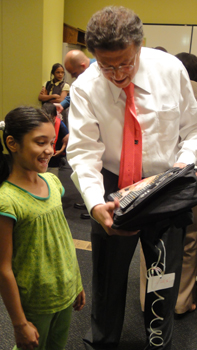 From August 23 through September 17, New Yorkers dropped off backpacks and school supplies at all Manhattan Mini Storage Locations, select Queens and Brooklyn Public Library Branches, and several elected officials’ offices. More than 26 schools around the metro area held backpack drives, as well as such New York institutions as SL Green Realty, American Express, The Kabbalah Center, Merck, and Kilpatrick Stockton. The thousands of bags, markers, pencils, pens, and other supplies were then delivered to us by Shleppers Moving.

In large thanks to websites such as The Huffington Post, which published a series of four blogs about the drive, our online campaign raised over $10,000! These added funds allowed us to purchase more backpacks and needed supplies to put us over our goal.

We’d also like to extend a special thank you to Mr. G from WPIX who was a rousing spokesperson and publicized Project: Back to School during weather segments on WPIX 11 and CBS FM, as well as online.

Every year, we strive to provide as many children as possible with the right tools to start the school year off right. The number of people who volunteered, donated money, held a drive, had their school or company participate, or dropped off supplies was inspiring.

To learn more about how you can be involved in next year’s drive, please contact Marisa Butler at mbutler@cfthomeless.org.