In April, Coalition for the Homeless released its annual “State of the Homeless” report, documenting all-time record homelessness in New York City. The report also analyzed new evidence that the Bloomberg administration’s failed homeless policies – particularly the use of flawed time-limited rent subsidies – have contributed to record homelessness. Finally, the report outlined a “One in Three” plan to reduce record homelessness by using one of every three available public housing units and Federal housing vouchers to help homeless New Yorkers move from costly shelters to affordable, stable homes – a return to a successful approach used by previous mayors but abandoned by Mayor Bloomberg.

More New Yorkers Experience Homelessness Than Ever Before

In the midst of high unemployment, the steady loss of affordable housing and years of failed policies under the Bloomberg administration, an all-time high number of New Yorkers turned to homeless shelters last year, and the New York City homeless shelter population is now larger than at any time since the City began keeping records.

• This includes a record 28,977 families, a 10 percent increase from the previous year and a remarkable 81 percent more than when Mayor Bloomberg took office.

• And by the end of February of this year, the nightly census of homeless adults and children in the municipal shelter system – 39,542 people – reached the highest point ever recorded. 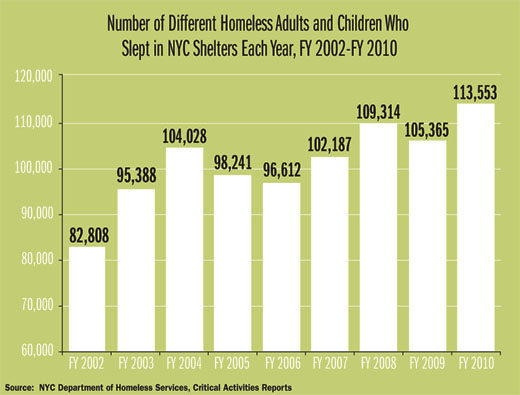 In the midst of this historic homelessness crisis, the Bloomberg administration’s only response has been to defend its failed policies. Unlike previous New York City mayors from Ed Koch through Rudy Giuliani, Mayor Bloomberg ended the use of proven and cost-effective Federal housing programs to move homeless families from shelters to stable homes. Instead, for more than six years the Bloomberg administration has replaced proven Federal programs with a series of untested, time-limited subsidies like the recently-terminated Advantage program.

The Administration’s own data show that these flawed time-limited subsidies have forced thousands of formerly-homeless children and families back into the shelter system and homelessness, at tremendous expense to taxpayers.

• Since the Bloomberg administration cut off homeless families from Federal housing programs and replaced them with time-limited subsidies like the Advantage program, more than twice as many formerly-homeless families entered the shelter system each year. 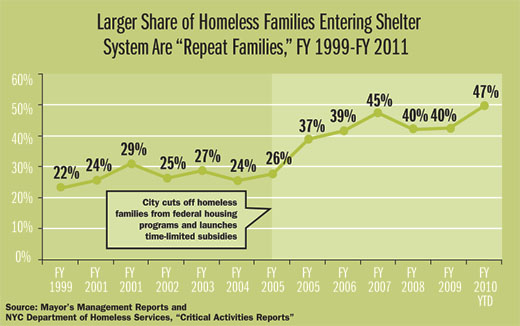 The “One in Three” Plan: How to Move Forward and Address the Crisis

With New York City confronting the worst homelessness crisis since the Great Depression, the time to reverse the failed policies of recent years is long overdue. The Bloomberg administration’s recent decision to terminate the flawed Advantage program offers an opportunity at last to abandon the
failed experiment with restrictive subsidies that have forced thousands of formerly-homeless children and families back into homelessness. Thousands more remain at risk of the same fate.

Mayor Bloomberg should draw from the lessons of previous mayors who, at various times, had to confront rising homelessness. Indeed, Mayors Koch, Dinkins, and Giuliani may have little in common, but they did agree on one thing: The smart, cost-effective, and proven way to help homeless children and families move from costly shelters to long-term, stable homes is by maximizing the use of Federal housing programs.

Coalition for the Homeless calls on Mayor Bloomberg and other City and State officials to build on the success of the past and enact the following policies:

1. Immediately begin to use “one in three” available public housing apartments and Federal housing vouchers to help homeless families and individuals move from shelters to permanent housing.

• This can be swiftly accomplished by using the existing priority system for both the public housing and voucher waiting lists and make households referred by the NYC Department of Homeless Services the highest priority applicants.

• In addition, the New York City Housing Authority should act to restore the separate “emergency priority” for all homeless households that was reduced in 2005.

• The New York City Council should require the Bloomberg administration to enact the “One in Three” policy as part of the final FY 2012 City budget agreement.

2. In coming years, the City should set aside at least one in ten City-assisted apartments created or preserved by the NYC Department of Housing Preservation and Development for homeless families and individuals.

• This policy would build on the success of Mayor Koch’s ten-year “Housing New York” program which allocated 15,000 affordable apartments

– 10 percent of all housing units created or preserved under the program – for homeless New Yorkers.

• Currently Mayor Bloomberg’s “New Housing Marketplace” plan allocates only around four percent of all City-assisted apartments to homeless people, even at a time of much worse homelessness.

You can find the complete “State of the Homeless 2011” report at the Coalition’s website, www.coalitionforthehomeless.org.