Home  Newsletter Article  What Can I Do Today to Help a Ho...

What Can I Do Today to Help a Homeless Child? 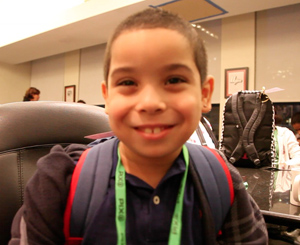 It’s a natural reaction to become immobilized when confronted with a huge problem. Time and again, I’m asked, “Yes, I’d love to help the homeless. But it seems so massive – what can I do?”

Here’s one practical tip: If you have a school-aged child, chances are, in the next couple of weeks, you’ll be buying a ton of “Back to School” supplies. My son, Quinn, is starting 5th grade and I was astonished how the list of supplies has grown over just a couple of years.

But rather than bemoaning this undertaking – take your child along with you. And while you are stocking up, explain to your daughter or son that there are a record 19,000 kids this year who are homeless and can’t afford the most basic supplies or a backpack. So buy an extra – notebook, package of pens, crayons – because whatever your child needs, there is a homeless child who is also returning to school soon who needs these basics but can’t afford them. And showing up empty handed the first week of school is just one more source of shame for kids who have already shouldered more than any youngster should.

The Coalition is partnering with the United Federation of Teachers, WPIX and many others, to put together 3,500 backpacks loaded with supplies for homeless children. Last year, we were able to give 3,000 homeless boys and girls a leg up as they started school. We raised our goal this year, because homelessness continues to soar. And, since Mayor Bloomberg now doesn’t have ANY policy in place to move families out of shelter and into permanent housing, there is no relief in sight.

Within one year of becoming homeless, 41 percent of school-aged homeless kids will attend two or more schools and 28 percent will attend three or more schools! Homeless youth are twice as likely to wind up in special education classes. Stability is a main pillar for a happy child. But as families are staying in shelters longer – up nearly 30 percent since just last year – more kids are being shuffled around shelter to shelter, school to school. Having to travel hours to and from distant schools breeds chaos. Missed meals, separation from friends and family, and constantly moving wreak havoc physically and mentally. The Coalition’s programs for kids in this edition of Safety Net bring hope and stability to these young lives. But there’s much more that needs to be done to break down the stereotypes and prejudice homeless children face. That’s where you come in.

By bringing your children into the process of buying an extra backpack full of supplies, you are also empowering them – letting them know that, first, there is a boy or girl exactly their age with no place to call home tonight. As scary as that is, they can still do something as simple and meaningful as helping that child get off on the right foot in school. Many kids put a short note in the backpack, wishing their homeless counterpart a great year – or letting them know they hope he or she loves Spiderman or Barbie (or whatever is on the backpack) as much as they do!

Most people still associate homelessness with mentally ill men and women on our streets. But homeless families represent three-fourths of NYC’s shelter population and it’s imperative that we start, at a young age, to humanize this tragedy. If our sons and daughters understand that “homeless” also means someone who looks just like them, someone who likes the same things they do, plays the same games, listens to the same songs and loves the same T.V. shows, then we are beginning to plant the seeds of empathy. Not sympathy – empathy. Let’s start young and get concrete with something specific and doable for our kids!

Learn more about Project: Back to School. Click here.